Yamaha has officially taken covers off the 2020 YZF-R1 MotoGP Replica of the Petronas Limited Edition. To celebrate 46 years of its partnership with Petronas- its principal satellite sponsor, the Japanese brand has manufactured just 46 units of this Limited Edition motorcycle. Each of these 46 units will be individually numbered.

For the development of the Petronas YZF-R1 MotoGP Replica, Yamaha Europe has teamed up with Yamaha Austria Racing Team (YART). The motorcycle sports the similar Petronas livery as seen on the racing spec- the YZR-M1 of the MotoGP bike. The bike is essentially a YZF-R1 which had been furnished with high-performance parts to bring it closer to the YZR-M1 which is the current racing bike in use by Petronas Yamaha Sepang Racing Team (PYSRT) MotoGP team and is also leading the 2020 World Championship.

Coming to the motorcycle, this special Yamaha R1 incorporated a new headlamp and new MotoGP winglets. The new R1 comes with a durable and light Genuine Yamaha Technology for Racing (GYTR) carbon fairing kit. It also comes with Petronas Yamaha SRT livery supplied by the same company that illustrates the team’s MotoGP units. 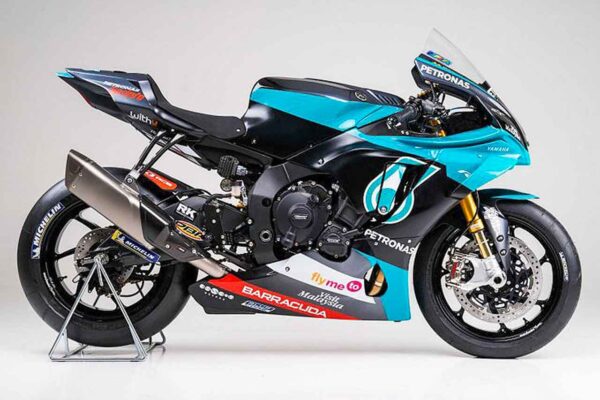 It is equipped with features that include an ECU (engine control unit), racing footrests, and quick-action throttle. It also comes with the latest rear quick-change system which makes for a faster tyre replacement. Other components present are- a factory exhaust kit, a stepped-up seat, a sloping fuel tank, a digital instrument console, a raised windshield and an all-LED lighting setup.

The Brembo made GP4-RX calipers assisted by a front remote brake adjuster and clutch lever carry out the braking duties on both the front and rear wheels. The high-performance Ohlins-sourced race suspension, including the FGRT 2 forks on the front and a TTX rear shocker assisted by a race-specific steering damper handle the suspension duties of the bike. The motorcycle stands on Michelin tyres on front and rear with seven-spoke aluminum Marchesini wheels.

As far as powertrain is concerned, YZF-R1 MotoGP replica draws its power from a 998cc, in-line four-cylinder, liquid-cooled engine. This engine is coupled with a 6-speed gearbox with assist and slipper clutch. This unit belts out a maximum power of 197 bhp at 13,500rpm and 113 Nm at 11,500rpm of peak torque. 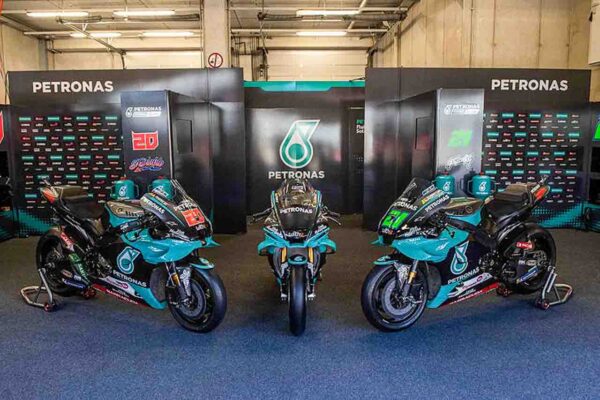 Each unit of the YZF-R1 Petronas MotoGP edition will be offered at a hefty price-tag of 46,000 pounds which roughly translates to INR 40.62 lakh and will be available only in Europe only. Along with each motorcycle, customer will get a KYT helmet, a VIP guest seat in future MotoGP races and a Petronas Yamaha SRT t-shirt. It will also provide a VIP guest pass for a MotoGP Championship later this year.