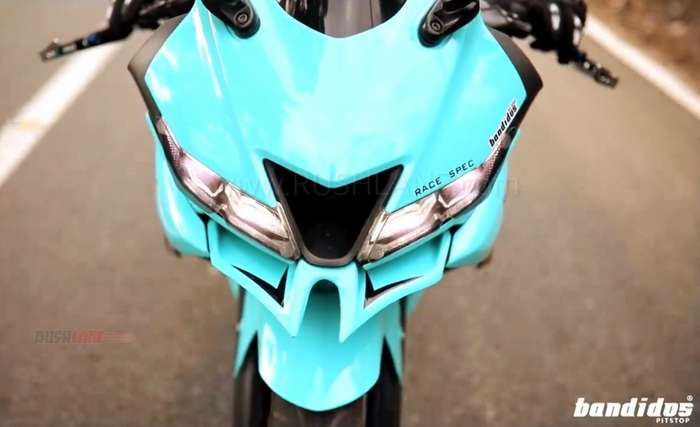 Launched in January with dual-channel ABS and priced at Rs 1.39 lakh, Yamaha R15 V3.0 has undergone quite a few modifications in recent past. R15 V3 looks stunning on its own and is one of the bestselling 150 cc sports bikes in the country.

However, bike modifiers continue to create more exciting stuff. In the latest mod job done by Bandidos PITSTOP, Yamaha R15 V3.0 has undergone some cool customizations that make the bike a lot sporty and menacing.

At the front, modified R15 V3.0 gets Bolt visor, which renders a dominating stance, similar to bigger bikes like R1 and R6. Designed with aerodynamic features, Bolt visor is appropriate for riding at fast speeds. Its unique shallow design ensures that the rider has a clear view at all times. Video below reveals it all.

Winglets have been added just below the headlight, which add to the bike’s sporty profile. Customers can choose from three winglet options – Aero, V1 and V2. Next, there’s a custom made front fender number plate holder, which gels with the new sporty visor and winglet. The bike also gets custom front kit, which reduces the size of headlights and renders a race inspired look.

Taking inspiration from what is normally seen in cars, modified R15 V3 has custom carbon-finish side mirrors with integrated turn indicators. Specially designed flush mounted LED indicators have also been added, which replace the stock turn indicators. Customers can also choose custom screen guards for headlights, which are available in multiple colours.

At the lower front, the bike gets a custom underbelly, which looks quite similar to that of Yamaha R1 M. This seems to offer good protection to exposed engine parts. To protect the bike’s frame and fairing during falls and crashes, frame sliders have been added. Made from CNC aluminium, the custom frame sliders can take quite a bit of thrashing. The bike also gets a custom radiator grille with R15 badging to protect the radiator from flying debris and other damages. 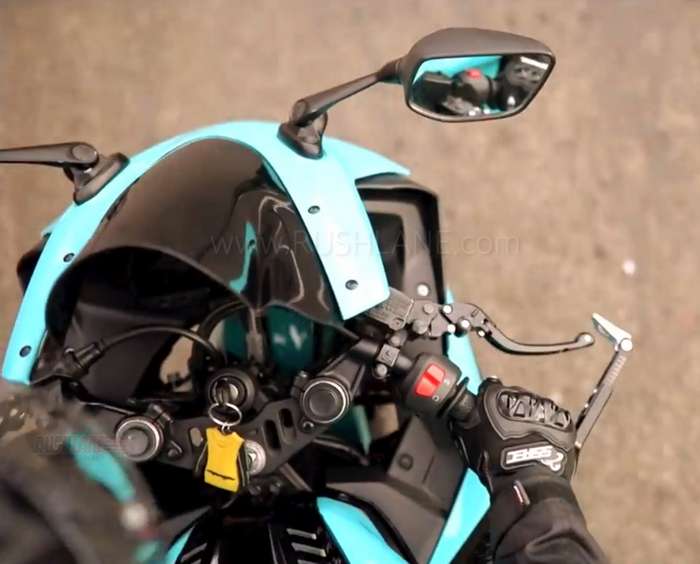 Another key addition is custom adjustable levers, which replace the basic stock units. These levers have better grip, are 6-step adjustable and come with foldable feature. MotoGP inspired lever guards have also been added to ensure added protection in case of a crash. To improve the exhaust note, a custom exhaust and bend pipe has been installed as well. The new exhaust renders a throaty aural experience, which sounds better than the stock unit.

At the rear, modified R15 V3 gets a custom outlaw tail tidy. When riding at high speeds, the rear number plate can be tucked inwards, thereby reducing drag. Powerful dual-colour LED tail lights have also been added, which look sporty and would be difficult to miss.