Bengaluru based, Yamaha India authorized dealer – Perfect Riders, have showcased a one-off customized version of the 2019 Yamaha R15 V3 Monster Energy Edition. This is not an aftermarket customization, but has been by official dealer. This particular bike is seen in a blue and fluorescent green color scheme and is making its way to a buyer in Manipal.

Based in Bangalore, Perfect Riders is a Yamaha India dealer, who claims that they can deliver any Yamaha motorcycle with custom design. Earlier they had delivered custom MT15 in white and orange colours from KTM Duke 390 to an owner in Bangalore. The dealer assures delivery across India.

2019 Yamaha R15 V3 Monster Energy Edition you seen here, sports changes which are purely cosmetic and does not include any engine upgrades. The colour scheme is the only modification along with racing spec stickers from Motul Energy, Fiat, Kespersky, Eneo, Ferrari and Infiniti. Watch the detailed walkaround video by Youtube channel MotoMahal below.

In Indonesia, 2019 Yamaha R15 V3 Monster Edition is priced at Rp 36,360,000 (approximately Rs.1.78 lakhs). Paying tribute to and borrowing inspiration from MotoGP superbikes of Valentino Rossi and Maverick Vinales, the Monster Energy Edition is offered in dual colors of black and blue with ‘Monster Energy’ branding seen on its front fenders, fascia and fairing. It also gets ENEOs badging with Yamalube decals. The side fairing has the biggest M moniker in fluorescent green. 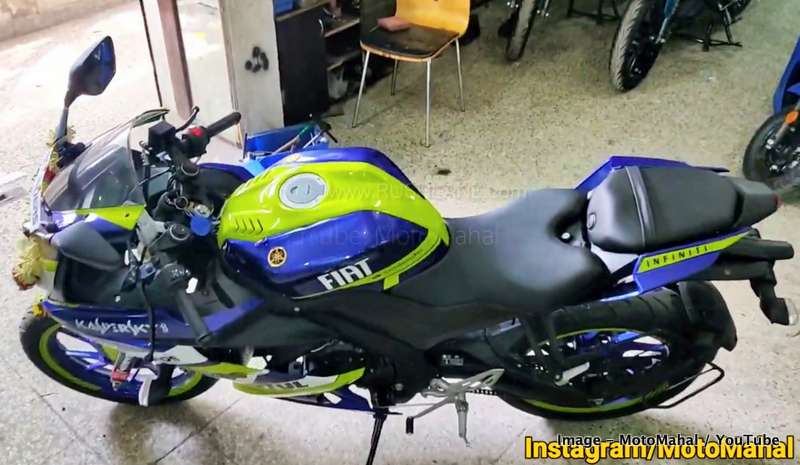 In terms of features, it will be similar to those seen on the current Yamaha R15 V3 with full LED head and tail lamps, split seats and a fully digital instrument console. In Indonesia, R15 gets upside down telescopic forks in the front along with an aluminum swingarm while the India spec model will receive conventional telescopic forks in the front along with a standard alloy wheel design. Single disc brake will be on offer at both ends, with dual ABS.

The Yamaha R15 V3 in Thunder Grey and Racing Blue is priced at Rs.1,39,680 while the Darknight color option is priced at Rs.1,41,680, ex-sh. One can expect the 2019 Yamaha R15 v3 Monster Energy Edition to be priced marginally higher than these two options and it will also probably be a limited edition like the 2018 Monster Edition from last year.