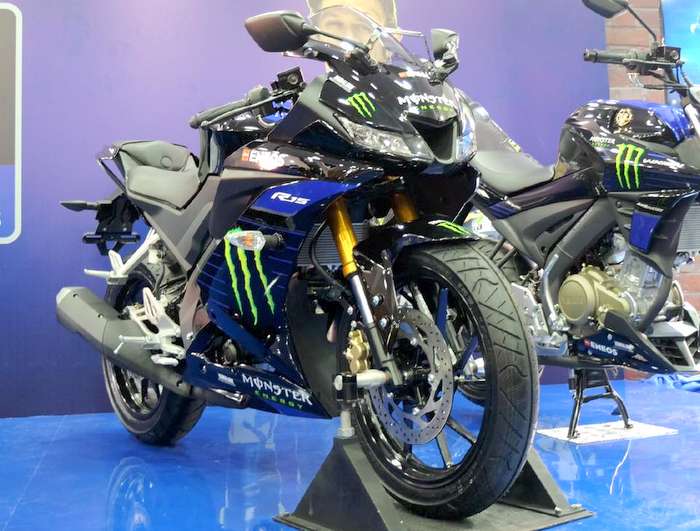 2019 Yamaha R15 V3 Monster Energy MotoGP Edition has just been launched in Indonesia at Rp 36,360,000 (approximately Rs 1.78 lakh). It will be launched in India next, ahead of the festive Diwali season.

Yamaha R15 V3 Monster Energy MotoGP Edition is presented in a dual color scheme of blue and black. It gets black paint on body panels and blue highlights on fairing and fuel tank. Branding of ‘Monster Energy’ is seen on its front fender, fascia and fairing and it also gets ENEOs branding, official sponsors of Yamaha’s factory racing team in MotoGP championships, and Yamalube decals. 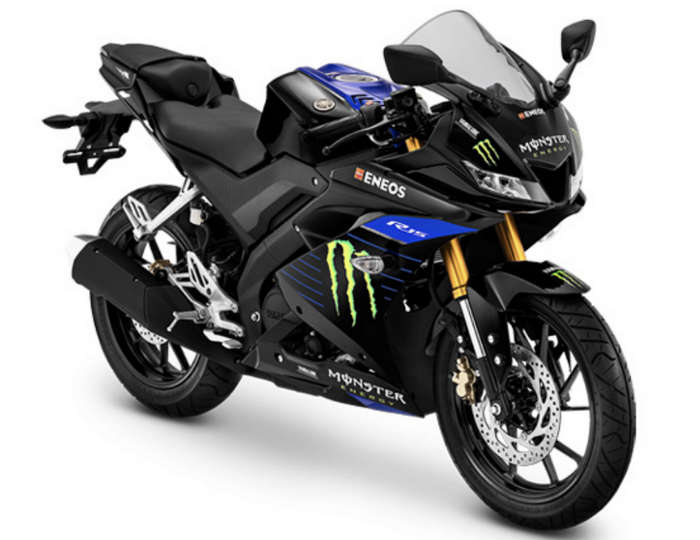 All features remain the same as seen on the Yamaha R15 V3 as on date in India. This includes full LED headlamp and taillamp, split seats and a digital instrument console. The Indonesia spec model gets upside down telescopic front forks and aluminum swingarm while when launched in India it will be seen with conventional telescopic forks in front.

No changes have been made to the engine. 2019 Yamaha YZF-R15 V3.0 Monster Energy Yamaha MotoGP Edition continues to be powered by a 155cc, liquid cooled, 4 valve, FI engine with VVA technology offering 19 bhp power at 10,000 rpm and 15 Nm torque at 8,500 rpm mated to a 6 speed gearbox. It comes in with dual channel ABS as standard and braking via single disc brakes at both ends.

In India, the standard Yamaha R15 V3 is available in colour options of Thunder Grey and Racing Blue priced at Rs.1,39,680. It also gets a new Darknight colour scheme, priced at Rs.1,41,680. Next, it will get the Monster Energy MotoGP Edition, which will be priced marginally higher. Yamaha India had launched the R15 V3 MotoGP edition last year as well. It was sold as a limited edition of 5,000 units. All of which were sold off quickly. Expect a similar strategy this year around for the 2019 model year R15.