Yamaha R15, a bike which is versatile for modifications, has once again been modified to reach higher speeds. This is a Thai spec model which has been given an aftermarket turbo unit which has resulted in a substantial increase in its performance. The accompanying video shows off the modifications done while the turbo hum emitted is also to be noted taking the Yamaha R15 to an all new speed limit of 180 kmph, despite the fact that it sports only a 150cc engine.

Yamaha R15 fitted with this aftermarket turbocharger sees testing being done to show off its power and performance. It may be seen at the end of the video that power output of the R15 is at 22.9 hp which is a significant boost as compared to the 19.2 hp power offered by the 155 cc single cylinder, liquid cooled engine while torque figure remains at 15 Nm. 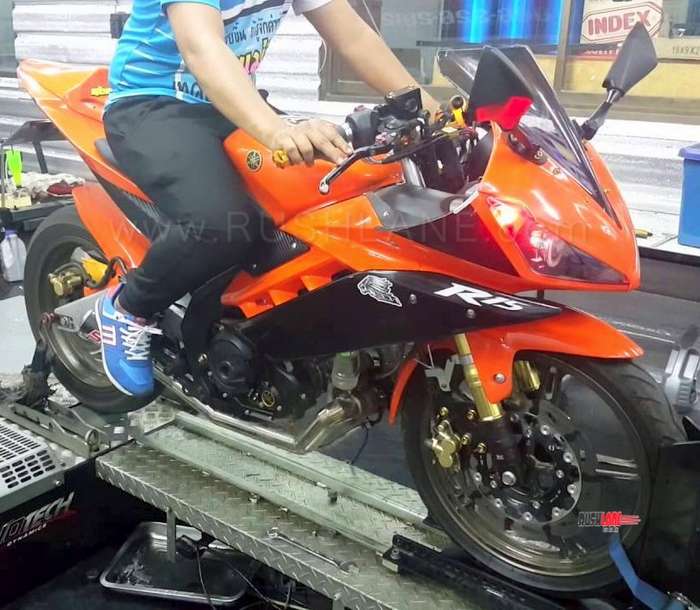 It is exclusively the fitment of the new turbocharger that allows for this performance. Turbocharging an engine ensures forced induction to the engine. It is commonplace in cars where it is seen to allow for a lower displacement engine to offer higher power.

The turbocharger needs to be properly installed and efficiently calibrated to ensure optimum performance. While commonly seen on cars, turbocharging on bikes is a rarity due to the fact that turbo lag causes some concerns on bikes as engine speeds on bikes changes more rapidly that on cars.

Though the Yamaha R15 is shown achieving a top speed of 180 kmph, its actual performance in rear world conditions should be noted with regard to engine cooling, etc. The top speed at 180 kmph is also achieved in a closed area of testing ground where there is no wind resistance.

The modified R15 immediately draws ones attention with projector headlamp in addition to dual LED headlights, tinted windscreen and sporty graphics. The bike is also fitted with MotoGP lever protectors, SC-Project exhaust which enhances the bikes appeal and custom blinkers installed next to the tail lamp.