Yamaha YZF-R25M in the works to rival Kawasaki Ninja 25R?

Unlike the regular inline-twin Yamaha YZF-R25, the new YZF-R25M is a quarter-litre inline-four motorcycle aimed at track performance

With its debut, Kawasaki has reintroduced the forgotten segment of low-capacity multi-cylinders sportsbikes meant for those who love to ride at machine-limit. Chances of it coming to our market are low since Kawasaki India is concentrating on localising its existing portfolio. Alongside the new Kawasaki Ninja ZX-25R, the company unveiled its track-only sibling, Racer Custom as well as an exclusive carbon fibre package dubbed ‘Race Spec’. The kit almost makes it look like the all-out Ninja ZX-25R Racer Custom.

For a brief period, this modern-day niche class of 250cc i4 faired motorcycles was solely represented by the ‘baby 10R’. However, it seems that Yamaha Motor wishes to join the party with its all-new YZF-R25M (rumoured name). It is worth mentioning that the regular Indonesian-spec YZF-R25 is a ~250cc inline-twin (not to be confused with a parallel twin). Certain sources also claim that Honda Motorcycle is working on the CBR250RR-R. Again, the existing CBR250RR packs two cylinders less.

At the moment, minimal details are known about Yamaha’s entry-level four-cylinder sportsbike. It would most likely hit Indonesia first before being filtered down to other potential markets across Asia and maybe Europe. Usually, Yamaha’s sports or super sports models with an ‘M’ tag are primarily focused on racetrack performance. Inspiration comes from the brand’s MotoGP division that employs the multi-time championship-winning race bike, Yamaha YZR-M1.

To date, there has not been an official statement regarding its development, but many remain certain that an R25M is happening. Yamaha’s YZF-R25M could be a result of the overwhelming response received by Kawasaki for its latest quarter-litre four-cylinder product. 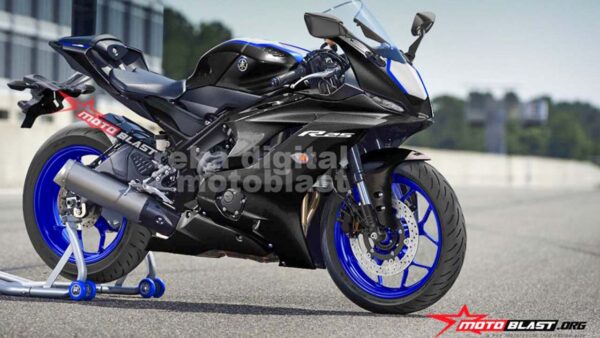 Kawasaki has clearly set a high benchmark with the ZX-25R. It makes 49bhp @ 15,500rpm and 22.9Nm @ 14,400rpm from a 249.8cc liquid-cooled DOHC inline-four motor. This is mated to a 6-speed transmission, accompanied by an ‘assist & slipper clutch’ and quickshifter. Hence, one can expect the upcoming YZF-R25M (and CBR250RR-R) to churn out more than 45bhp while screaming in mid-five-digit RPMs.