For the first time in India, a petrol pump will dispense 100 Octane fuel

Indian Oil has now launched XP100 which happens to be India’s first 100 Octane petrol. The high quality fuel has now become the fuel with highest Octane number which is being sold across the country. Indian Oil will be targeting high end car and bike owners who are usually on the look out for premium fuels for their imported vehicles.

The new XP100 is priced at INR 160 per litre (rates for Delhi). In comparison the standard 91 Octane petrol is currently being sold at INR 82.34 per litre, which makes the XP100 around INR 77.66 more expensive than the standard petrol.

In the first phase, Indian Oil will be selling the XP100 in select outlets across 10 cities. The cities of the first phase include, Delhi, Noida, Gurgaon, Agra, Jaipur, Mumbai, Pune, Chandigarh, Ahmedabad and Ludhiana.

In the next phase of expansion, 5 more cities, Kolkata, Hyderabad, Chennai, Bangalore and Bhubaneswar will get added from a later date. The above 15 cities house a considerable portion of luxury cars and bikes in the country and hence have been cherry-picked accordingly.

Shrikant Madhav Vaidya, Chairman, IndianOil, stated, “XP100 is an ultra-modern, ultra-premium product designed to thrill your senses. It is the finest grade of petrol to give your vehicle higher power & performance and give you a delightful drive.” XP100 will be produced at Indian Oil’s Mathura refinery. IOCL will be employing its indigenous OCTAMAX technology for the refining process. 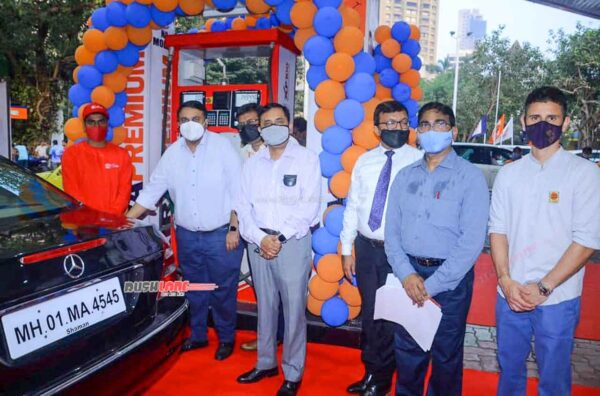 Across the globe, there are just select countries in which 100 octane fuel is available. These include countries like USA and Germany. With the launch of XP100, India has joined this niche group of countries.

Octane Number and its relevance

The Octane number of a fuel relates to its resistance to knocking, which is a condition in which the fuel auto-ignites itself inside the combustion chamber due to the pressure and heat. Knocking can be detrimental to the health of the engine in the long run and hence needs to be avoided.