And without doubt, for me it has been the Triumph Street Triple. And I believe similar emotions are shared by journos and critics across the planet who have appraised this three banger streetfighter since it’s inception for over a decade. The Striple as its affectionately known is an exemplar for striking the right balance of everything into creating a package that’s a winner on every count.

I remember having ridden the previous gen and the infamously detuned 675 which despite its trimmed engine grunt- still made me feel like a Samurai of the streets. The delirious engine wail, mind baffling mid-range, telepathic directional changes and gobsmacking brakes-, it’s still afresh. So when I was handed over the new Triumph Street Triple 765S- in a lighter and more powerful package, it was but hard to resist playing Street Samurai again.

The devil is in the detail 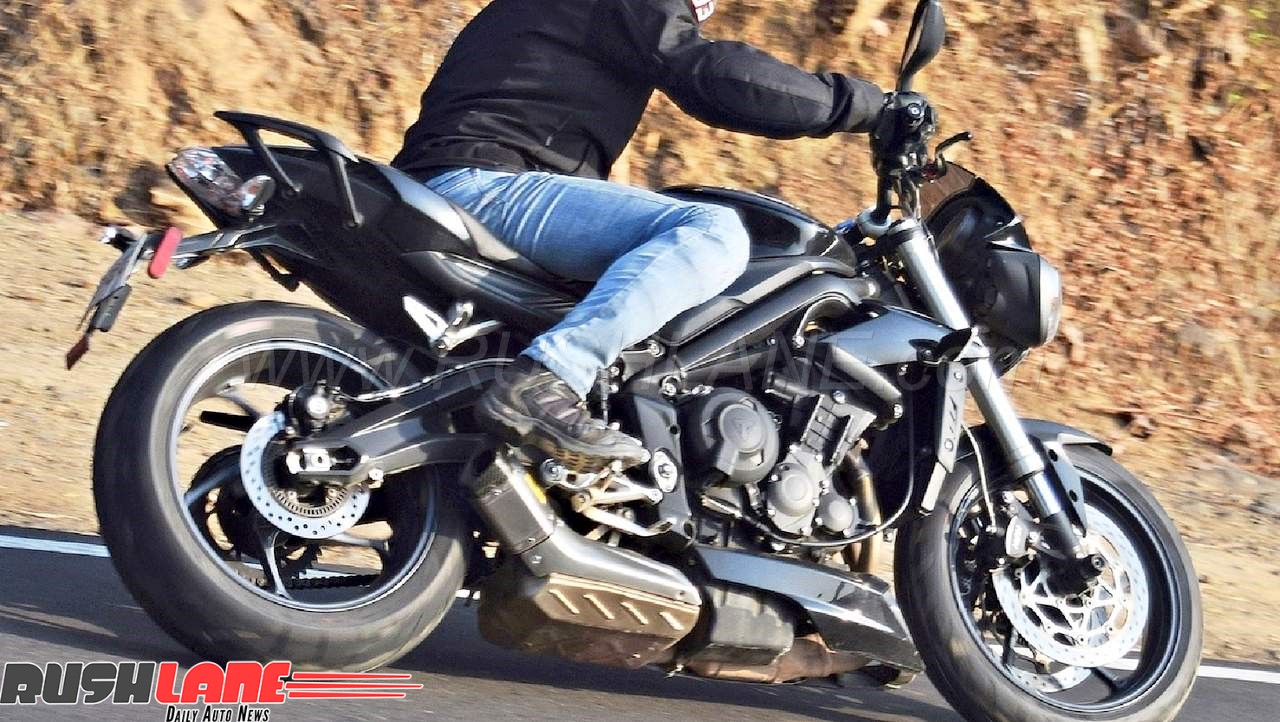 Engine and gearbox– The Daytona motor is bored out to 765cc with a huge jump in horsepower with 111.5 bhp @ 11250 rpm and twisting force reading 73 nm @ 10421 rpm. The six speed gearbox is smooth and effortless to operate.

Quickshifter – An optional equipment on the S model, Triumph claims with the quickshifter in place and in the hands of a skilled rider- upshifts are 2.5x quicker than a conventional clutch assisted upshift. However we found the shifter to be effort oriented requiring extra inputs from the foot.

Brakes – The Nissin 2 piston caliper mounted over twin 310mm discs might not sound top-drawer, but lends precise and compelling stopping power to the motorcycle. At the rear is a single 220mm disc grabbed by single pot Brembo caliper.

Chassis– The twin-spar chassis is carried over from the earlier generation motorcycle with new mounting points. The all-new gullwing swingarm is claimed to to increase longitudinal torsional stiffness in addition to looking cooler than the pre-gen design.

Electronic Rider Aids– Ride by wire throttle offers precise fueling and engine response mated to ROAD and RAIN ride modes. Traction control is switchable, but its a bit intruding in ROAD mode for anybody’s liking. ABS comes standard and would only kick in case of being overtly adventurous on the brakes.

Headlamps – Triumph has given the Street Triple a more likeable rather acceptable face in the new model with refreshed headlights. LED daytime running lights are placed at squinting positions inside the headlamp assembly- but hard to notice in broad daylight.

Dash & Switchgear – The analog-digital dash console has been carried over from the Speed Triple series displaying speed, engine revs, gear position, selected ride mode fuel gauge and consumption, odometer and twin trip meters. The switchgear on the left comes with toggle buttons to switch between numbers and riding modes.

Beauty lies in the eyes of the beholder 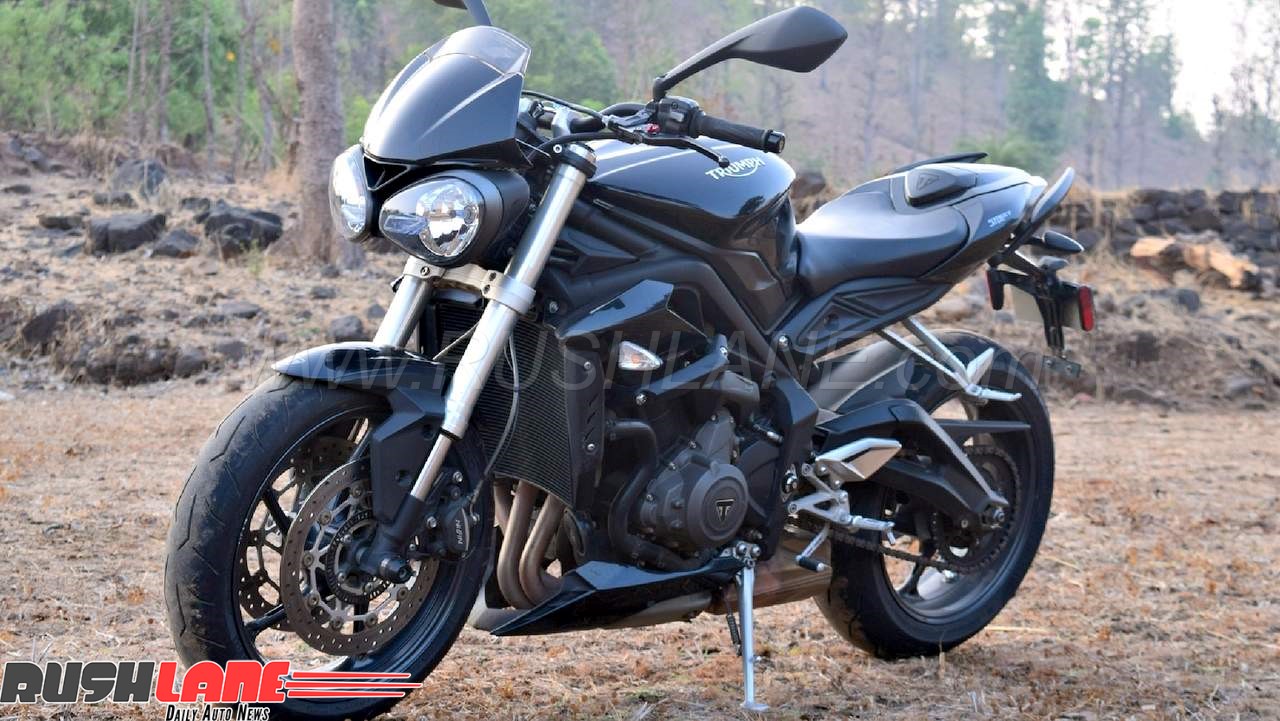 The bug-eyed appearance may prompt an onlooker to hit the DISLIKE button right away, with the minimalistic bodywork might not even get the Street Triple 765S a qualifier place in a beauty contest- but then it’s the way it has always been. The overall design with the new twin headlights won’t set your pulse racing- which something like a Z900 might, but the new face won’t ruffle up your eyeballs as the earlier models did. In the end, the Street Triple could well be described as an SAS Sniper in a delusory formal attire.

The new Street Triple 765 carries over it’s proportional legacy with a compact design. It looks no bigger than a regular 150cc street bike and weighs nearly as much. But with an expounded Daytona motor now displacing 765cc with 111.5 bhp of peak power- the performance would get your grinning muscles sore. And the similarities with a small street bike isn’t confined to dimensions alone, the Street Triple S is one of the easiest machines on the planet to ride around. The riding stance is marginally forward canted, but the overall ergos make for a comfortable riding experience.

Riding the motorcycle from Triumph’s Pune dealership till Mumbai reflected adequate testimony not only on comfort, but the overall performance. Crawling out of Pune traffic to the open highways and later hitting the bends at Khandala, the Street Triple S feels like an ultimate swiss knife of motorcycles- it can do just everything you throw at it without compromising on any facet. The engine is an eager smooth spinner- though it might feel slightly buzzy in comparison to something like a Z900, but it adds to the exhilaration while riding the motorcycle.

Home is where the heart is

Delight would be an understatement if the engine has to be described- its a freaking stonker of a unit. If inline fours are symphony, the Triple is an electrifying rock show. The intake howl and the eargasmic exhaust note would send caramel flowing through your ears while your heartbeats soar to the higher orbit. With the new exhaust system in place, Triumph has ensured that owners won’t need to spend on an after-market and stay satisfied with the stock unit. Though the review bike came installed with an Arrow can, we had ridden a stock Triple S earlier and we’d say the stock is still a great sounding unit.

Getting into momentum, there is ample grunt available right from the word go with the shorter first and second gear ratios making the Triple an absolute Falcon. The power delivery though linear cranks out in overzealous urgency and that makes the Triple S such an exciting motorcycle to ride. You’d never feel starved of power when needed and just a whack of the throttle at any rpm would send numbers tumbling. However we weren’t pleased with the traction control trying to poke into our share of fun with the motorcycle. While the conservative intrusion in RAIN MODE was understandable, but too much ingress into the ROAD MODE is somewhat of a put off when you’re in mood for a rip-zip affair- though thankfully its switchable.

Engine heat feels well controlled under regular conditions and only starts to show up only while exposed to a bumper-to-bumper scenario. The clutch feels light and the gearbox is a silky operating unit offering effortless scroll through the transmission. The motorcycle offered to us came with a quickshifter, but had a knotchy feel to it when compared to the conventional clutch operation shifts.

In the end it’s all a question of balance 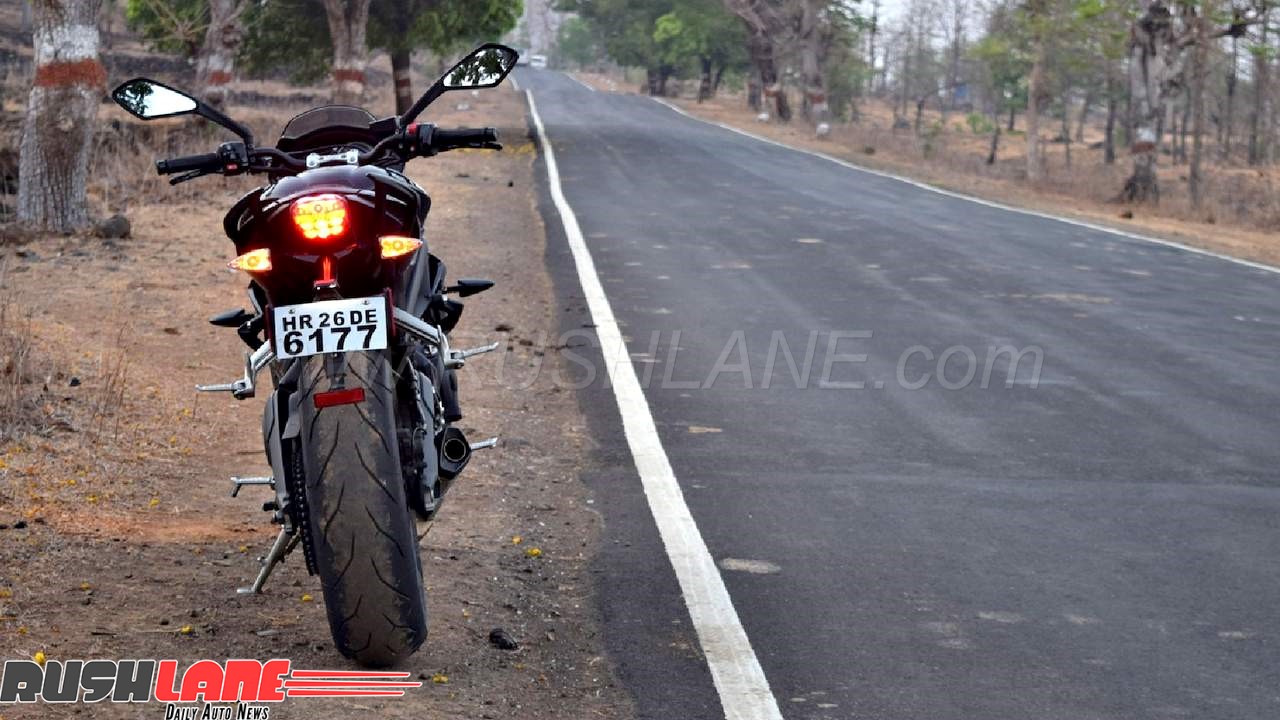 Riding comfort comes as a surprise on the Street Triple S- as one would expect a stiffer setup on a motorcycle that offers near supersport handling traits. The spaced out handlebars and a slight lean forward riding position makes for a sporty yet comfortable posture. The 41mm Showa front forks are non adjustable but imparts enough travel to keep jitters and jolts at bay. The preload adjustable rear Showa monoshock alongwith a comfortable saddle keeps the comfort quotient well balanced at the rear end. The windblast does dart into you over 140 kph- but duck a bit and it keeps surging even while past the 200 kph mark. The Triple S in our hands maxed out at 219 kph, as we ran out of straights to push further while the motorcycle showed impeccable balance when pushed to the limit in a straight line.

Handling and agility has always been the forte of the Street Triple range- it indeed is a race machine stripped off all the aero-attire. From straight line stability at the top end to going around bends as if running on rails- the Street Triple has to be one of the best if not the best handling motorcycles out there. It seems to possess extrasensory characteristics- as throttle and steering inputs are responded in an instant and precise manner leaving you both in delight and amaze. The suspension despite being supple enough to iron out ripples maintains composure under all round riding conditions. Brake mid-corner and there’s not a hint of the front dive or chatter- the Triple S wraps in everything, forgives your erroneous inputs and marches on. Road grip hasn’t been compromised either with Triumph lending the Triple S with a set of Pirelli Diablo Corsa tyres that offer leech-like hold to the tarmac. The brakes are no different and they might not be as top-drawer as the M50s on the range-topping RS, still offer fabulous stopping ability. ABS comes standard, but not even once did we encounter the system kicking in- the brakes were that good. Hard to find a cribbing point on this motorcycle! That gets us thinking as to what the RS would be to ride.

We could possibly go about singing praises on what a lovely motorcycle the Triumph Street Triple S is – but we’d choose to keep our emotions in check. To conclude-we’d say that the Street Triple S is one terrific package. A pick-and-shoot road machine with performance that’ll blow your caps off- it’s your ticket to instant gratification. Be it commuting, corner carving, out of town trips or hitting the race track- the new Triumph Street Triple S would exceed every expectation. I feel its pretty fair to crown it as the jack as well as the master of all trades and we possibly cannot think of any other motorcycle which covers a wide spectrum of performance that a Street Triple does. At INR 9,32,500/- (ex-showroom Pan India)- it’s expensive than the competition, but at the given price you just aren’t buying a motorcycle- but a benchmark and the performance that recompenses every rupee you’ve spent on buying one.