The wait for 2019 Bajaj Dominar is turning into an exciting one, with many making enquiries, and waiting the wait. From the house of Bajaj, 2019 Dominar 400 is the first bike to feature USD (Upside Down) forks.

While Bajaj Dominar is a reasonable bike in its segment, its sales haven’t been all that promising with monthly sales numbers ranging within 700 to 1,100 units. Nov 2018 sales hit record low at 170 units. 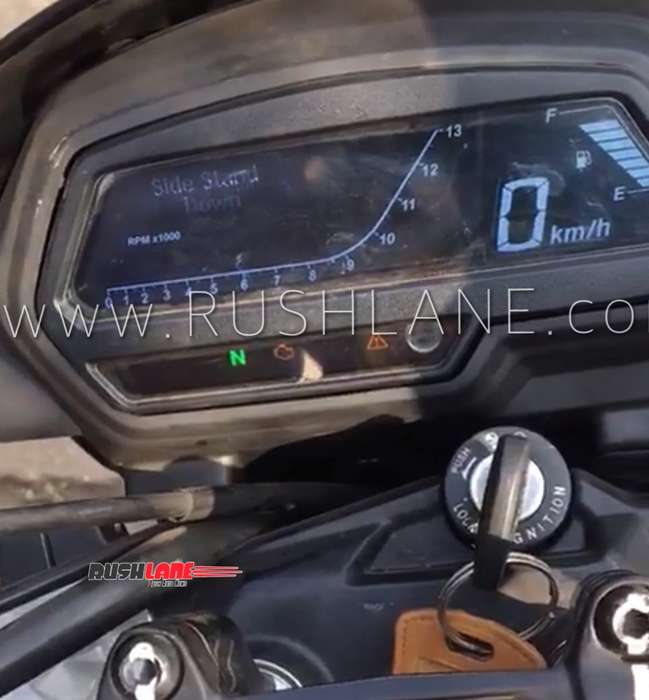 For Bajaj, that should be a reason to worry considering the company had banked on its sales and estimated monthly sales of 10k units at the time of launch. That day hasn’t arrived. Even its single focused advertising and marketing didn’t deter buyer from buying the bike they refer to as ‘haathi’. Despite showcasing Dominar as a best value for money offering, customers weren’t buying it.

This could quickly change for the better. In recent months, 2019 Bajaj Dominar 400 has been spied on test numerous times as it’s being readied for launch in Q1 2019. Updates to the bike aren’t just cosmetic, and mechanical newness is a given. The exhaust is now larger, and sounds different.

The latest video shows the new Dominar in detail. As per sources, the video was shared by the test rider of Bajaj Dominar himself, and shared with curious bikers who were surrounding the new Dominar.

The video shows new details. The radiator is bigger, and rearview mirror stalks are redesigned. The full LED headlamp is carried over. Standard features include a fully digital instrument cluster which now shows more information than before, dual disc brakes, ABS, and slipper clutch. The bike runs on 17” alloy wheels fitted with tubeless tyres.

2019 Bajaj Dominar also carries over its 373cc, liquid cooled, single cylinder engine that has until now returned 34.5 bhp power and 35 Nm torque. The new updated version is likely to change those power figures for improved performance.

As new emission norms become mandatory from April 2020, it’s like the engine mated to a 6 speed gearbox with slipper clutch will be BSVI compliant. New colour choices will be offered, and the price tag would be dearer by upto 15k. Current model price is listed at Rs 1.63 lakhs for the ABS variant. Non ABS Dominar variant has been discontinued.