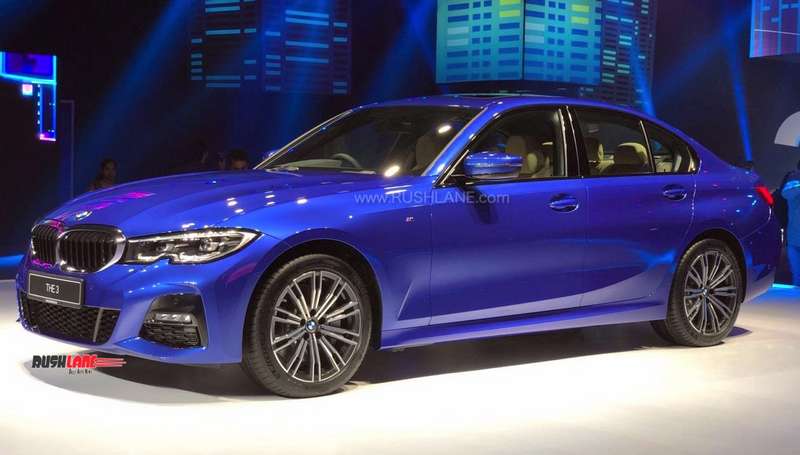 The all-new G20 BMW 3 Series has been launched in India with a starting price of INR 41.4 lakhs (ex-showroom). The new generation luxury sedan is a significant step-up compared to the outgoing model in pretty much every respect. The 2020 3er is widely considered to have set a new benchmark in its segment and this is a significant claim, especially considering that the segment is populated by highly talented sedans like Mercedes C-Class, Audi A4, Jaguar XE, and so on.

The 2020 BMW 3 Series is based on the Group’s Cluster Architecture (CLAR) platform which employs improved materials (high tensile steel and aluminium) to achieve stringent weight targets (lighter than the old car by 55 kg) despite being considerably larger than its predecessor. The styling too is significantly modern without departing from the familiar traits. Interior is a huge improvement in terms of design, technology and space.

Let’s see how the new BMW 3 Series compares against its rivals – Mercedes C-Class, Audi A4 and Jaguar XE – in the Indian context. 2019 BMW 3 Series vs Mercedes C Class vs Audi A4 vs Jaguar XE. 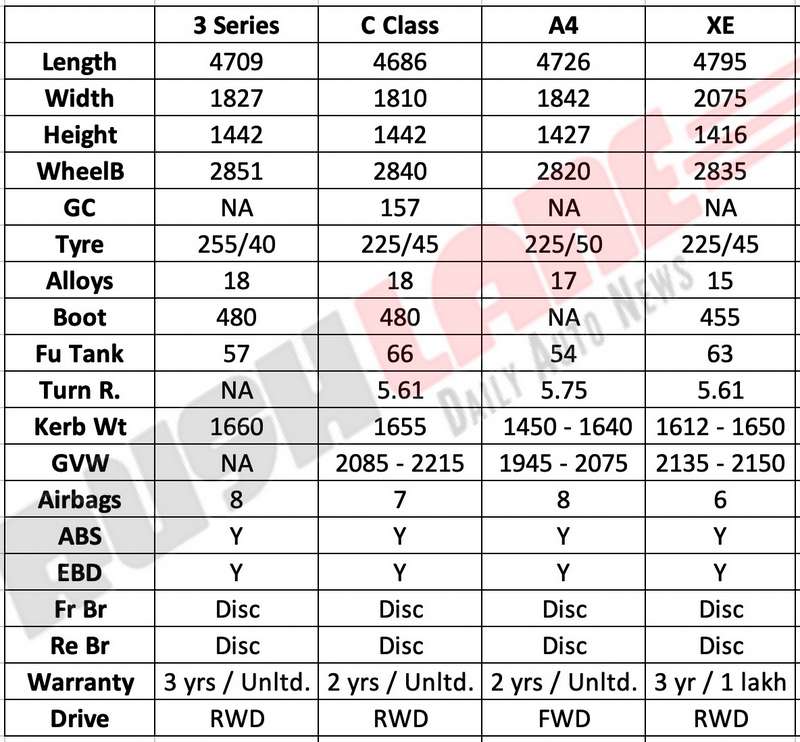 Starting with the dimensions, even though the new 3 Series is larger than the previous gen model, it still continues to be the shortest sedan in its class at 4,709 mm. At 4,795 mm, the Jaguar XE is the longest of the lot. However, when it comes to wheelbase which is a better indicator of interior space on offer, the Beemer leads the way with 2,851 mm. The A4 has the shortest wheelbase at 2,820 mm while the C-Class and XE stand at 2,840 and 2,835 respectively. The Jag is significantly wider than the competition. If fact, its the only car that is over 2m wide. Despite the aggressive weight shaving, the BMW still ends up as the heaviest car in its class but only by a small margin on 10 kg which is nothing if you factor in the whole horde of goodies on board.

The increase in dimension has allowed the BMW to match C-Class in terms of boot space (480 liters). While the Audi’s capacity is not officially mentioned in the spec sheet, the Jaguar offers 455 liters of boot space. All the four cars are equipped with fuel tanks large enough to handle really long journeys but C-Class tops the chart at 66 liters.

The tyre section of 255 is the segment norm but the aspect ratio varies from 40 to 50 with the new 3 Series having the lowest profile and A4 having the highest. BMW continues to prioritize sporty handling. Interestingly, the Jaguar XE comes with rather small 15-inch wheels while both Mercedes C-Class and BMW 3 Series sit on 18-inchers. The Audi A4 settles of 17-inch units. 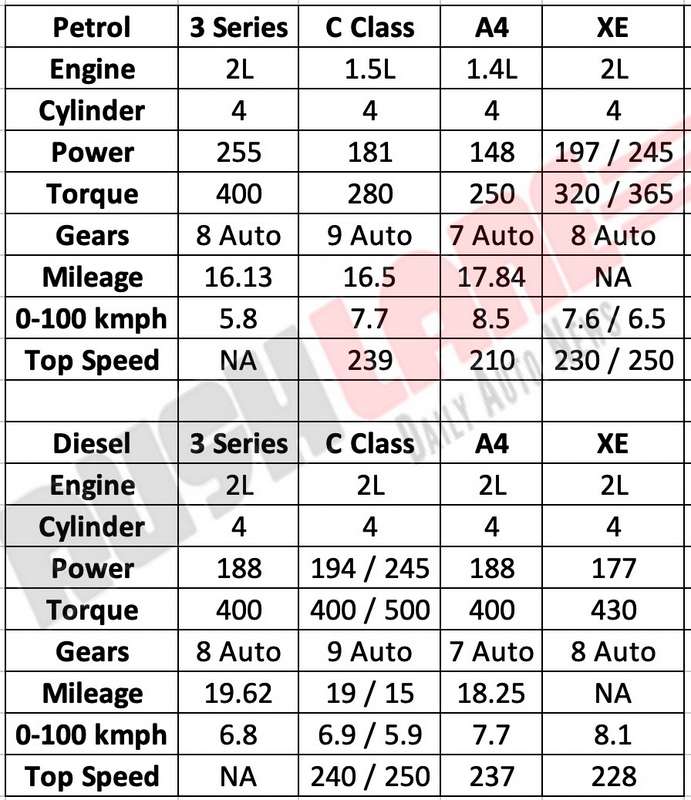 All the four cars feature a comprehensive list of safety equipment as per the expectations of customers in this segment but the 3er and A4 lead the game with 8 airbags while C and XE settle for 7 and 6 respectively. Being the most modern car of the lot, the BMW also offers a lengthy list of ADAS (Advanced Driver Assistance System) features.

Coming to performance, the diesel engines of these sedans are in the same ball park but the output figures of petrol engines vary significantly. Speaking of petrol engines, the BMW and Jaguar adopt 2-liter turbocharged engines with outputs of 255 hp and 245 hp respectively. If you prefer fuel economy over outright power, the XE also offers a 197 hp unit. The Audi A4’s puny 1.4-liter TFSI petrol motor dishes out 148 hp, making it the least powerful petrol sedan in this comparo. The Mercedes C-Class attempts to strike a balance between power and economy with a 1.5-liter 181 hp petrol motor.

All the four sedans are powered by 2.0-liter four-cylinder diesel engines. At 188 hp, Audi and BMW have identical power outputs while the Mercedes edges past with 197 hp on store. If that’s not enough, a 245 hp version is also on offer. The Jaguar makes do with 177 hp. The C offers 9-speed AT, 3 Series and XE prefer 8-speed units while A4 settles for a 7-speed box. The A4 is the only FWD car in the mix.

Let’s talk about money. The Mercedes C-Class emerges as the most affordable vehicle in the class with an entry-level price point of INR 39.9 lakh. The Jaguar XE starts at INR 40.6 lakh while the base BMW 3 Series will set you back by INR 41.4 lakh. The Audi A4 has the highest base price at INR 41.5 lakh (all prices are ex-showroom).

The new BMW 3 Series looks set to provide a significant volume boost for the company in India. The Audi A4 recently received a significant update in the global market and is expected to be updated in India in the coming months, making it the rival to watch out for. The Mercedes C-Class traditionally has been a strong seller in India but may face a bit of pressure from the new arrival. Things have become even trickier for the Jag which has been struggling to match its German counterparts in terms of sales.