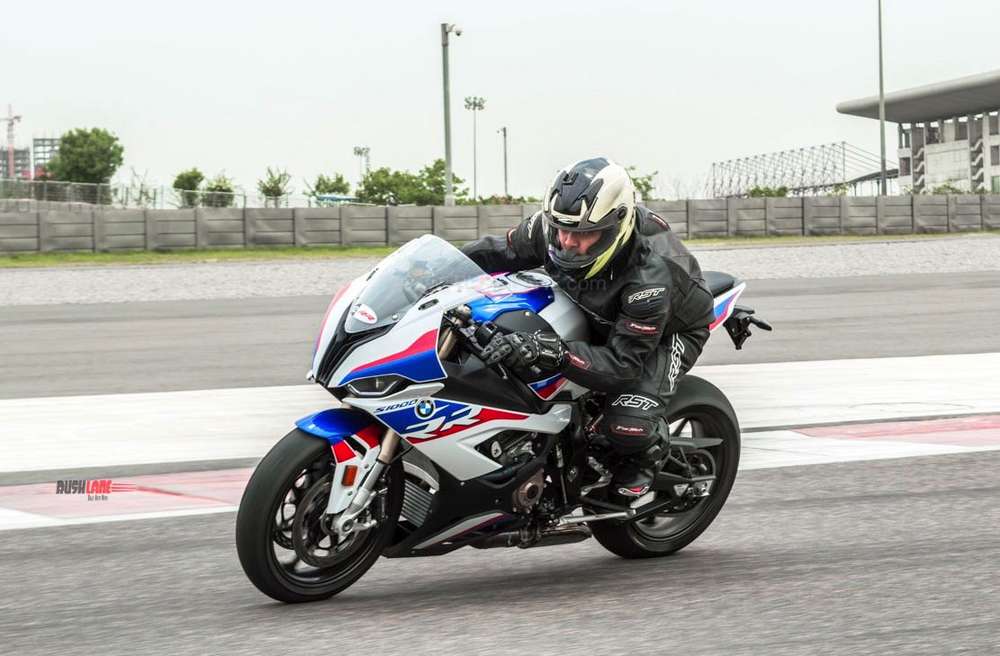 Ten years after BMW made an unexpected game-changing introduction of the BMW S1000RR, which trembled the grounds of all its competitors in one way or the other, the second-generation S1000RR has just arrived with the potential to high-side its competition once again. What’s to be noted here is that the new Double-R puts more fear in its contenders by removing the same from its riders. Yes, the 2019 BMW is surprisingly easier to ride, even for a newbie to the litre-class motorcycles, and it is very well apparent.

We find it hard to summarise all the changes that the 2019 S1000RR features, as all the changes are worth mentioning. BMW most definitely didn’t leave any stone unturned in the four years they took to develop the new RR. And, as a first in the Motorrad line-up, the ‘M’ designation that identifies the BMW performance cars is used on the 2019 S1000RR in place of the HP4 branding, for the top of the line package that includes some of the extra-special features and race-inspired livery. In this case it is a 3.5 kg weight reduction overall, using carbon-fibre wheels, a lithium ion battery that is 2 kg lighter, etc. and some exclusive bells and whistles.

The 2019 BMW S1000RR is a brand new motorcycle compared to its asymmetrical predecessor, down to the tiniest detail. Almost all of the critical components and systems have been meticulously improved, for lighter weight, or better component-level performance; in most cases, both. The part-level weight reduction is as marginal as 3 grams in some cases, but that seemingly insignificant weight optimisation on the right parts improve the outcome quite considerably as in the racing world it is milliseconds that shuffle names on the scoreboard. 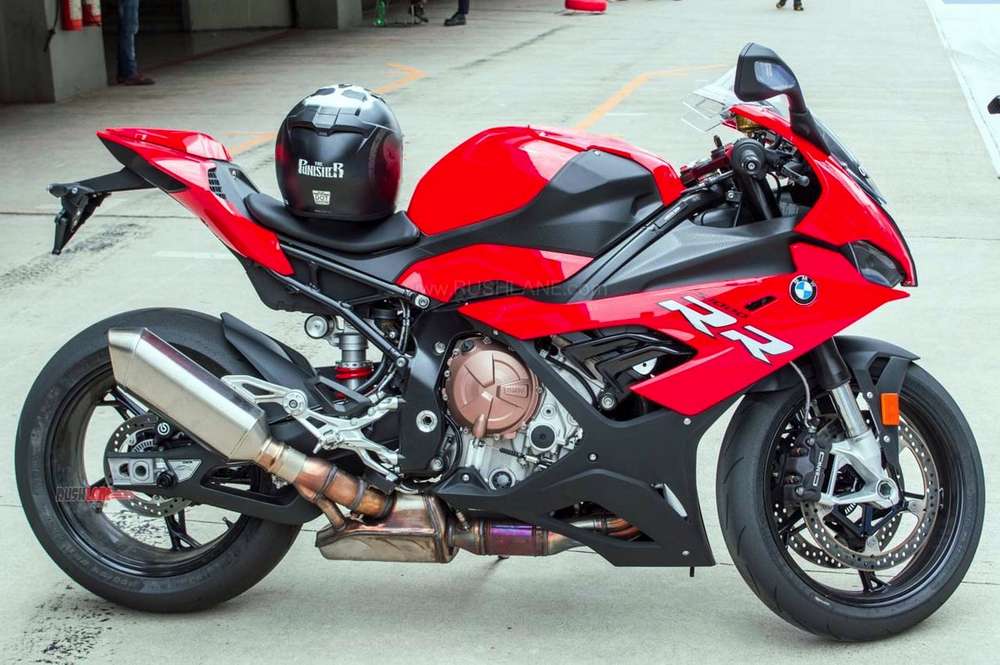 Let’s begin with the engine. It’s still has the same configuration, with in-line four cylinder construction displacing 999 cc with DOHC and 16 valves, but the parts that go in and the power that comes out are not quite the same. The cylinder head is redesigned, to say the least, and a new system called BMW Shiftcam has been installed for a revolutionary improvement in the power delivery. The rated maximum power of the 2019 BMW S1000RR is 207 bhp at 13,500rpm and the peak torque is 113 Nm at 11,000 rpm. That is an increase of 8 bhp at 500 rpm higher, on a motorcycle that’s lighter by 11 kg than the predecessor. There is an M-Package variant that has the same power specs but lighter overall by 14.5 kg compared to the asymmetrical RR. We will talk about all the component-level weight reduction done on the 2019 RR down the page.

The Shiftcam valvetrain enables variable valve timing and variable valve stroke for the intake, with the help of two cams per valve that slide to switch positions at 9,000 rpm cue. Essentially, the first cam does duty until 9,000 rpm in partial load with a reduced valve stroke, and the other takes its place by means of a solenoid actuator to take care of full load after 9,000 rpm with maximum valve stroke. This is responsible for better fuel efficiency and lower emissions in the lower rev-range.

In conjunction with lighter moving parts in the engine, Shiftcam has helped improve the torque curve for a better mid-range grunt while improving fuel economy by 4 percent. That is definitely huge for a litre-class race-ready bike. The peak rev-range is now farther at 14,600 rpm from 14,200 rpm in the first-gen S1000RR. The overall result is a less violent and more linear delivery of raw power, that doesn’t scare the rider yet doesn’t compromise on sheer throttling pleasure. 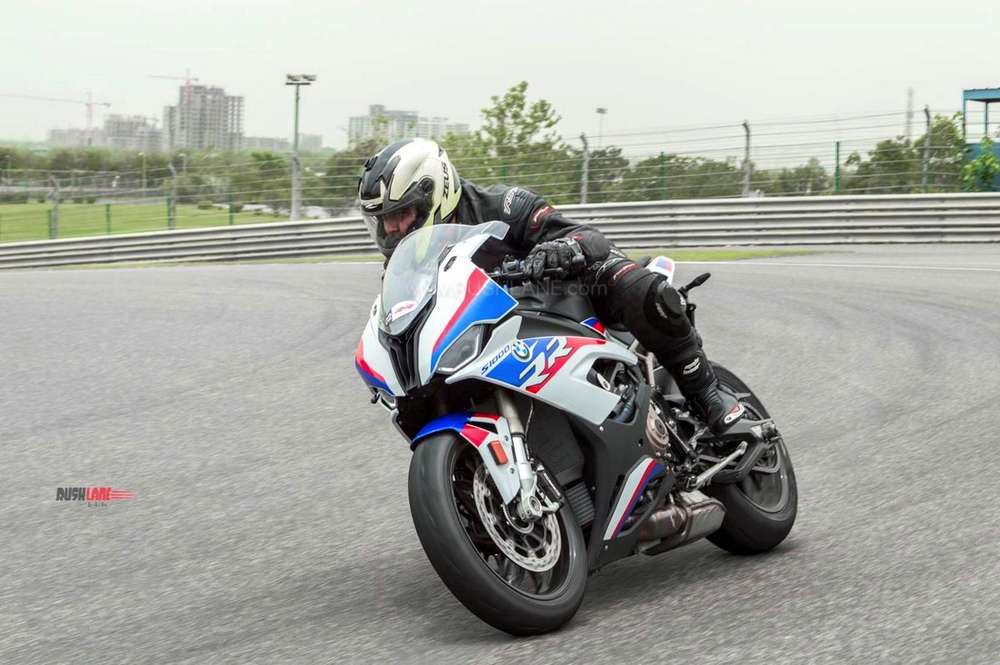 Speaking of throttling and pleasure, the first thing we know you’d like to know is that the wheelie control is now a function separated from the usually all-encompassing traction control system, which means you can set separate limits and adjustments for pulling wheelies and setting traction intervention. In practical terms, you can now configure a low-risk high-safety traction setting for leaning carefully around corners, while still being able to pull off an easy and tall wheelie while riding upright. You’ll never miss the traction control kicking in well before you think you need it, by the flashing LED at the meter console. More features like ABS, engine braking control, etc. can be individually controlled with ease using the toggle switch on the left handlebar.

The standard riding modes are Rain, Road, Dynamic and Race, but M-Package offers Pro modes with Race Pro 1, 2 and 3 for optimised combinations of the aforementioned functions and engine maps, for a more personalised riding experience. The on-demand customisation of functions such as wheelie control, engine brake control, ABS Pro, Dynamic Traction Control, throttle response and engine braking are a part of the three programmable modes of the Pro modes that come with the M-Package. This includes a launch control feature and a pit lane limiter as well.

If the list of riding features seem short on the 2019 S1000RR, you can add cruise control, hill-start control, hill descent control, and quick shifter (up and down) as well. The HP Shift Assistant Pro is now a standard feature across all variants. The 6.5-inch TFT makes it very intuitive to access, understand and play around with these systems. There are different themes to display the standard readings in different styles on the screen while riding, which is a well engaging offering. 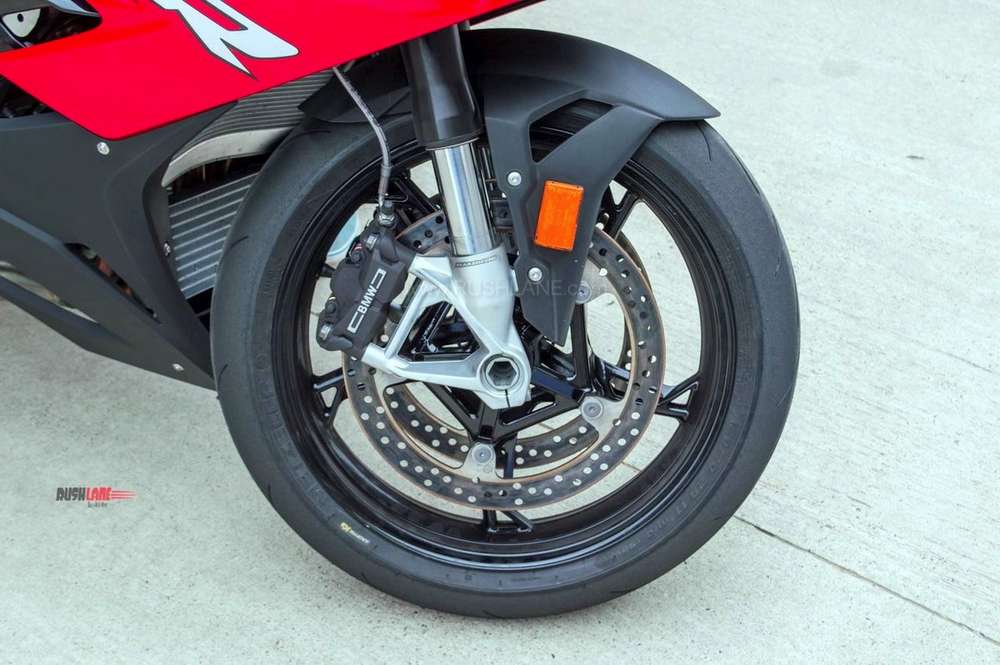 For all the above to work, BMW Motorrad had to revisit its course of relationships with its technology partners and component suppliers, despite having a veritable history with each of them. If that wasn’t surprising enough, they didn’t sever ties with them for good for the development of this motorcycle, they made rivalling partners/suppliers to work on different modules instead to ensure the best outcome for the new S1000RR.

To cite the most significant, the radially-mounted four-piston front calipers are procured from Hayes (US) instead of its go-to-guy, Brembo from Italy, the radial master cylinder comes from Nissin (Japan), the brake discs still come from Brembo, the suspension is now from Marzocchi instead of Sachs, the ABS program and HECU are developed by Continental this time instead of Bosch, but the six-axis IMU was developed by the latter, and the list goes on.

These profound changes were made by BMW solely for the fact that they were not willing to procure and assemble readily developed sub-systems with just minor tweaking to suit the bike, but develop each one of those systems meticulously, probably from the ground up, to bring their vision of the 2019 BMW S1000RR to life exactly the way they envisioned it. We heard that the Continental ABS modulator was chosen because they were able to develop a smaller and lighter version than their counterpart could manage, which is something that a motorcycle like the Double R can’t afford to overlook. 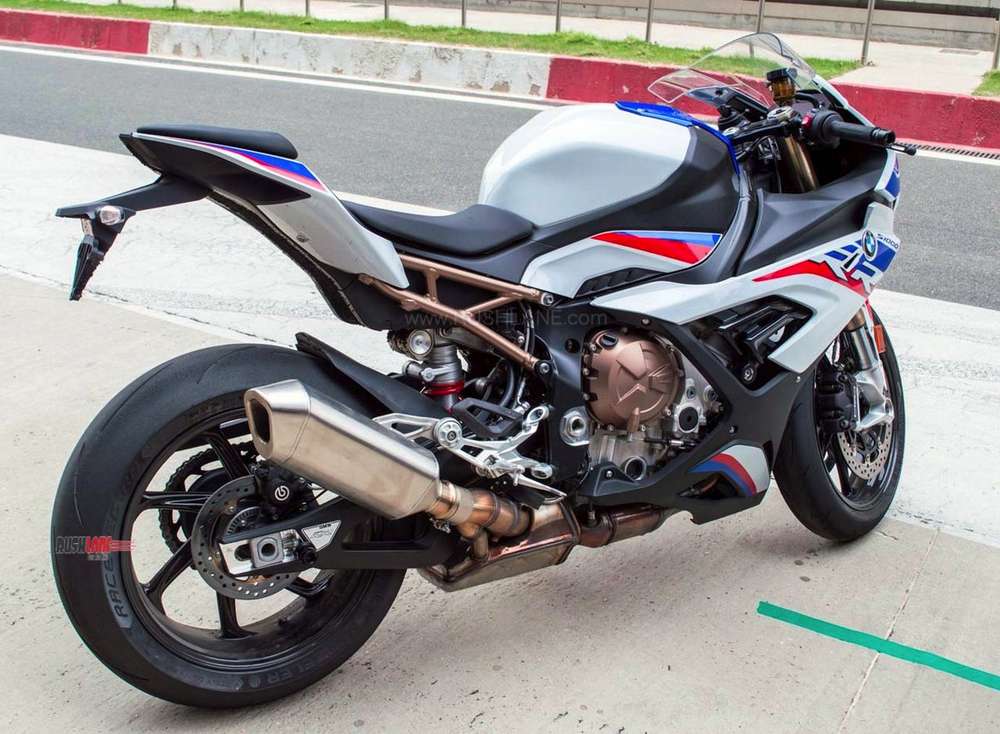 The braking is now made phenomenally friendly for new riders, as the initial bite that is known to be profound on the S-Thou is now a thing of the past. The braking is significantly linear now, allowing room for better learning on how lightly you’re supposed to panic on the levers. But this hasn’t impacted the confidence of slowing down, as the braking progression is still very reassuring. As a result, the bike should now be easier to control on a wet track. Despite all the intricate tweaking you’re welcome to do via the new TFT display, braking adjustment isn’t one of them.

Complementing the new stopping behaviour, is the new suspension and its all-new behaviour program under the BMW DDC (Dynamic Damping Control) module. The USD front forks from Marzocchi are 45 mm units while the old S1000RR has 46 mm legs. The rear shock absorber is now mounted vertically on the new underslung swingarm, and gives a floating effect as it is not bolted to the main frame, but to an adapter. The shock electronics have been improved quite substantially, the suspension damping is adjusted real-time sensing the surface conditions, and now it allows third-party specialists to tweak them directly. In addition, as opposed to the earlier RR, the internal shims in the shocks of the new Double R can now be customised for better personalisation of the overall suspension system, despite the doors being opened to take control of the electronic adjustments. The M-Package adds another customisation to the handling front, by way of pivot point adjustment on the 606.6 mm swingarm.

The 2019 BMW S1000RR is very effortless to handle, and flick in and out of tight corners. This is in considerable part thanks to the brilliant new chassis geometry and riding position. The position of handlebars is made taller compared to the old model, and the bike now has sleeker shaped fuel tank. This enables the rider to feel better gripped and more integrated to the bike; the arms, thighs and legs can be tucked in further than one could on the older RR. 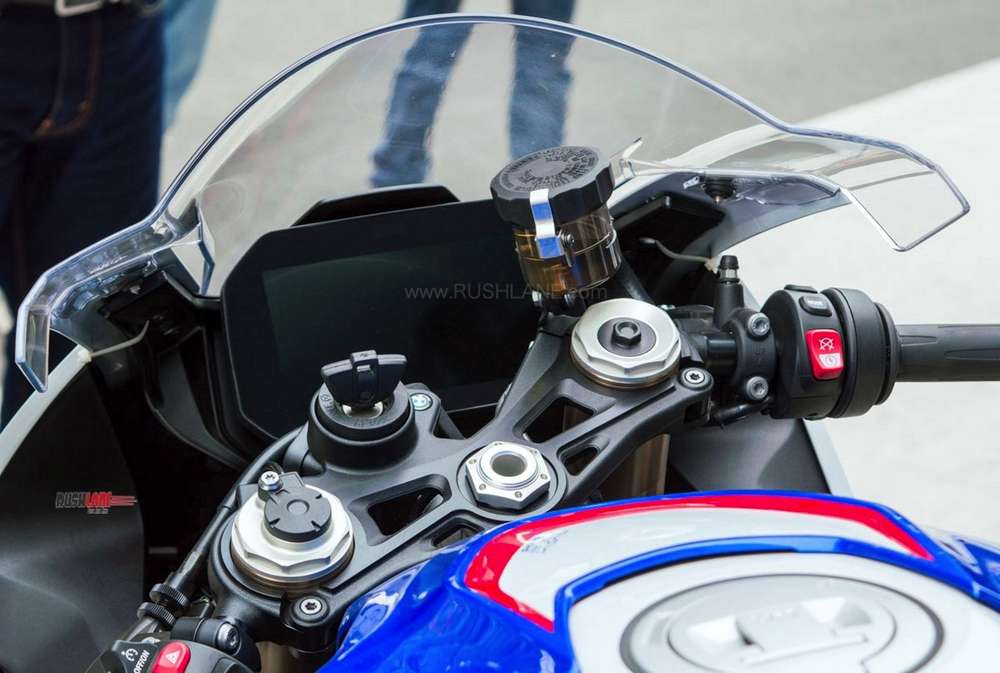 What used to be clip-on bars are now mere extensions of the triple clamp, as they are combined as an integrated unit. This means no adjustability, and replacement in case of damage would be expensive and time consuming. So any personalisation on that front would have to be a more extensive job.

The castor trail has been shortened to 93.9 mm from 96.5 mm, and the steering rake angle has been made steeper by 0.4 degrees at 23.1 degree for a sharper response, but the wheelbase has been extended by 9 mm to 1,441 mm.

The chassis is completely reengineered and BMW calls it Flex Frame. It has some underpinnings of the old frame, but the profile of the individual aluminium structural members is more along the lines of C-section seen in monocoque chassis than the traditional hollow pipe extrusion used extensively in motorcycles. This calls for some serious engineering attention to get it right, but the rewards are lighter weight and better packaging. Overall, Motorrad was able to make the frame narrower and lighter by 1.3 kg, and they have now used the engine as a load bearing member. 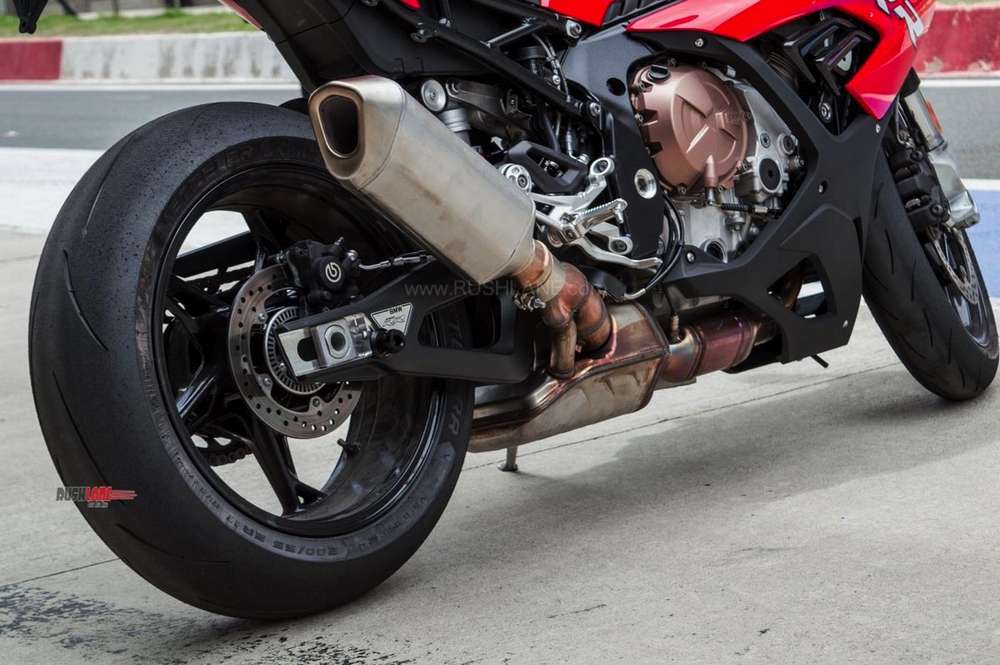 Going through the weight reduction log of the 2019 BMW S1000RR, we find it interesting that a lot of optimisation have been successfully carried out within the engine, like the hollow-bore titanium intake valves which are now 10% lighter, the new DLC-coated finger tappets that measure just 8 grams, and the redesigned rocker arms which are 20% lighter (though it weighs just 8 grams per unit as opposed to 11 grams earlier), the crankshaft is a whopping 1.7 kg lighter, all of which contribute significantly to the improved performance of the engine. The engineers have also saved some space, weight and plumbing inside the crankcase, by packaging the oil and water pump together. There are many such critical changes carried out in the engine that takes optimisation to a whole new level. The gross result is 197 kg for the standard variant and 193.5 kg for the M-Package variant, while the standard version of the old bike tips the scale at 208 kg.

The unsprung mass is also significantly lower, with the cast aluminium wheels now measuring 1.5 kg lower than the older ones (individually), and the brake discs have shed about 500 grams. If this ain’t enough, the M-Package offers lighter, carbon fibre wheels.