At the moment, German automaker Audi has got a limited lineup in our market. The Audi India portfolio consisted of only the A6 mid-size sedan, A8 full-size sedan and Q8 mid-size luxury crossover but now, the company has launched the performance-focused Audi RS7 Sportback at an ex-showroom price of Rs 1.94 crore.

Bookings for the performance coupe-ish sedan were opened last month for a downpayment of Rs 10 lakh. As the name suggests, it is based on the current-gen Audi A7 (which may not come to India) and primarily rivals the Mercedes-AMG E63 and BMW M5 — both of which have received significant improvements recently.

The new Audi RS7 Sportback, regarded as a ‘five-seater couple-like grand tourer’, is sold as CBU product. Nationwide deliveries will begin in August 2020 or after a slight delay if the dealership location comes under COVID-19 lockdown protocols.

Compared to its regular A7 sibling, the RS7 sits lower and wider. Custometic features such as the front grille, advanced full-LED lighting setup and bar taillamp configuration remain identical. Exclusive to the ‘RS’ model is a prominent rear diffuser, active spoiler, revised twin oval-shaped exhausts, 21- or 22-inch wheels and various other customisation or performance upgrades. 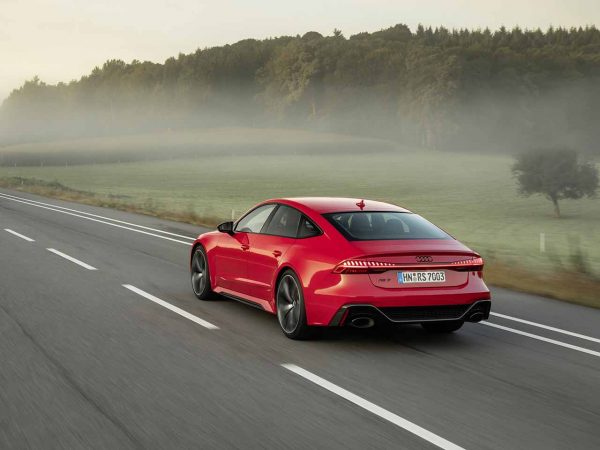 The output is sent to all four wheels via Audi’s proven Quattro all-wheel-drive system. Put together, the performance sedan can accelerate from zero to 100km/h in just 3.6 seconds. Top speed is electronically limited to 250km/h. This can be dialled up to 305km/h by opting the ‘RS Dynamic Plus’ package.

Despite being an all-out road-legal performance machine that can seat five, the 2020MY Audi RS7 features Cylinder on Demand (COD). The system essentially cuts power from up to four cylinders during light-footed high-gear driving in order to return maximum fuel economy. Cylinder deactivation is becoming common in regular cars as well. For instance, the Indian-spec Skoda Karoq 1.5 TSI petrol can run on ‘two cylinders’ in certain conditions.