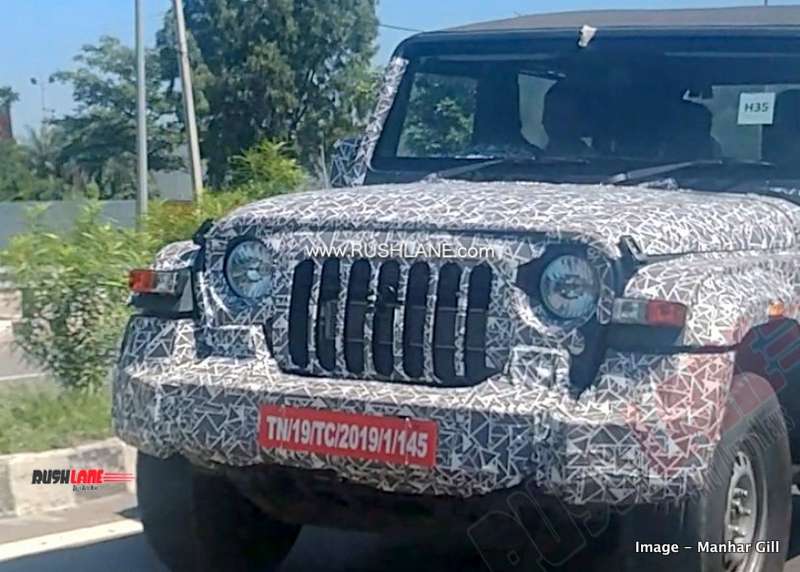 Mahindra seems to be aggressively testing its 2020 Thar as only that can explain the repeated spotting of its camouflaged test mules. The upcoming Thar is expected to be launched sometime around Q1 2020 and looking at the cars on test, it seems like that they are getting close to the production-ready stage.

Now, recent spyshots have been shared by automotive enthusiast Manhar Gill. The new gen Thar in video, is seen wearing production ready body panels. The car on test was a BS-VI compliant model and had a relatively silent engine, possibly Mahindra’s new 2 litre diesel motor. Interiors too seem to have been redone, as there was a new steering wheel and a new dashboard layout which included space for a touchscreen infotainment unit.

As far as dimensions are concerned, the new Thar clearly looks wider than the version which is currently on sale. Though it hasn’t been confirmed officially, but it is likely that the 2020 Thar will have more ground clearance on offer as well, further enhancing the off-roading capabilities of the SUV.

The Thar has been on sale in India since 2010, which kind of filled the gap left by the MM540. However unlike its predecessor, which was more focused as a people commuter in rural-semi urban areas, the Thar evolved into country’s off-roading champion and has managed to develop its own cult following. Later in 2015, Mahindra had also introduced a facelift of the Thar which provided better creature comfort features and some mechanical enhancements.

Talking about the technical aspects, the 2020 Thar will share its platform with the next generation Scorpio (which too has been on test). Engine too will be shared with the Scorpio and 2020 XUV500. The car will be able to meet the upcoming BS-VI emission norms and the upcoming safety norms, right from its launch. The SUV will continue to have rear-wheel drive with an option to switch to 4X4 (along with low and high ratios).

Looking at the updates and the current speculation, we expect the Thar to debut in Q1 2020, or maybe a little earlier. Mahindra might also use the opportunity at the 2020 Auto Expo to either debut or launch the next-generation Thar. Prices of the top-end trim shall be around the INR 11-12 lakhs (ex-showroom) mark. There will be limited direct competition for the Thar, majorly coming in from the Force Gurkha.