Renault Duster Turbo with best-in-class power is here, and we take a spin to find out if the new engine gives the old car a shot in the arm

To keep itself refreshed in the segment and also to conform with the latest BS6 regulations, the Duster gets a new dose of life – a 1.3L Turbo Petrol. Our test car was equipped with a CVT but a 6 speed Manual Transmission is also on offer. 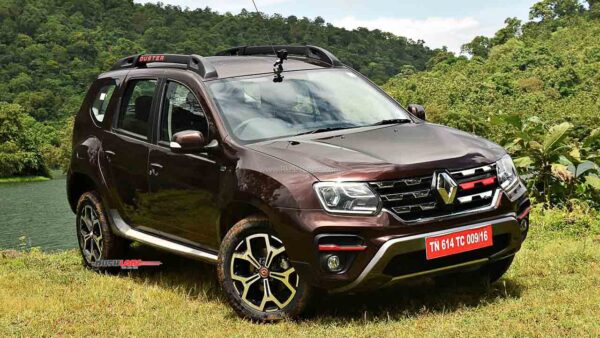 Post its face-lift in 2019, it seems that mere addition of a new motor hasn’t warranted much updates on the exterior of the Duster. With a completely upgraded model in the works likely to be launched in 2021, retaining the looks not only makes logical but also economical sense.

To set it apart from its siblings running the naturally aspirated gasoline motor, the Turbo variant has a generous adornment of red highlights all around, a la Kia Seltos GT line. Starting with the Tri-winged chrome grille with Crimson accent, the treatment also is applied to the fog lamp housing. 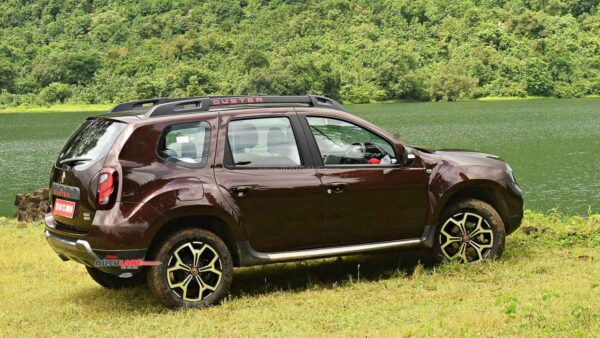 Smart looking Forza Diamond cut alloy wheels are the latest addition while the chunky roof rails get Duster badging in Red font too. Rear tailgate gets a small Turbo monogram as a give away the crossover’s forced induction credentials.

Internally, updated Deco Brown upholstery with blue stitching brings in hints of refreshment to an otherwise simple yet built to-last cabin. Climate control, driver side seat height adjustment, Android Auto/Apple Car Play compatible 17.6 cm MediaNav infotainment, steering mounted controls are all there, but they are not enough to conceal the ageing design, fit and finish compared to the levels that the competition has spoiled us with. Anyone who has sat in a Duster before, will feel at home since there aren’t much new additions. 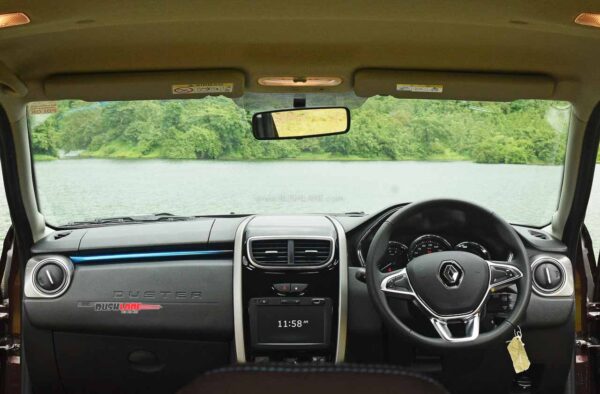 Coming to the most comprehensive element of the upgrade- the all-new 1.3L Turbocharged engine with gasoline direct injection. If 156 bhp doesn’t sound exciting enough, it’s the diesel engine-like torque figures (254 Nm at 1600 rpm) that will not fail to impress anyone. To put things into perspective, the older K9 1.5L oil burner produced 148 Nm at 2250 rpm. 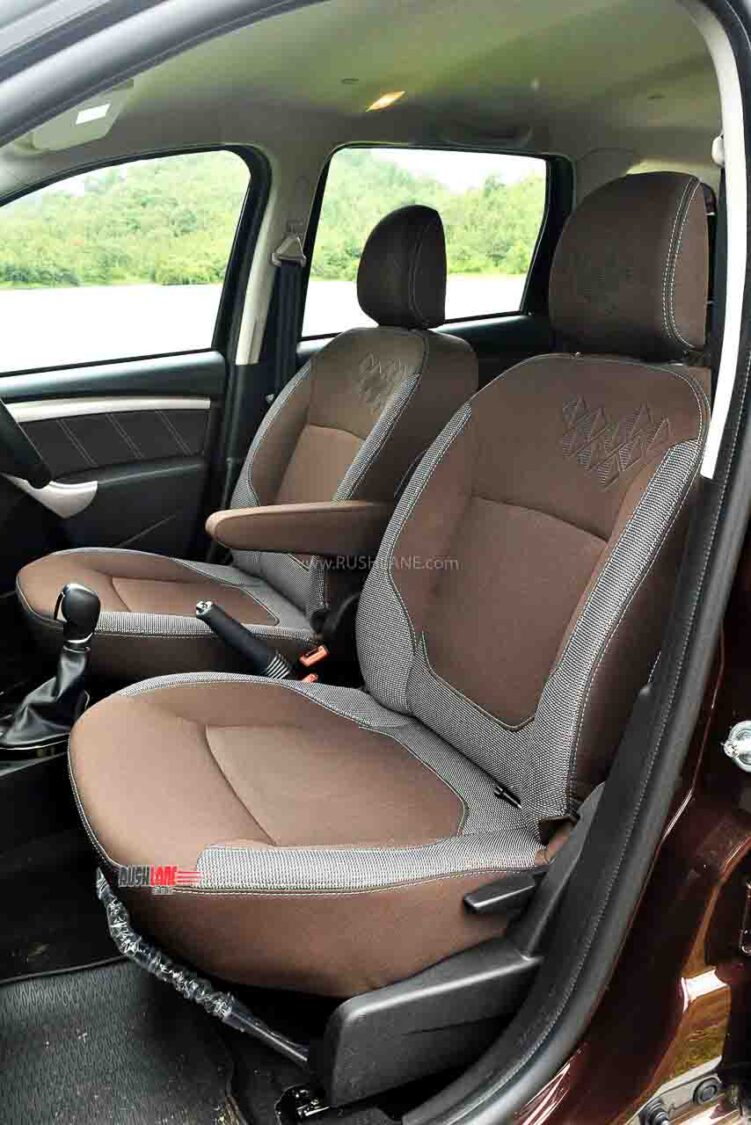 Developed in collaboration with Daimler, this unit also powers some of the Mercedes-Benz cars like GLA, CLA and A – Class in the international markets. The Duster might be behind its rivals when it comes to equipment levels but with this power unit it is the most powerful vehicle in its class, period.

We drove the 7-speed X Tronic CVT variant and were mighty impressed with the overall package and drivability too. While the rubber band effect of variable transmissions is staple and earned it a bad name, we are happy to report that is not the case with its pairing here. 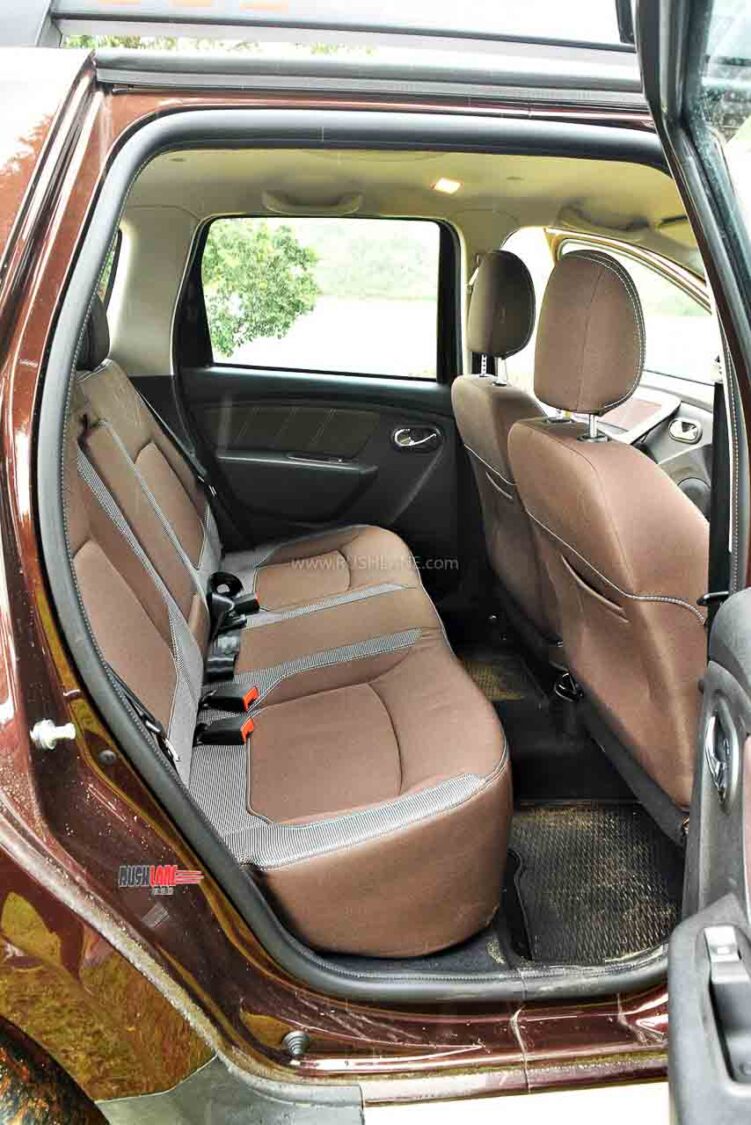 Gear ratio transitions work like a charm with this power unit that is further aided by the peaky torque at lower rpm range. 0-100 kmph was dispatched in under 11 seconds, which is pretty good, by CVT standards, but it’s the seamless ratio selection and flexibility of the power train that shines.

While a purist petrol head will drift towards a manual transmission, this option will definitely make him/her recognize the automatic one more. Our test car returned us 12.7 kmpl over a mix of highway and city driving. The Renault Duster Turbo 1.3L continues to be equipped with a 50 liter fuel tank. 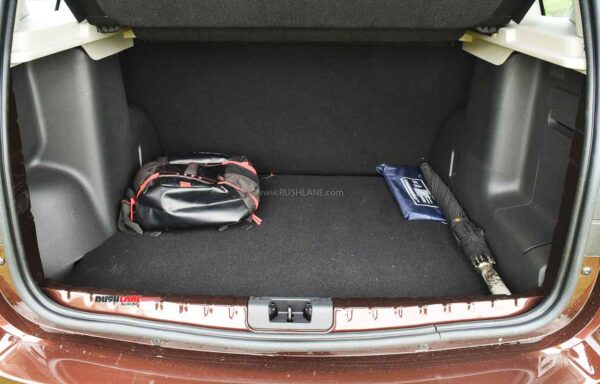 When it comes to ride quality and drive experience, with the Duster it’s a mix bag actually. Even after being around for 8 years, the ride quality over bad roads still trumps the segment. Highway manners are still good but it rolls considerably around corner. The competition has moved up a few a notches in these regards. While the high driving position with a commanding view is a plus, the heavy steering is a thumbs down especially in city traffic and while executing 3 point turns.

Verdict: Does it still make sense to buy one?

The answer is a Yes and No at the same time. RXE 1.3L Turbo starts at INR 10.49 lakh with a Manual transmission while the RXZ 1.3L Turbo tops the charts at INR 13.59 lakh (prices are ex-showroom). Renault has updated the equipment list and as long as one is not super finicky, the Renault Duster Turbo provides a maximum bang for the buck. 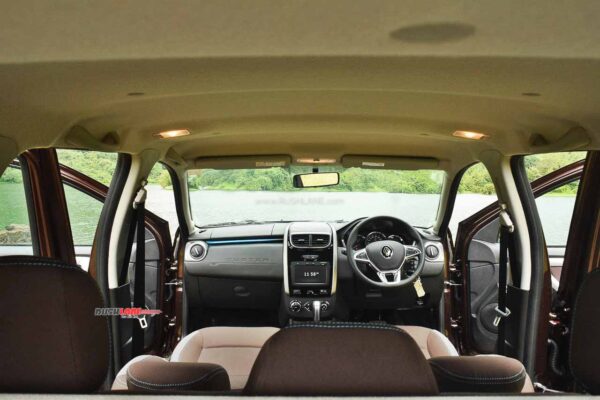 It remains the most economical Turbo engine powered vehicle in its class with a fairly functional package despite the ageing looks. With vehicle dynamics that still lead the segment, it still has plenty going for it before calling it a day. Unfortunately, Renault has pulled the plug on the AWD variant.