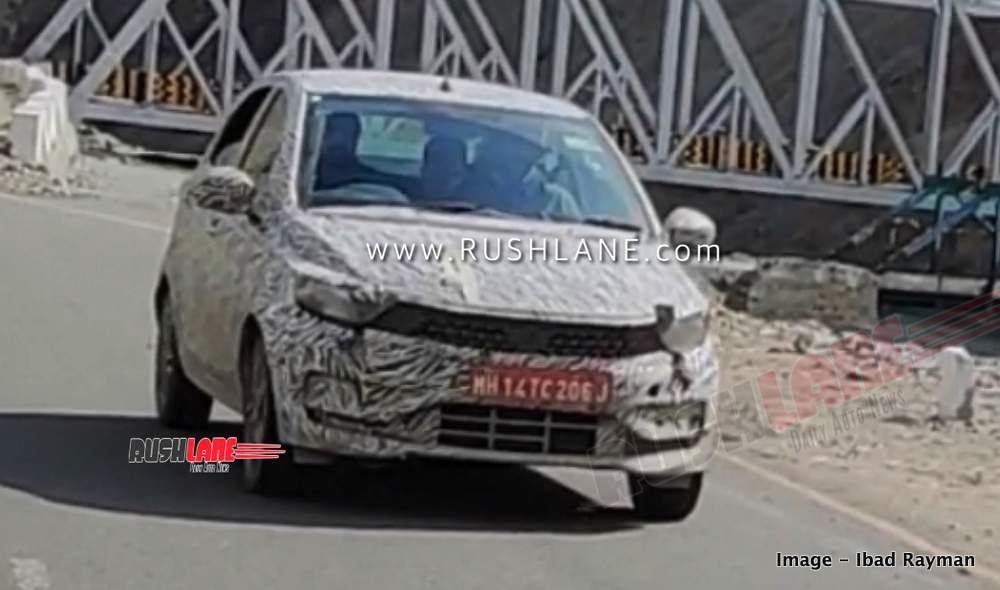 Tata Tiago, launched in 2016 is set to get a facelift with new features and updated engine lineup. A production spec version of the Tata Tiago facelift was recently spied testing in Ladakh by automotive enthusiast Ibad Rayman.

The latest spy shots reveal the front of the new Tata Tiago, which confirms that the front design is now inspired by the soon to be launched Altroz. Set for launch sometime in early 2020, the Tiago facelift receives exterior and interior modifications, and this time round, will be exclusively powered by a petrol engine.

Tata Tiago, which currently sports a honeycomb grille design, will now get a grille with horizontal slates on the facelift model along with sharp looking headlamps. It will also be seen with a revised front profile, new fog lamp housing and new tail lamp. While LED DRLs are also expected as a part of its updates, the top spec model could also get projector headlamps.

The interiors of Tiago facelift also get some changes in terms of colour scheme in a grey and black combination and revised upholstery. It also sports a new digital instrument cluster like that seen on the Kwid and Maruti S-Presso, a touchscreen infotainment system with Apple CarPlay and Android Auto and an 8 speaker Harman sound system. Where safety is concerned, the Tiago facelift will sport steering mounted controls, climate control, twin airbags, ABS, EBD and engine immobilizer.

Though the engine options currently comprise of both petrol and diesel engines, the Tiago facelift will be exclusively powered by a petrol lineup. The diesel unit will be done away with altogether following the company’s announcement to not sell small diesel cars once BS VI emission norms come into effect. The 1.2 liter, 3 cylinder petrol engine will offer 85 PS power and 114 Nm torque mated to a 5 speed gearbox.

As is seen in the case of the current Tata Tiago, the Tiago facelift will also continue to rival the Hyundai Santro, Maruti WagonR and Maruti Celerio. These feature updates will also prompt a marginal increase in prices as compared to current prices; that start off at Rs.4.40 lakhs. With the launch of 2020 Tata Tiago facelift, Tata Motors will aim to bring a boost in their declining car sales.