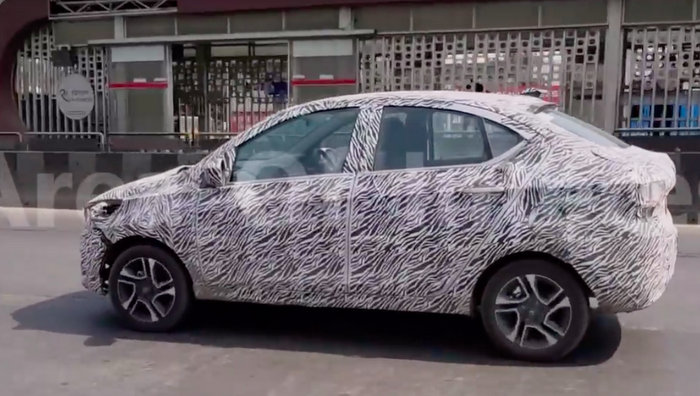 Just a few weeks after the first spotting of Tata Tiago facelift prototype, its sedan sibling, the Tigor has emerged on public roads with camouflage. Tata Tigor facelift is likely to be introduced alongside the updated hatchback at the 2020 Auto Expo.

Tata Tigor facelift’s visual changes will be largely concentrated on the front fascia. The Impact Design 2.0 philosophy will be implemented and this means the lights (headlamps and foglamps), grille and bumper would be restyled with inspiration from the Altroz premium hatchback.

Tigor’s notchback profile would stay unchanged. The prototype suggests that there will hardly be any changes to the sheet metal design. Rear end design is expected to continue untouched save for a minor revision of the bumper and taillight cluster. Interior design is one of the talking points of the Tiago/Tigor twins and so, we don’t expect Tata Motors to fiddle too much with the layout. However, one can expect addition of more features and telematics, and new colour themes and materials for the upholstery.

The most significant change would be under the hood. As India is preparing to upgrade to BS-VI emission norms next year, Tigor’s powertrain will receive significant update. Tata Motors is most likely to discontinue the 1.05-litre diesel engine moving forward as the cost-benefit balance is not in its favour.

Upgrading the oil burner would make it unreasonably expensive and as it is, the lion’s share of sales comes from the petrol variants anyway (just like in the case of Tiago). Tata Motors may chose to substitute the diesel engine with a petrol hybrid or pure electric powertrain.

The 1.2-litre Revotron petrol engine would be retained. In its current state of tune, the power plant produces 85 hp and 114 Nm of torque. A standard 5-speed manual and an optional 5-AMT would be on offer. Tata Tigor has been witnessing slow down in sales in the last couple of months and an upgrade would offer a much needed shot in the arm. Owing to BS-VI upgrade, expect the Tata Tigor facelift to be have noticeable spike in its price tag. Currently, the petrol variants of the compact sedan retail between INR 5.48 to 6.91 lakhs (ex-showroom, New Delhi).