All new 2020 Volkswagen Polo Plus has made its global debut today at the Shanghai Auto Show. It is based on the new generation Polo, which is on sale in Europe. The new gen Polo is a bigger hatch, as compared to India-spec Polo. It is longer than the likes of Maruti Baleno and Hyundai i20 in India.

New Polo Plus is exclusively for the Chinese market as of now. It stands 4053 mm long, 1740 mm wide and 1449 mm tall. It has a wheelbase of 2564 mm and it sits on 16 inch alloys. In comparison to Europe spec Polo, it has the same dimensions, except for the width and height. Chinese Polo Plus is narrower by 11 mm and shorter by 3 mm.

Polo Plus is a chopped down variant of fully loaded variant of Polo on sale in Europe. It misses out on larger 17 inch alloys, LED headlamps, etc. It does get features like diamond cut 16 inch alloys, sunroof, touchscreen infotainment system with rear camera, leather seats, steering mounted controls, fake dual exhaust, etc. 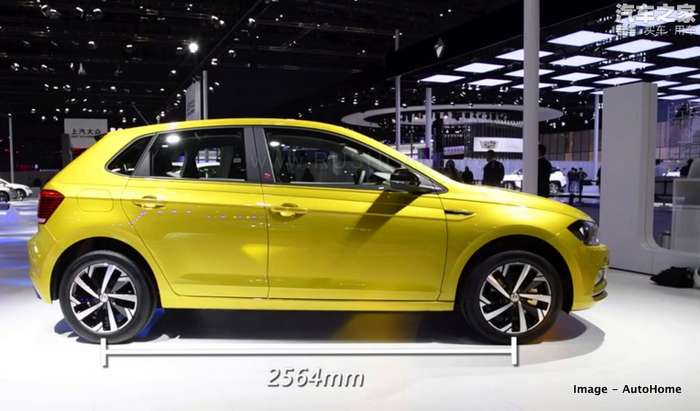 Fully loaded Polo comes with fully digital instrument cluster, like we have seen in new Audi cars. But the Polo Plus gets a cluster similar to current Polo with MID in between two analogue circular dials. There is no automatic climate control, instead it gets manual AC. It also misses out on Apple CarPlay. Though there is the premium Beats audio system with 4 speakers and tweeters.

Speaking about India, Volkswagen is getting ready to update the Polo, which is also their best selling car here. Ahead of new emission norms that come into effect from April 2020, Volkswagen has started testing its new EA211 series, BS-VI compliant, 1.0-litre TSI engine. Volkswagen cars that will be using the new engine have been spotted testing at various locations in India. In the present setup, Volkswagen utilizes an EA111 series 1.6-litre MPI engine that is manufactured in India. A 1.2-litre TSI engine is also used in cars such as Polo GT TSI and Vento TSI. New BS-VI compliant EA211 series engine will work as a replacement for both phased-out engines.

Volkswagen has big plans for India and it had announced in 2018 that its new 1.0-litre TSI engine will be assembled locally. This move is part of India 2.0 strategy that Volkswagen has defined for the country. Volkswagen new BS-VI compliant engine is a 3-cylinder unit that comes in two power configurations, 94 hp and 115 hp. Made from die-cast aluminium and hollow-drilled components, the new engine is compact, lightweight and generates less friction. These features translate into optimal space utilization, improved fuel efficiency and better cooling.