BS6 petrol Volvo XC40 MY2020 has been launched in India at a starting price of Rs 39,9 lakhs, ex-sh. We recently got a chance to test drive the car in Goa. Here is our test drive report.

The Volvo XC40 made an entry mid-2018 to disrupt the entry-level luxury-SUV segment that’s filled with awfully familiar cars. It arrived in India with a diesel-exclusive R-Design variant with a very attractive price tag of INR 39.90 lakhs (ex-showroom). In less than 18 months, the company has launched the 2020 Volvo XC40 in India in the same R-Design variant (alone), carrying the same price tag, but with a host of updates and changes, not the least of which is the swap of the highly impressive D4 2.0-litre diesel motor for the new T4 BS6 petrol engine. Is this swap going to be an oomph or ouch for the buyers?

The 2020 Volvo XC40 still looks just the same as the 2018 model that looked almost identical to the Volvo 40.1 concept car underpinned by the brand’s Compact Modular Architecture platform. And just as before, the new Volvo is the largest in its segment in overall dimensions and ground clearance, not to mention the most muscular and distinctive in our opinion. 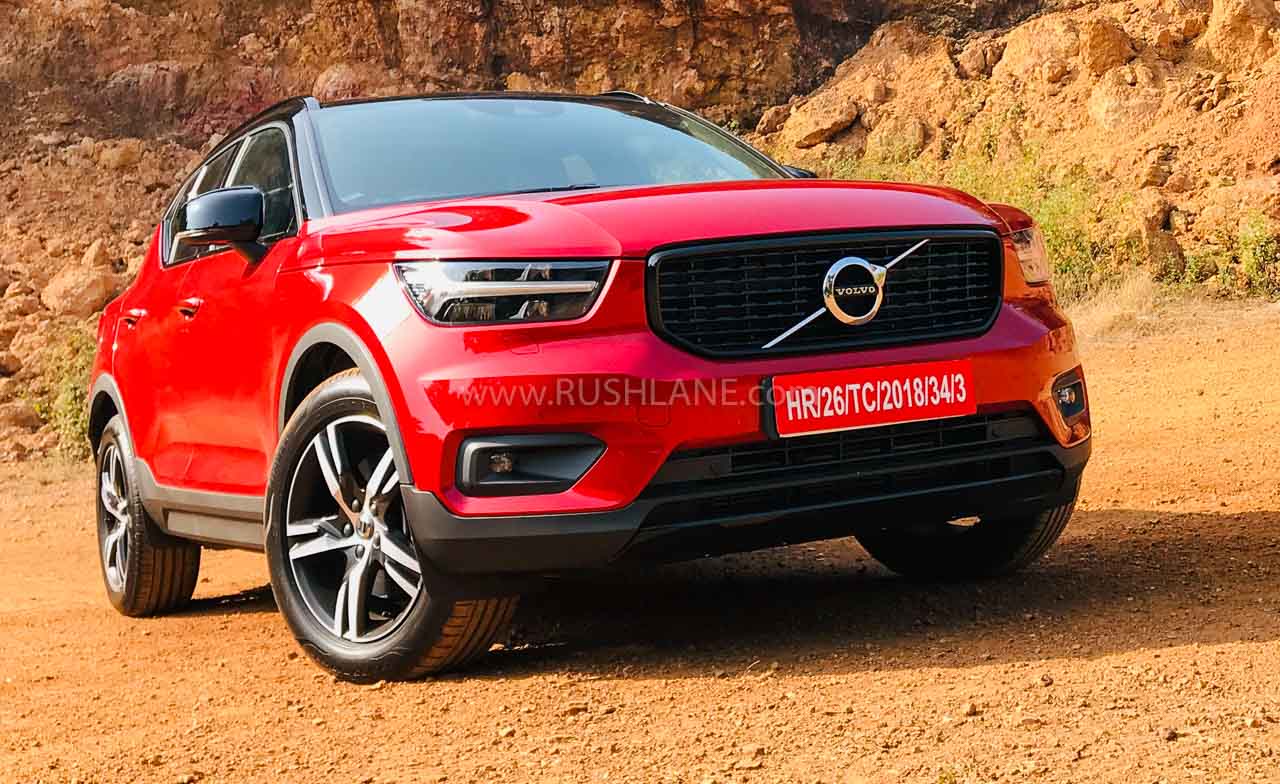 There is nothing new to talk about the exterior of the 2020 XC40, as even the 18-inch alloy wheels are carried over from the earlier model. Despite having no improvement to the outer skin, the smallest of the Swedish brand’s SUVs still feels strongly desirable especially compared to the competitors in its space which have been around us with more or less the same looks for many years.

The interior of the 2020 XC40 is where you can recognise most changes, even if not too many. The new instalment now only gets all-black colour theme that includes the Nappa Leather seats instead of the Alcantara ones, and black carpet all over the floor. So no more striking orange cabin that helps you stay awake, and there’s no more ventilated or heated seats either. 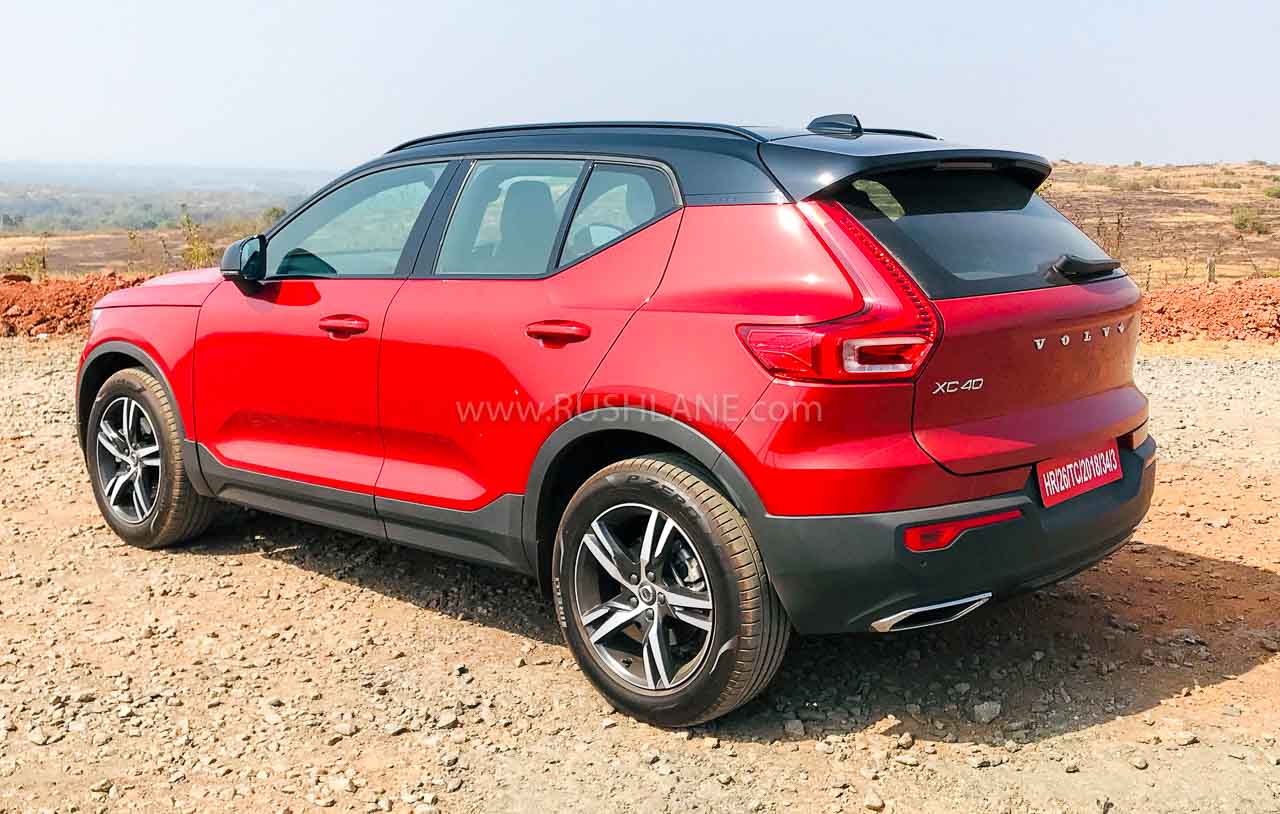 The darkness of the new black-insistent driving room is well compensated for the ray of life with the massive panoramic sunroof that’s too irresistible not to peek out of every now and then. Combine that pleasure with the beats, bass and jazz from the 600W 14-speaker Harman-Kardon music system that features a sub-woofer behind the dashboard, you’ll forget entirely that it was just a test drive and you don’t really own it yet. Don’t even get me started on the super immersive 9-inch vertical touch screen, and the highly engaging 12.3-inch instrument display, although they are the same hardware from the 2018 XC40.

Majority of what’s in the cabin of the new Volvo XC40 is still a carryover, the luxury factor of any of which is still surprisingly intact. We are talking about the touch and tactility of the controls, knobs and vents, the sinfully premium materials elsewhere in the car, and the host of intuitive storage options around the driver and even the passengers. The fun of dwelling inside the XC40 is augmented by the introduction of wireless charging pad in the recess of the centre console, thanks to which there is no distraction of a wire disturbing the experiencing of the car in peace. The no-wire bliss is not just about charging thankfully, it’s also about connectivity courtesy of Android Auto as well as Apple CarPlay. 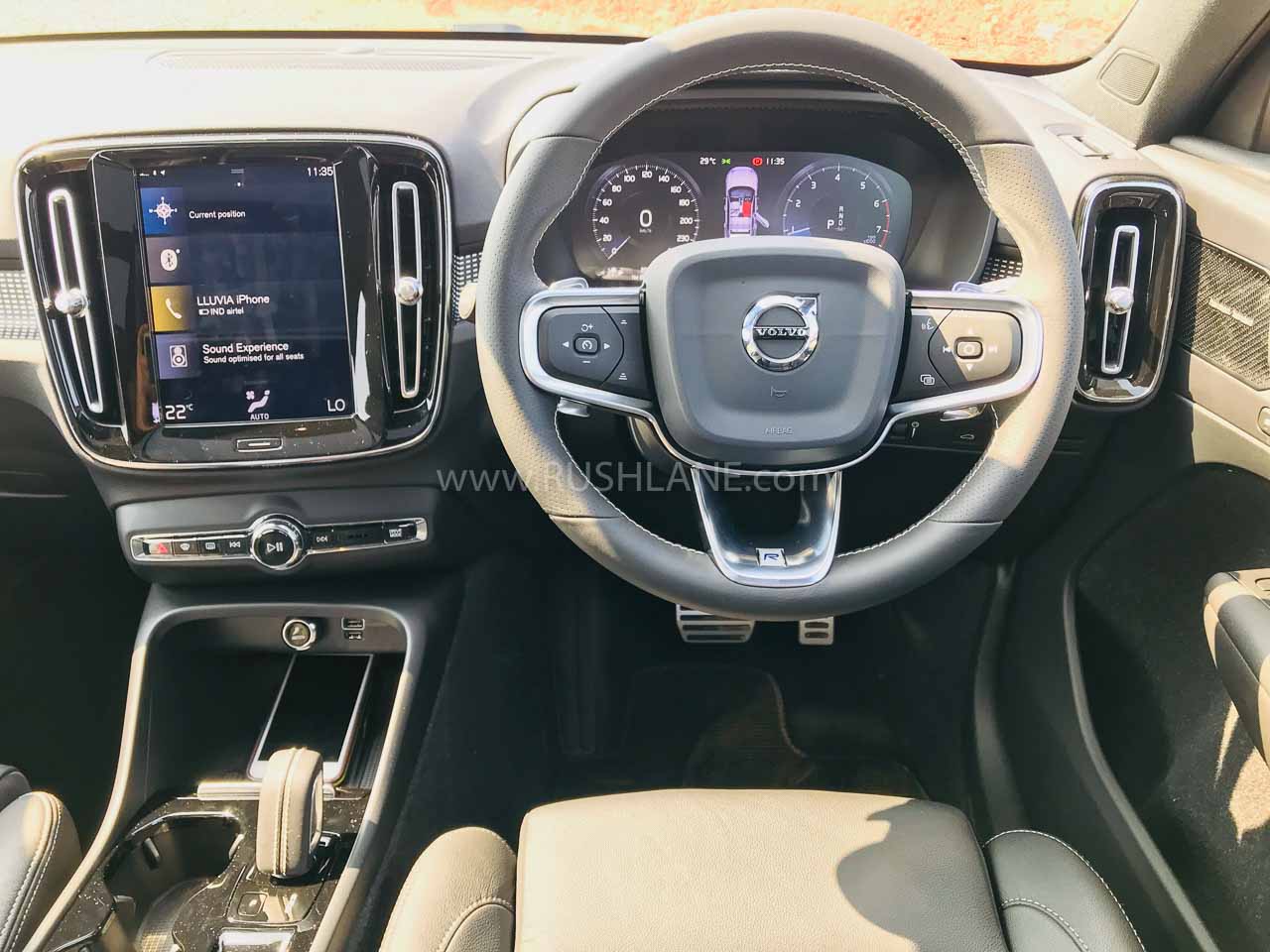 The passengers at the back can have a very relaxing ride as long as there aren’t three bulky adults. The corner seats are designed to be accommodative of sizeable men, but the centre space does not have ‘welcome giant’ written on it. For argument sake, it’s not like the rivals of XC40 are significantly otherwise.

The aforementioned host of storage options on the XC40 include expansive front door pockets that can hold a 1-litre bottle, an iPad, a note book and a text book, and still say ‘that’s all you’ve got?’ The centre tunnel has a large and deep sub arm-rest storage space, a waste bin, a four-pot cup holder, and the recess with the wireless charging flanked by extra space to shove more phones or small gadgets. The driver gets a special under-seat tray as well. ‘Spoilt with space to store crap’ would be an understatement in this car. The rear seat gets a wide arm-rest with cup holders, and seat corner shelves to store more crap apart from the rear door pockets and the long and wide rear parcel tray. The glove compartment for the front passenger hosts some clever provisions for the usual things we throw in. And yet we haven’t gotten to the best part of the storage options of this car. 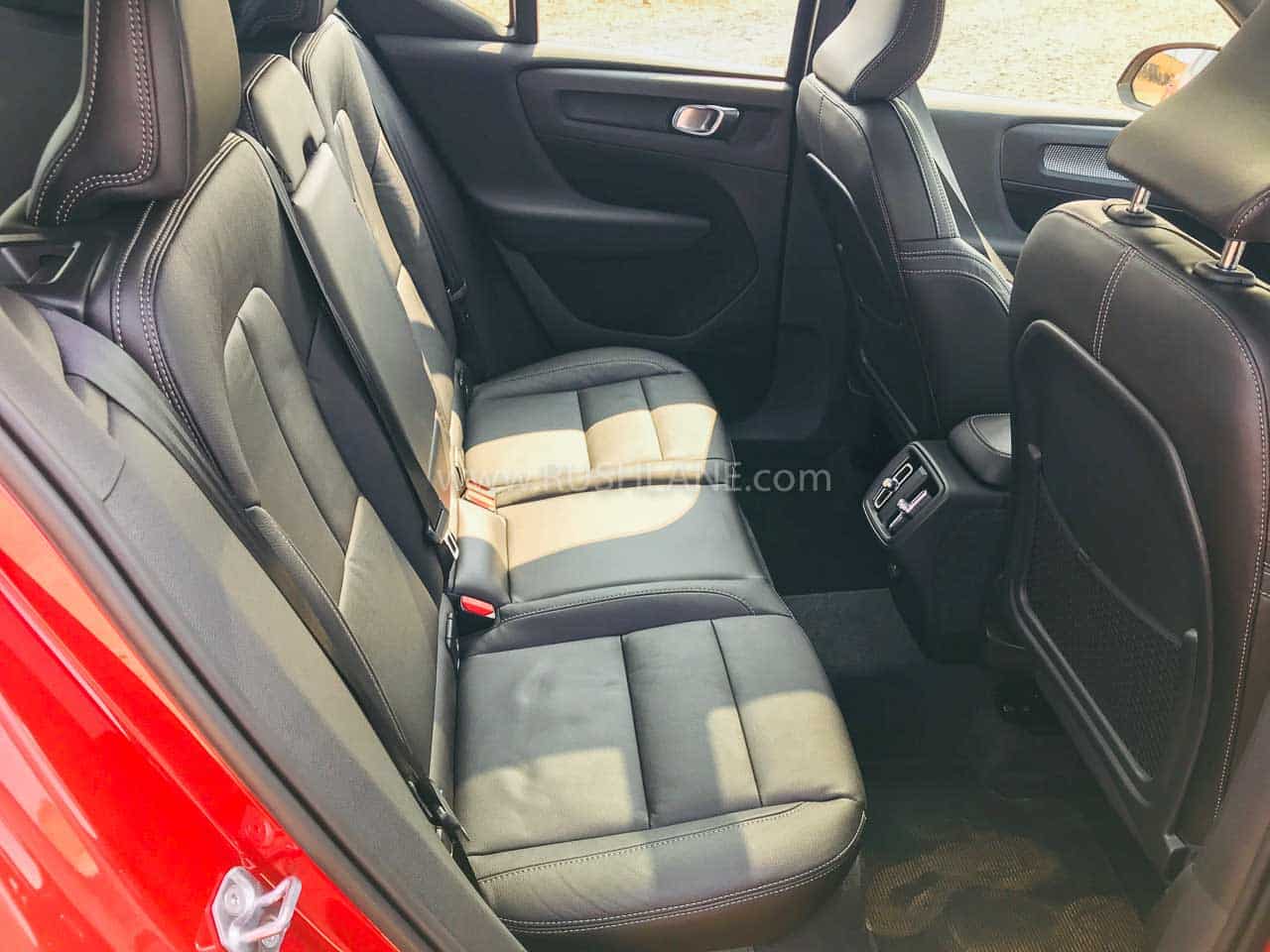 The 432-litre boot is enough to send my wife packing to her mom’s house for a good six-months, and it gets me bonus points for helping me segregate the valuables vs. the things too hard to make sense of, thanks to the folding platform that doubles up as a partition, which also opens up to a basement level of the boot where more stuff can be stowed. There are also shopping bag hooks and tie-down provisions. The rear seat folds 60:40 allowing me to pack and carry one or more human-sized teddy bears, and there is a small window at the seat-centre which allows me to store very long and narrow objects even without folding the seats, like skis. While bringing all of them up to the car you can open the boot with a simple one-leg sweeping gesture beneath the bumper, or the long press of a button on the remote key fob. You can also close the boot the same way.

Despite the same price as earlier, and the host of features explained, there has been no skimming in regards to the tech and safety features on the new Volvo XC40. The car actually features the segment-first radar-based driver assist system! The other safety features include Adaptive Cruise Control, Lane Keeping Aid, Run-Off Road Mitigation, Frontal Collision Mitigation Support, Whiplash Protection on front seats, and airbags on front, side and even one for the driver’s knee. There are several other features in the new XC40 that are well known from its predecessor. 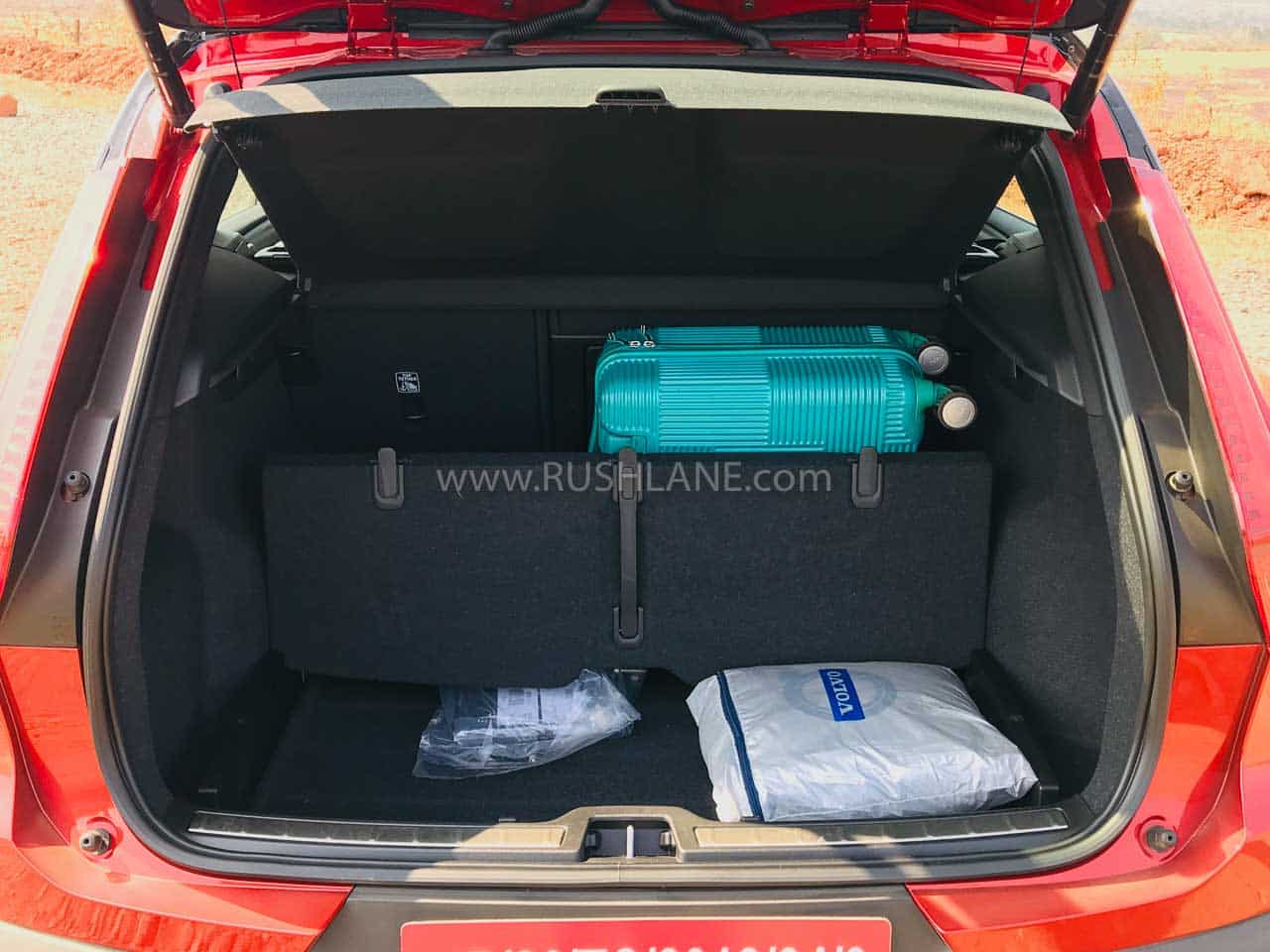 Coming to the most important change in the 2020 Volvo XC40, the new BS6 petrol engine that has replaced the well-liked 2.0-litre diesel mill. The older motor used to deliver 190 hp of maximum power and 400 Nm of peak torque, and the BS6-compliant 2.0-litre petrol engine produces the same amount of peak power and 300 Nm of torque. The lack of diesel punch is felt, even after the turbo opens up at around 2,500 rpm, and the shifts by the 8-speed automatic transmission are calm and noticeable except in the Dynamic mode. The other modes, Eco, Comfort, and Off-road, have distinctive settings, and the Individual mode lets us set some powertrain behaviour, steering feedback and braking characteristics.

Overall, the switch to the petrol motor is not at all a let-down for Volvo fans, as the performance is still good and fun at times. The power delivery is linear and the engine is rev-happy to push as much as one would like. The combined nature of this engine and the 8-speed gearbox is not really race-inspiring, but definitely more than adequate for the typical use of this sort of car. It’s a gallant commuter, versatile tourer and a great value purchase considering the assortment of features and luxury it offers as a whole for the price point.

Disclaimer – For this review, Volvo Auto India invited and hosted us at Goa. They paid for our travel, stay and food.