With a top speed of 306 km/h and acceleration from 0-100 km/h in 3.9 seconds, the Bentayga Speed is the fastest SUV in the world

It was in July that Bentley launched the facelift version of the Bentayga SUV. Speed is a sportier version of the Bentley Bentayga facelift SUV. The Bentayga Speed sets itself apart from the rest of the Bentayga range with brand new styling, revised interior makeup and a highly efficient powertrain. Its history goes back to Speed models such as the Continental GT of 2007 while its earlier counterpart was a record breaker at the Pikes Peak International Hill Climb in 2018.

Bentley Motors has detailed the Bentayga Speed which is hand built at Crewe. It receives the best on all fronts be it its exterior design, luxurious interiors and highly efficient powertrain. Where its design is concerned, the Speed SUV gets a new look all round. It sports unique front and rear bumpers, dark tinted radiator and bumper grilles, a bold front splitter, new roof winged spoiler, quad tail pipes, rear diffuser and dark tinted tail lamps. 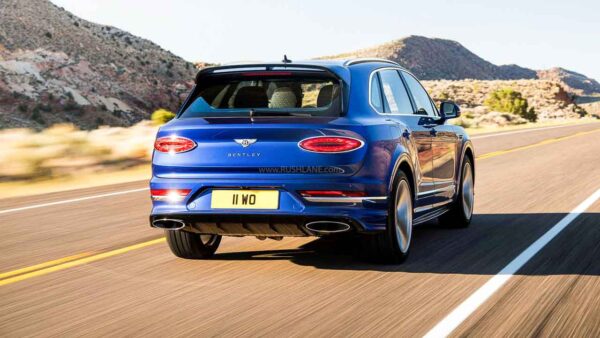 It sits on 22 inch wheels in a unique design finished in two schemes of painted and dark tint. Color schemes include 17 standard colors accentuated by 47 hues in the Extender and Mulliner range with added 24 dual tone color options. Buyers will even be given a choice of going beyond these 88 color options with the color of their choice.

Customers are also given the option of an all Black Specification Bentley Speed. This color scheme replaces the chrome accents seen on its exterior with gloss black or carbon fiber lending a more sinister stance. The gloss black or carbon fiber can be extended to the front bumper splitter and side sills, rear bumper diffuser, roof rails and roof spoilers while it also makes its way onto the 22” wheels and exhausts.

The boldly designed exterior gives way to a luxurious interior with Alcantara and other exclusive details. Alcantara is seen across the cabin with seat cushions and back rest center panels, gear lever and steering wheel. Alcantara also extends to the lower knee trim areas, upper pillar and headliner while customers can also opt for leather specifications. 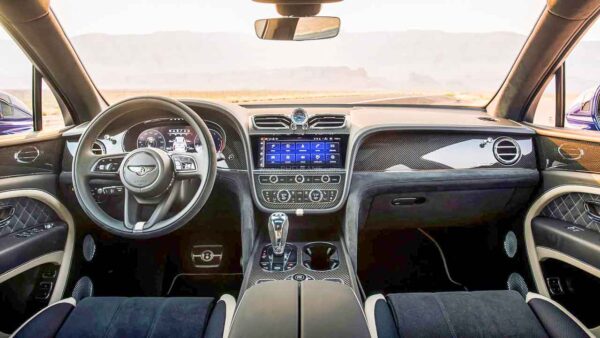 ‘Speed’ emblem is emblazoned across the back rests of all seats while the company also offers customers the choice of having the ‘Speed’ embroidery replaced by a Bentley logo. Unique to the Speed is a contrasting stitching design with diamond quilting of Mulliner Driving Specification wherein each stitching line runs through the quilting with one line matching the leather while the other is in a contrasting color. ‘Speed’ badging is also seen on the front fascia while there are also ‘Speed’ illuminated treadplates

Bentley Bentayga Speed boasts of the ultimate in technology and infotainment. Spanning its entire front central fascia is a high resolution 10.9 inch touchscreen with anti reflection and anti glare finish. This can be accessed via hard keys under the screen or via the main menu screen while the customizable dashboard can be configured to show up more often used functions like phone, navigation and media. 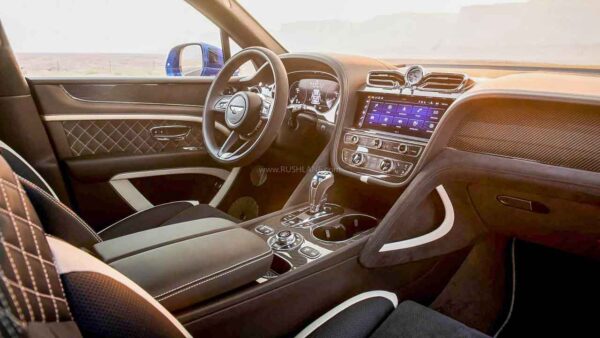 A fully digital driver information system can be customized as per owner’s preferences with features and real time lighting effects. Apple CarPlay, Android Auto compatible infotainment screens and smartphone display are all a part of its onboard technology. The high resolution screen can be viewed in Classic or Expanded formats.

Classic displays are in a traditional two dial design of speedometer and tachometer while in Expanded format the right dial is replaced with area for maps and media information. Head-Up Display shows off traffic conditions, street names and distance to destination while Navigation has been improvised with three dimensional building display and satellite maps. 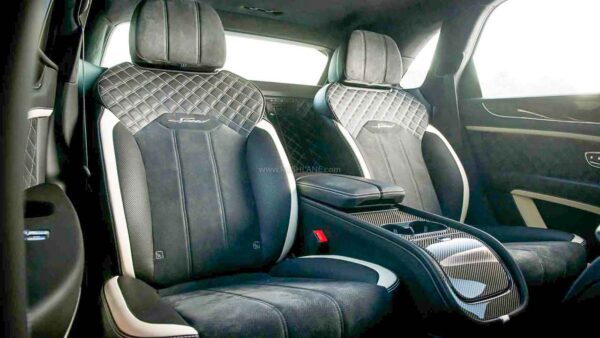 MyBentley in-car and remote connected car system are now via an embedded SIM and not via the buyer’s mobile phone. These connected car features relay real time traffic conditions, over the air map updates, green traffic light and local hazard information. The Bentley App can also be used for find-my-car and lock-my-car depending on region. 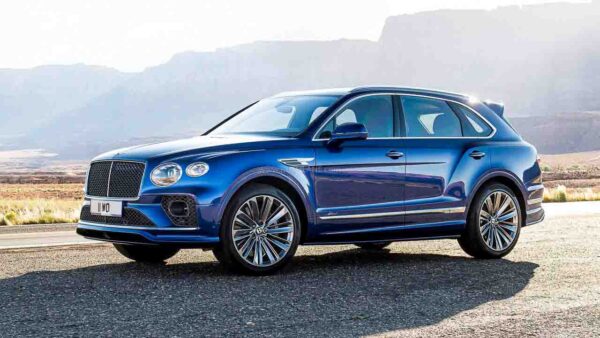 It also gets cylinder deactivation unit, making it possible to switch between A and B Bank to minimize cylinder and catalytic converter cooling to avoid spikes in exhaust emissions. This not only reduces CO2 emissions but also enhances efficiency of part throttle cruising conditions. The automatic transmission can be coupled from 5th to 8th gear to allow the SUV to roll with engine idle or ‘sail’ as Bentley calls this feature. Once throttle is reapplied, or when the car starts to go downhill with an increase in speed, the transmission can be re-engaged.

Bentley Speed is fitted with a Torque Vectoring Brake System with more responsive braking wherein the car lightly brakes the inner rear wheel at corner entry to sharpen the front axle turn in. Bentley Speed receives optional carbon ceramic brakes which are the largest and most powerful with maximum braking torque of 6,000 Nm and which can tolerate temperatures upto 1,000 °C. These are lighter over iron brakes by more than 20 kgs.