Isuzu MU-X comes across as an attractive looking SUV and its features list is pretty decent as well. However, the company is still to launch the BS6 variant, which has been delayed due to the pandemic situation. It is expected that MU-X BS6 will be launched in October in the price range of Rs 29 lakh to Rs 32 lakh. It will rival the likes of Ford Endeavour, Toyota Fortuner, Mahindra Alturas G4 and upcoming MG Gloster.

In its home market Japan, next-gen Isuzu MU-X is expected to be launched next year. Leaked patent images of all-new MU-X reveal a range of updates that enhance the SUVs visual appeal. While the core silhouette is largely the same as earlier, the front fascia has been revised. Changes have been introduced in the headlamp design, front bumper, air dam and front skid plate. The grille gets fanged slats and fog lamps have been placed at the edges.

The side profile appears to have been left untouched, as prominent design elements such as rising beltline, chrome garnished window line, muscular wheel arches and signature character lines are the same as earlier. At the rear, changes include new chrome accents and LED wraparound tail lamps.

As MU-X is based on D-Max pick-up truck, the changes are similar to those introduced on all-new D-Max. As may be recalled, all-new D-Max was unveiled last year. Next-gen MU-X interiors are expected to have similarities with that of next-gen D-Max. Next-gen MU-X will also be sharing several parts and components with next-gen D-Max, something that will help Isuzu in reducing production costs.

Engines as well as transmission options of manual and automatic are also expected to be the same for both vehicles. Top-spec variants are likely to provide the option of four wheel drive system. Next-gen MU-X could utilize the ladder frame chassis, as is being used with latest D-Max. 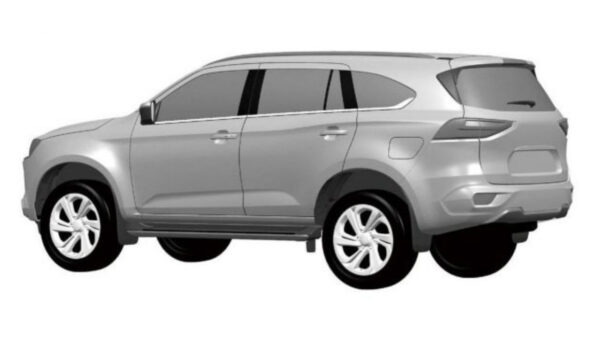 Second-gen Isuzu MU-X will be first launched in Southeast Asian markets. Launch in India is expected by 2022/23. Till then, the upcoming BS6 variant will continue to soldier on.