The first generation Maruti Alto soldiered on for ages without much changes but as the Indian automotive market matured, the product life-cycle started to get shorter and shorter. So, the second generation model which was introduced in 2012 is due for replacement now and Maruti Suzuki has commenced testing prototypes. A fully disguised, near-production test mule of the 2021 Maruti Alto has been spied.

Earlier reports suggested that the new Maruti Alto will have crossover-like styling which was pioneered by the Renault Kwid in the small car segment. If the recently spotted test mule is to be taken as a reference, it seems the automaker is sticking to the iconic nameplate’s traditional design traits with small footprint and simple lines. The S-Presso already covers crossover fans in this segment.

The proportions in profile appear to have been tweaked and this could result in better interior room. The greenhouse has gotten sleeker while the roof and rear fascia are revised significantly. 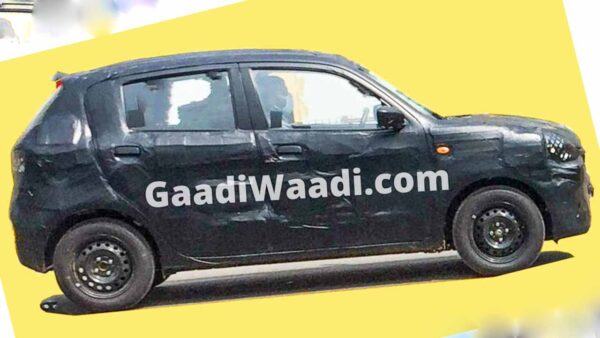 The bonnet is noticeably longer in profile than before and the overhangs at both front and rear are longer than before as well. The 2021 Maruti Alto is likely to offer considerable improvement in rear passenger space and boot capacity.

The new generation small car is also expected to feature a fresh interior with new layout. However, we expect several bits to be borrowed from other Maruti small cars like WagonR and S-Presso. Keeping up with the industry trend, Maruti should be equipping the top-end variant with a touchscreen infotainment system.

The Suzuki Heartect modular platform which underpins the recent Maruti small cars is a viable hardware for the next generation hatchback. This platform should help Maruti’s bread and butter model to comply with the latest safety norms while keeping the kerb weight well within the limits to achieve good fuel economy.

Speaking about powertrains, the new Maruti Alto is expected to employ improved versions of the existing 800 cc and 1.0-liter three-cylinder petrol engines which are known for their efficiency, longevity and reliability. Both manual and AMT options will be on offer.

We won’t be surprised if the automaker comes up with a pure electric variant sometime down the line. If at all there is a Maruti Alto EV in the future, it will inherit the powertrain from WagonR EV which is currently undergoing intense testing.