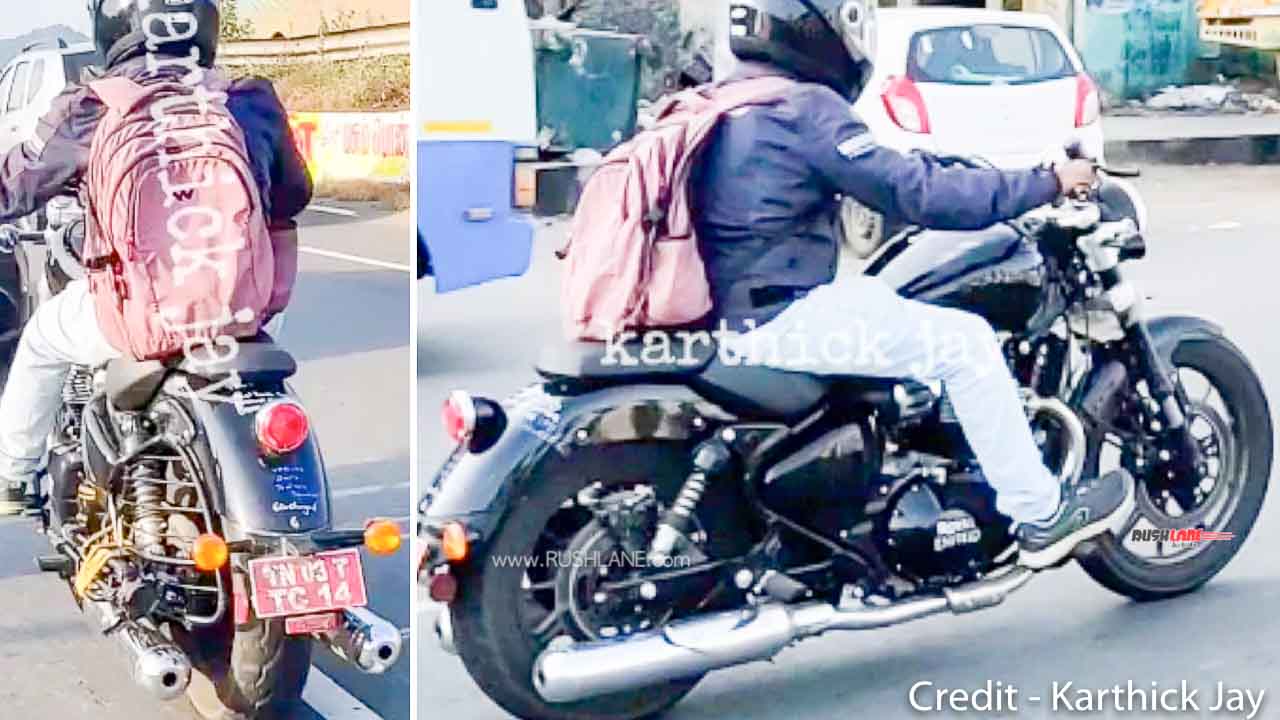 First ever spy shots of the all new Royal Enfield 650cc cruiser are now all over the internet. All thanks to biker and automotive enthusiast, Karthick Jay, who spotted the upcoming RE on the Perungalatur to Tambaram highway, which is about 30 kms from the Royal Enfield manufacturing plant in Chennai, Tamil Nadu.

We all knew this was coming – the twin engine’d RE cruiser. It was only a matter of time, and now thanks to Karthick, we have a better idea about the bike and its launch timeline. From the spy shots, it is clear that this is a pre-production test mule, which is not very far from production ready. From this, one can expect the new Royal Enfield Cruiser 650cc to be launched by Diwali 2021.

From the spy video which was revealed last week, it was not clear whether the motorcycle has a chain drive or a belt drive. Many fans had the confusion over this. But with the latest spy images shared by Karthick, it is now clear that this RE cruiser has chain drive and not belt drive. Take a look at the video below.

As can be seen in the video above, what was mistaken for to be a belt drive, is in fact the disc brake. This is also the setup which is seen on board the 650 Twins – Interceptor and Continental. Both these RE bikes come with chain drive, which is on the left side of the rear wheel, while the disc brake setup is on the right side of the wheel. The new 2021 Royal Enfield 650cc Cruiser also has a similar setup.

In his youtube video, Karthick has tried answering some questions fans have had regarding the bike. Speaking about performance, he answered, “from what I have noticed the engine was so smooth just like continental the bike looked more like bobber version , I believe it’s the same 650 cc engine from the continental twins… The sound wasn’t so roaring it was just so smooth but so quick… It was chain drive … ”

“Am not really sure about the suspension but as I said early it wasn’t a usual RE it was so quick and so responsive to throttle no sound but just gone. The bike comes with dual channel abs system and the cooling system is just like in the continental twins can see the liquid cooling radiator… Also the first bike from RE with upside down forks…”

Many fans have been waiting for RE with USD forks. Finally this will be answered, with the upcoming Cruiser 650. This will also be the first time we will see a Royal Enfield motorcycle with USD forks in the front. Disc brake setup is same as 650 Twins, single disc in the front and rear with dual ABS.

Front tyre looks bigger than the rear. This will help the RE Cruiser 650 look longer and bigger than it actually is. Rear tyre is fatter than the ones we have seen on 650 Twins, which gets 130 section tyre. From the video, it looks like this will be the longest and biggest RE bike made till date, as far as the dimensions are concerned. The rider position is low slung, with footrest in forward position. This will help riders feet to stay away from the hot 650cc engine.

The video also gives us a glimpse at the instrument cluster. For now, it seems like carrying the same unit, which will be seen in the upcoming Meteor 350. This unit comes with analog as well as digital display. There is also bluetooth compatibility, for turn by turn navigation.