There has been a lot of talk about the new Tata Safari which was recently unveiled. While some are happy that the iconic nameplate is making a comeback in a good looking premium package after a short sabbatical, others are skeptical about the new vehicle’s ability to do justice to the nameplate’s off-road prowess and emotional appeal.

While we think the new Tata Safari is a handsome looking SUV with an imposing presence and good overall proportions, it has got no connections whatsoever to the original Safari’s styling. We couldn’t help but wonder how the new Safari would have looked had it derived a few design inspiration from its boxier predecessor, instead of the Harrier.

So, our in-house design expert Pratyush Rout went to work with this as his brief and came up with a speculative rendering, an alternative school of thought, if you will.

The objective was to retain some of the old Safari’s recognizable design elements while embracing Tata Motors’ modern design language. The rectangularish grille and headlamps are shout-out to the old car but LED elements and chrome embellished meshing bring in a modern appeal. 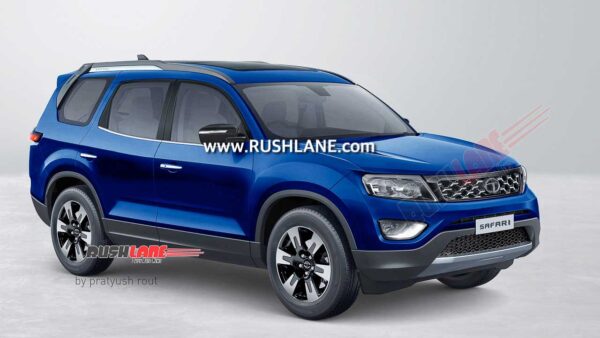 Prominent auxiliary lamps and a sporty bumper with silver chin subscribe to the latest trend as well. The bonnet is boxier (a crucial connection with its predecessor) than the real new Safari.

The profile and the rear fascia of this speculative rendering more or less follow the real deal. Overall, we think the rendered version portrays more off-road appeal than the Harrier-derived front fascia. How do you like it?

Scheduled to be introduced on January 26th, the new Tata Safari will be pitted against the newly launched MG Hector Plus. The powertrain specifications are expected to be carried forward from the Harrier without any changes.

That would mean a 2.0-liter FCA derived diesel engine which generates 170 hp and 350 Nm of torque. Both manual and automatic transmissions are expected to be on offer. Drive will be sent to the front wheels.

There is also a petrol engine in the works but it remains to be seen if it will be made available from day one or introduced at a later stage. The motor in question is a new 1.5-liter four-cylinder Revotron turbocharged unit which is estimated to develop around 150 hp and 250 Nm of torque.

We hope the automaker comes up with an AWD variant sooner than later. A monocoque Safari is not a bad thing given the platform is derived from proven Land Rover architecture but an FWD Safari is definitely an oxymoron as far as the nameplate’s existing fan base is concerned.