Connection of Indian car brands with Geneva Motor Show has been growing stronger over the years. And 2019, probably saw this connection at its strongest. Tata Motors started the day with the global unveil of four new cars, in the presence of Ratan Tata. Mahindra too joined the Geneva party in some style. Their Pininfarina brand unveiled an electric hypercar which is more powerful than Bugatti Chiron. Anand Mahindra arrived with Pawan Goenka and his colleagues from South Korea, to show the world new generation Korando SUV.

Korando means Korea. SsangYong is a subsidiary of India’s Mahindra, and is based in South Korea. Korando is the longest surviving nameplate of the company. The new SUV is positioned between the Tivoli and Rexton. Not only it is larger than before, it is also more powerful than before.

2020 SsangYong Korando is positioned on the modified X100 platform, that also underpins the Tivoli and Mahindra XUV300. It gets styling cues from the SIV-2 concept. Design cues include a sleek new grille and airdam, full LED headlamps, a prominent shoulder line, modified wheel arches and roof rails that run all along the roof line.

Design elements at the rear include wrap around tail lamps which are all LED units. The new Korando measures 4,410mm in length, 1,830mm in width and 1,675mm in height. It gets a 2,650mm wheelbase making it longer, lower and wider than its earlier counterpart. 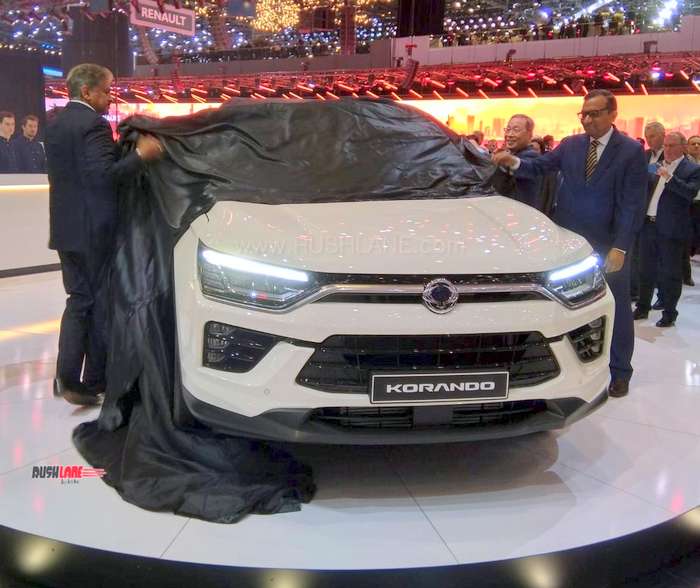 Interiors boast of a ‘Blue Cockpit’ design while it also gets mood lighting, brown and black dual tone upholstery and infotainment via a 10.25” touchscreen infotainment system. There is also a 9 inch digital instrument panel which enhances the appeal of the dashboard. On board safety features will include emergency braking, lane keeping assist, driver attention assist and intelligent adaptive cruise control. It will also get safety distance alert while ABS and EBD will be standard features.

SsangYong Korando will be offered in a choice of new petrol and diesel turbo charged engines. The platform could be used to build next gen Mahindra XUV500, which is currently in R&D. Exterior design of Korando could also inspire XUV500 of future. Korando will also be launched as an electric car, and will become SsangYong’s first electric car upon launch.