Bajaj Auto discontinued the Discover range of commuter motorcycles ahead of BS6 emission norms. In the final BS4 era of its 16-year market run, the Bajaj Discover was available in two formats: 125 and 110.

Previously, there were ‘100’, ‘135’ and ‘150’ models as well. However, tighter competition and lower demand eventually led to their discontinuation. Bajaj Auto’s Pulsar series have also played a part in reducing its desirability.

Chances of the Chakan-based manufacturer reintroducing its Discover lineup in an upgraded BS6 format are not bleak. In the 125cc-135cc segment, Hero MotoCorp and Honda Motorcycle India are clearly the most dominant names. Meanwhile, KTM India has diversified this segment into sportier choices with the 125 Duke and RC125 siblings.

The Bajaj Discover, let alone commuter motorcycles, may not be the best choice for customisations. Yet the trend of converting used or neglected small-capacity motorcycles into creative examples have been popular in the country for quite some time. It was only recently that we shared a ‘Bajaj CT100 Cafe’ build from Sunam, Punjab. Jaipur-based Kunwar Customs has made a similar approach with a 2013 Bajaj Discover 135. Here’s a walkaround video on it by automotive YouTube channel Throttle 98:

Kunwar Customs’ Bajaj Discover cafe racer build dates back to early 2019. The video suggests that it has seen a lot of kilometres as the custom body components have minor scratches and wear all across.

Throttle 98 states that the customisation cost Rs 70,000 (arguably on the higher side) in addition to a donor motorcycle. Most panels were handbuilt while certain parts were borrowed from previous-gen Yamaha FZ and Bajaj Avenger models. 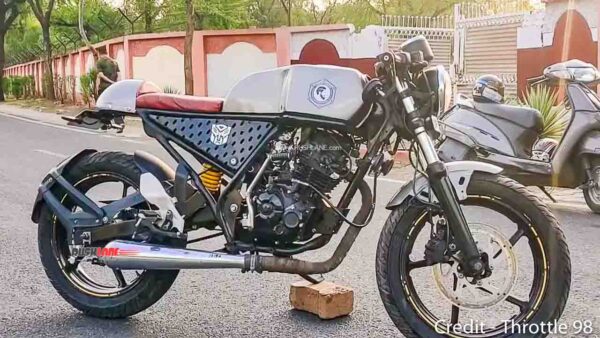 There are no major changes to the power plant. In its healthy stock format, the 134.21cc air-cooled DTS-i single-cylinder engine was tuned to produce almost 13bhp @ 8,500rpm and 11.88Nm @ 6,500rpm. This is mated to a 4-speed gearbox (one of the reasons why the motorcycle was less desirable). Ex-showroom prices stood at roughly Rs 61,000.