Spied first time in Ladakh last month, the new 2019 Bajaj Dominar has now been spied once again. This time closer to its home – Bajaj plant in Pune. The latest spy video was shot by Youtuber VishMoto on the old Pune-Mumbai highway.

The video shows rider of current Bajaj Dominar trying to catch up / chase the 2019 Bajaj Dominar on test. On realizing that the old Dominar rider is recording a video, the new Dominar test rider tries to zip past the highway traffic. All this has been captured on a video which can be seen below. 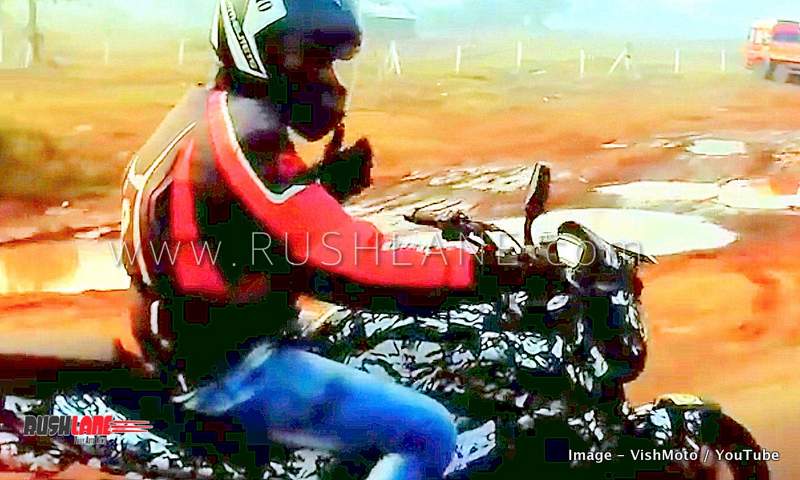 Though spied under camouflage, there are several feature updates that will be seen on the new Bajaj Dominar 400. Launch date is scheduled for later this year or early 2019. New Bajaj Dominar 400 will be seen with a host of feature updates as compared to its earlier counterpart which has been on sale since 2016. It will also get a new color scheme while prices will be increased by around Rs 15,000.

2019 Bajaj Dominar 400 will get enhanced performance via upside down front forks as against conventional telescopic forks seen on its earlier counterpart. The Dominar 400 will also get higher ground clearance with a new twin canister exhaust which has allowed the relocation of catalytic converter from under the engine to alongside the rear wheel.

Ride position has also been improved, thanks to taller handle bars and a longer pillion seat. The radiator is also visibly larger allowing for better cooling of the engine in stop-start traffic conditions. The new Dominar 400 will continue to ride on 17 inch alloy wheels fitted with tubeless tyres.

Engine specifications on the 2019 Bajaj Dominar 400 would be same as current one – 373cc, single cylinder engine that now complies with new BS VI emission norms. The engine on the current Dominar 400 offers 34.5 bhp power and 35 Nm torque while will be tweaked for added power and torque on the new Dominar 400. The engine will get mated to a 6 speed gearbox.

There will also be a marginal increase in price as compared to the current Dominar 400 which is priced at Rs 1,48,043 for the non-ABS version and at Rs 1,62,074 for the ABS variant to a speculated price of around Rs 1,80,000. The new Dominar 400 will compete with likes of Mahindra Mojo and Royal Enfield Classic 350.