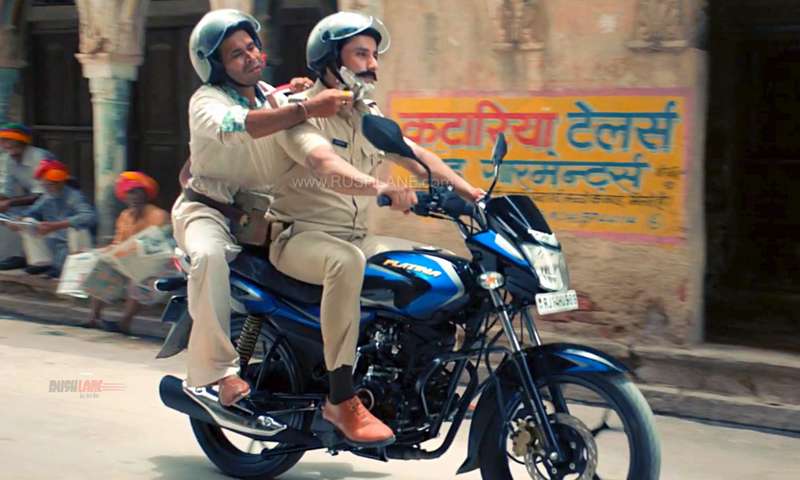 Bajaj motorcycle ads are always a bit different from the rest. From the old Pulsar ads of ‘Yes its a BOY’ or ‘Definitely Male’, to the Bajaj Dominar ads of ‘Haathi Mat Paalo’ – Bajaj marketing team tries to get the point across in a way, that will make sure their target audience remembers the product, for its USP.

One of the recent TVC video released by Bajaj Auto, is that of their new commuter motorcycle – Platina H Gear. The TVC video comes with the tagline which asks a question – Gaadi pey daadi banegi ki nahi?

Gaadi pe daadi, basically implies, getting a shave while riding. Yes, that is what the duo on motorcycle attempt to do, while astride the new Bajaj Platina H Gear (and while wearing a helmet – thankfully). Below is the new TVC of Bajaj Platina H Gear, highlighting the smooth riding dynamics of the motorcycle on Indian road conditions.

Bajaj Platina 110 H Gear can be considered as a premium version of the standard Platina 110 motorcycle and it offers segment-first 5-speed gearbox. Short for Highway Gear, the H Gear (fifth gear) allows smooth rides on highways, all while improving fuel efficiency. Under ARAI test conditions, Platina 110 H Gear is rated to deliver mileage of 84 kmpl. However, in actual driving conditions, mileage could be anywhere between 70-75 kmpl.

Platina 110 H Gear is also equipped with feather touch gear shift mechanism, which ensures seamless gearshifts in city traffic conditions. Rider fatigue is reduced significantly with the new gear shift mechanism even when riding the bike continuously for several hours. Platina is a brand that is synonymous with comfort and the new Platina 110 H Gear is being touted as the most comfortable Platina ever designed.

Other key changes that can be seen on new Platina 110 H Gear include an updated instrument console with gear position indicator. There’s a gearshift guide as well that prompts the rider to shift the gear up or down in case the wrong gear is engaged at a specific speed. Bajaj Platina 110 H Gear gets its power from a 115 cc single-cylinder, air-cooled unit that generates max power of 8.5 hp @ 7,000 rpm and max torque of 9.81 Nm at 5,000 rpm.

In just around a month of its launch in June, new Bajaj Platina 110 H Gear has undergone an upward price revision. The bike is available in drum brake and disc brake variants and prices for the same have been increased by Rs 499 and Rs 998 respectively. Revised prices are Rs 53,875 for drum brake variant and Rs 56,371 for disc brake variant.

Reason for the price hike has not been revealed, but it is likely due to rising input costs. Bajaj has also increased price of other bikes such as Pulsar 150 range, Pulsar 180F and 2019 Dominar 400 (UG). The price hike for Bajaj bikes appears to be in line with industry trends wherein other two-wheeler manufacturers have also increased prices of their products in recent times.