India’s growing electric two-wheeler portfolio has been seeing a lot of activity in recent times and the revived Bajaj Chetak is the newest entrant to the party. If you think about it, a good majority of EV brands primarily focus on the scooter segment since it is the most viable platform to package an electric powertrain within a reasonable price bracket with today’s battery and motor technology.

Certain start-ups are betting on electric motorcycles as well; the latest example being the Ultraviolette F77. However, we still have to wait and see whether these motorcycles can actually be a desirable alternative to an ICE product coming in the same price category. Now, Bangalore-based Barrel Exhaust has built something interesting from its ‘Barrel Electric’ division — an all-electric Bajaj Pulsar.

However, the Bajaj Pulsar 150 is just a donor bike for Barrel Electric’s long-term goal which is even more interesting. The team aims to build the fastest electric two-wheeler in the country with a targeted top speed of 300km/h!

While the fastest EV is still a long way into the future, CEO of Barrel Exhaust, Mr Giridhar Soundararajan shares with us that the all-electric Bajaj Pulsar has impressed everyone with its results from a series of road tests. The motorcycle was originally owned and ridden by Giridhar himself for many years before it was given new life for a budget of almost Rs 1 lakh.

The entire conversion process was done in-house by Barrel Electric’s team comprising of young automotive engineers and EV enthusiasts who have done similar projects from a college level. As you would be able to guess from the images of Bajaj Pulsar electric motorcycle, the team is not done with the build and is constantly changing and experimenting with different components such as the motor, battery, swingarm, sprocket, etc., to attain the best combination and thereby, the best performance and range. 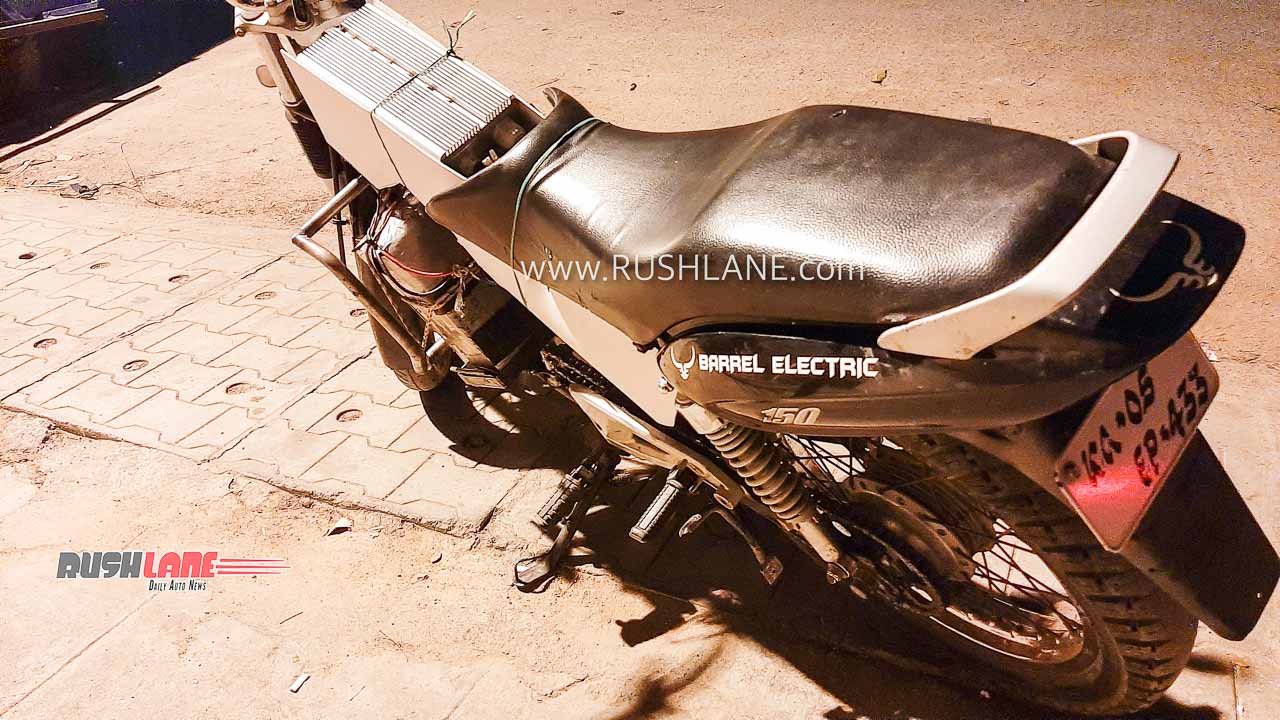 In its most recent avatar, the all-electric Pulsar employs a 2.5kW motor. Coupled to a developmental battery pack, the ‘e-Pulsar’ managed to hit a top speed of 90km/h in a recent road test. Furthermore, it returned a range of 85km on constant full-throttle. Owing to this, Barrel Electric claims it will be able to return a range of around 125km in real-world riding conditions.

Speaking about the Pulsar electric motorcycle project, Giridhar says, “We have achieved so far a top speed of 90 kmph but few improvements would be done along with motor upgrade to push the bike for a top speed beyond a 100 kmph. At constant full throttle the bike did around 80kms on a single charge and we expect the range to be about 100 kms at economy mode. The battery (Li-ion) currently charges in about 2hrs and 30 mins.

“A completely new frame is under development and will be soon ready for testing with upgraded battery and motor spec. Apart from this the Barrel Electric team is working on another project to build India’s fastest electric vehicle and hopefully we get there by the end of 2020.”

As mentioned before, the electric Pulsar prototype is just a gateway to Barrel Electric’s ultimate vision of the fastest electric two-wheeler from India. But the test results of the preliminary prototype were so impressive that many have got in touch with Barrel Exhaust to check whether the conversion is available for interested owners of the Bajaj Pulsar. As a result, the company is looking into commercialising the conversion while working on their original project in parallel.

Barrel Electric is currently welcoming investors. A made-in-India two-wheeler which can hit 300km/h emission-free is definitely something we are excited to see in the future; a fresh concept in a sea of electric scooters and commuter motorcycles that would eventually flood the Indian market.