With a crazy number of fancy number plates, it may sometimes be difficult to know what’s special about a registration number sequence, whereas others are easier to identify. The marketplace adapts quickly and font tweaks help attain a desired result.

The ones that get you to stop and take notice are numbers that generally look like words and sometimes it takes a bit of thought to determine what the number sequence may actually be. It’s a prevalent practice to write the registration number in a stylized number so it looks more like a word than a number. 8055 is a commonly sought. In the right font there’s nothing that’ll stop you from reading it as ‘BOSS’.

If this was not enough, there are those who go ahead and blatantly post stickers on their number plate with weird captions, which are sometimes abusive as well. Recently, a traffic cop in caught a biker who was riding a Bajaj Pulsar NS 200. He stopped him for two reasons – one that he was not wearing a helmet, and the second – his number plate had the sticker reading “CHAL BHEN***D”.

After stopping the biker, the cop asked for a valid driving license. The biker did not have. Neither he have any document of the bike. After failing to produce any valid id or bike papers, the cop decided to confiscate the bike, as well as the biker. 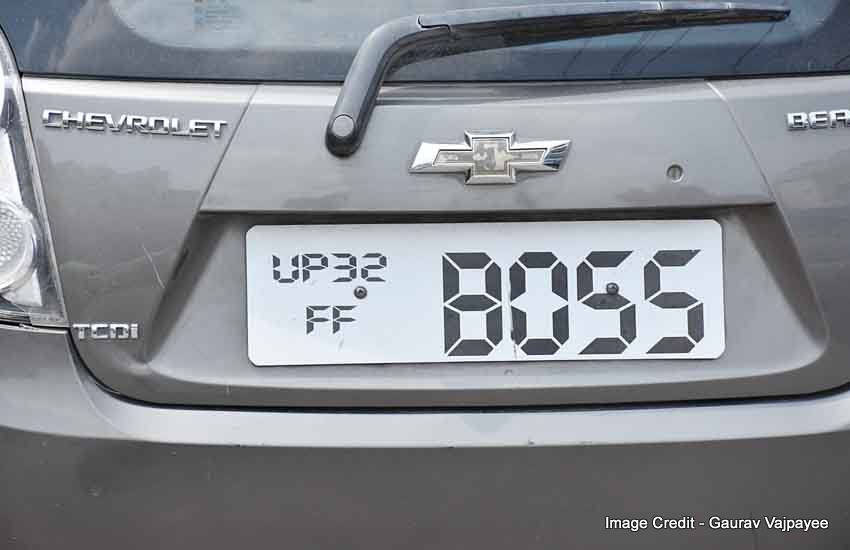 Using stickers / fancy fonts for a registration number is a violation of Section 51 of the Central Motor Vehicles Rules, 1989, which dictates the specifics that need to be adhered to.

Since the market is innovative, solutions are found in quick time and new designs created constantly. This makes it all the more difficult to track the emergence of numbers as sought after. Evolution of number plate creatives continues unabated.

The number 4129 is at times written in Hindi in stylized font as Daaru in Hindi. All registration numbers are to be written in English but the norm is openly flaunted. The number sequence of 8148 is stylized as ‘BIG B’. 4141 takes the form of PAPA. 0214 reads like ‘RAM’. 4061 can read like YOGI. 4749 is MODI in hindi. The list keeps evolving.

While such activities warranty penalties, it is in fact quite difficult for the transport department to curb the practice despite traffic police policing such violations.

Even though the Motor Vehicle Act identifies the practice as an an offence, since the penalty associated with it is low, people aren’t deterred from altering registration number fonts / sticking stickers to suit their preference.

The RTO has now decided to play one up and has identified 25 such numbers that are easily modified and in demand. In addition to this, they have also decided that any no plate with sticker on it which displays anything apart from the vehicle’s registration number will also be fined.