Maruti Suzuki cars which claimed the top 6 positions on the list during February 2019 included the Alto, Swift, Baleno, DZire, WagonR and the Brezza. Alto has always remained a favorite in Maruti Suzuki lineup, bringing in volumes to the automaker each month. There were a total of 24,751 units of this entry level hatchback sold last month as compared to 19,769 units sold in the same month of the past year, an increase of 25 percent. The company is now set to launch the all new Alto later this year with new powertrain options.

A total of 18,224 units of the Swift were sold in February as against 17,291 units sold in February 2018. In third spot was the Maruti Suzuki Baleno with 17,944 units sold. The Baleno was a part of a recall last month to check and update the Actuator Assembly ABS software, but still managed to notch up good numbers in terms of sale. Despite its prestigious position on this list, Baleno sales dipped 24 percent as compared to sales in the same month of the previous year which stood at 15,807 units.

11,613 units of the Maruti Brezza were sold last month with the sub 4 meter SUV commanding a No. 6 spot on the list. Maruti Suzuki also had the Ertiga, Eeco, Omni and Celerio on this list of 25 best sellers at Nos. 11, 13, 14 and 22 respectively, each of which noted positive sales with the exception of the Celerio which saw sales dip 47 percent to 3,631 units as against 6,842 units sold in February 2018. 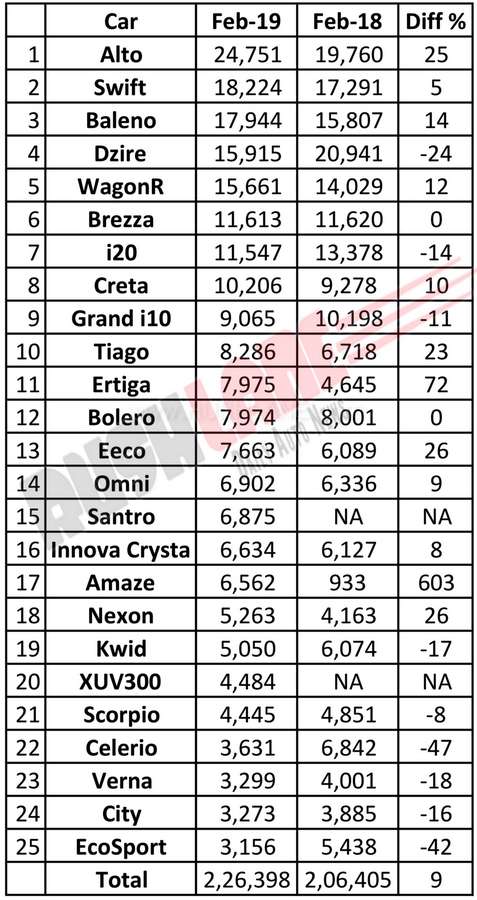