Called BMW G310SS or Super Sport by the maker, the bike was first showcased at the BMW Motorrad Days in Japan earlier this year. It was also on display at the Intermot Show in October and at the EICMA Show in Milan in November 2018.

Young Machine has finally caught up with the maker of this modified G310R, and revealed new details. The exclusive BMW G310SS Supersport is seen with extensive use of carbon fiber throughout its body. The entire body is wrapped in carbon fiber.

You will also find a lot of parts similar to the S1000RR. For example, the face of Center Lam Air duct is exactly like the S1000RR – BMW’s flagship superbike. The G310SS gets imprinted on fairings showing off its racing stance while it also gets a full cowl. Its bodywork is borrowed from the BMR S1000RR with grilled side fairings and nose spoiler.

Some parts also remind of TVS Apache 310, which is a production spec fully faired sports bike based on BMW G310R. The G310SS Supersport gets a dark paint scheme with white stripes as is also seen on the top sped S1000RR models. It gets a signature twin headlamp assembly, exhaust unit under its seat while foot pegs, rear monoshock, fuel tank and seat sections are finished in white with graphics. 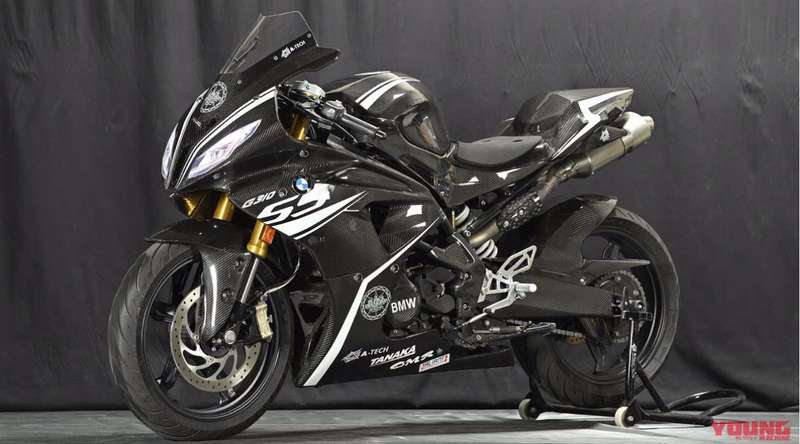 BMW has not revealed any production plans of a supersport bike based on the G310R. But if they did, it will not be very different than the G310SS below. It will be a perfect rival to the likes of Honda CBR300R, Kawasaki Ninja 300 and KTM RC390.