BMW i8 owned by Sachin Tendulkar modified by DC Design

Master Blaster Sachin Tendulkar and his love for supercars is well known. He owns some of the most exclusive luxury cars in India. He is also the brand ambassador of BMW in India. He owns a range of BMW cars that include a BMW 7 Series, BMW M3 and a BMW M4.

He also owns the hybrid sportscar, the i8. He has been spotted on the streets of Mumbai in many fancy cars. He is also a regular at the Buddh International Circuit where he races some of the fastest production cars in the world.

His BMW i8 Plug-in Hybrid Sportscar, in which he has been regularly spotted, has been given a makeover. It has been fully customized by DC Design. The stock car which was a shade of white and blue, has been given a sporty paint shade of red and white with custom black accents. 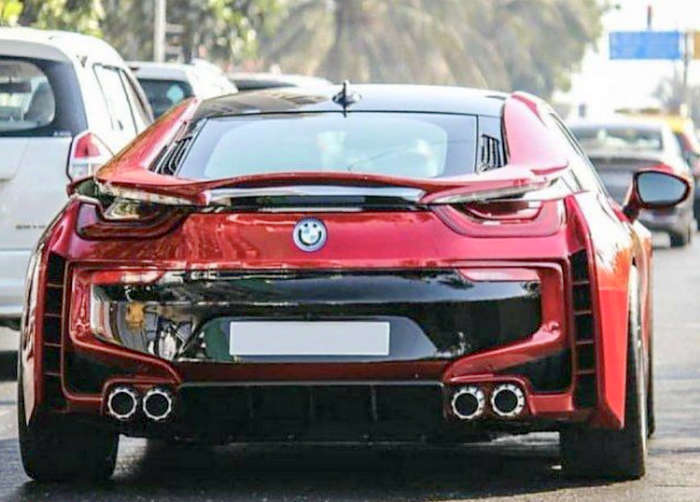 The BMW i8 gets DC Design updates that include a custom grille adding a more aggressive stance to its front end, new bumpers and larger air dams. There is also a new front bumper splitter that is added to enhance sportiness. DC Design elements to the rear includes new bumpers, quad exhaust tips and a vented bumper panels that show off a wider body.

The BMW i8, which is the first hybrid sports car from the German automaker, gets power via a 1.5 liter, 4 cylinder petrol engine along with an electric motor. The petrol engine offers 231 bhp power and 321 Nm torque while the electric motor adds another 131 bhp power and 250 Nm torque taking combined power and torque figures up to 362 bhp and 570 Nm. Acceleration from 0 to 100 kmph is achieved in 4.4 seconds. It is priced at over Rs 2.62 cr, ex-sh, Delhi.