RUSHLANEDAILY AUTO NEWS
HomeBike NewsCarrying Cycles On Car Could Get You A Fine Of Rs 5,000

Carrying Cycles On Car Could Get You A Fine Of Rs 5,000 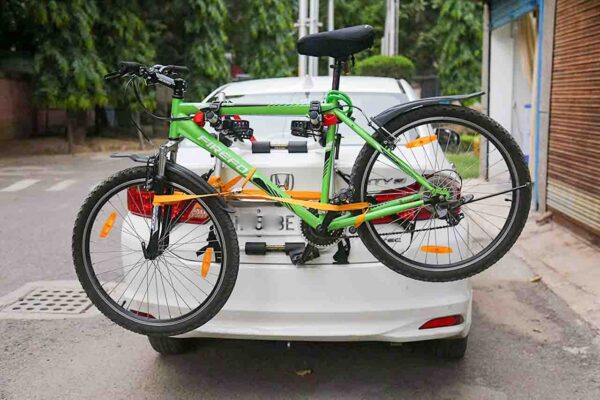 In COVID-19 times, when the only sport seems to be solo cycling in accordance to social distancing norms, this privilege is also being denied to the public or then they have to shell out a hefty fine.

Prashant Sukumaran, a resident of Bengaluru’s Electronic City was travelling with his son with twin cycles attached to the rack at the rear of their car. The duo were stopped by the police and fined Rs.5,000. Their crime – carrying one cycle is permitted but they were carrying two. Fine for carrying cycle on a rack attached to the car without proper permission stands at Rs.5,000.

This incident has attracted the attention of Bhaskar Rao, ADGP, Bengaluru Police. He is also an avid cyclist and tweeted that the carrying of cycles on cars is not an offence. It is only when the rear and top overhang and there are protrusions that it is an offence as it poses a danger to others on the road. 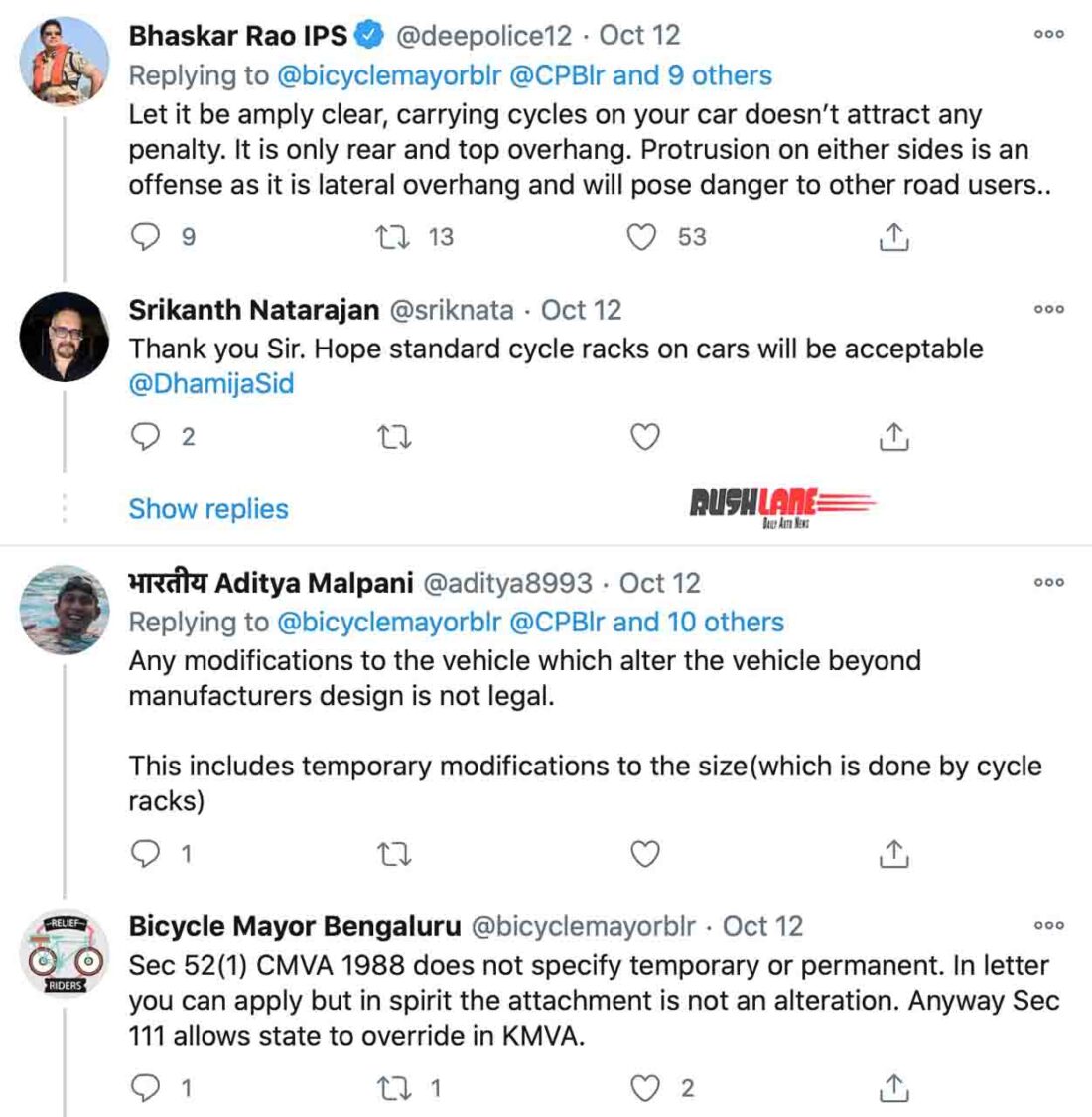 Mayor of Bengaluru – Sathya Sankaran, also known as the Bicycle Mayor has stated that this was a recent regulation and he had never heard of citizens being fined for carrying cycles on cycle racks attached to cars. There is no mention of temporary or permanent attachment in Sec 52(1) of Central Motor Vehicle Act 1988 either.

Another cyclist, Anuj Pratap Rao argues that there is bound to be some protrusion on either side of the car as no mid size compact car will be wide enough to accommodate a full size cycle end to end. 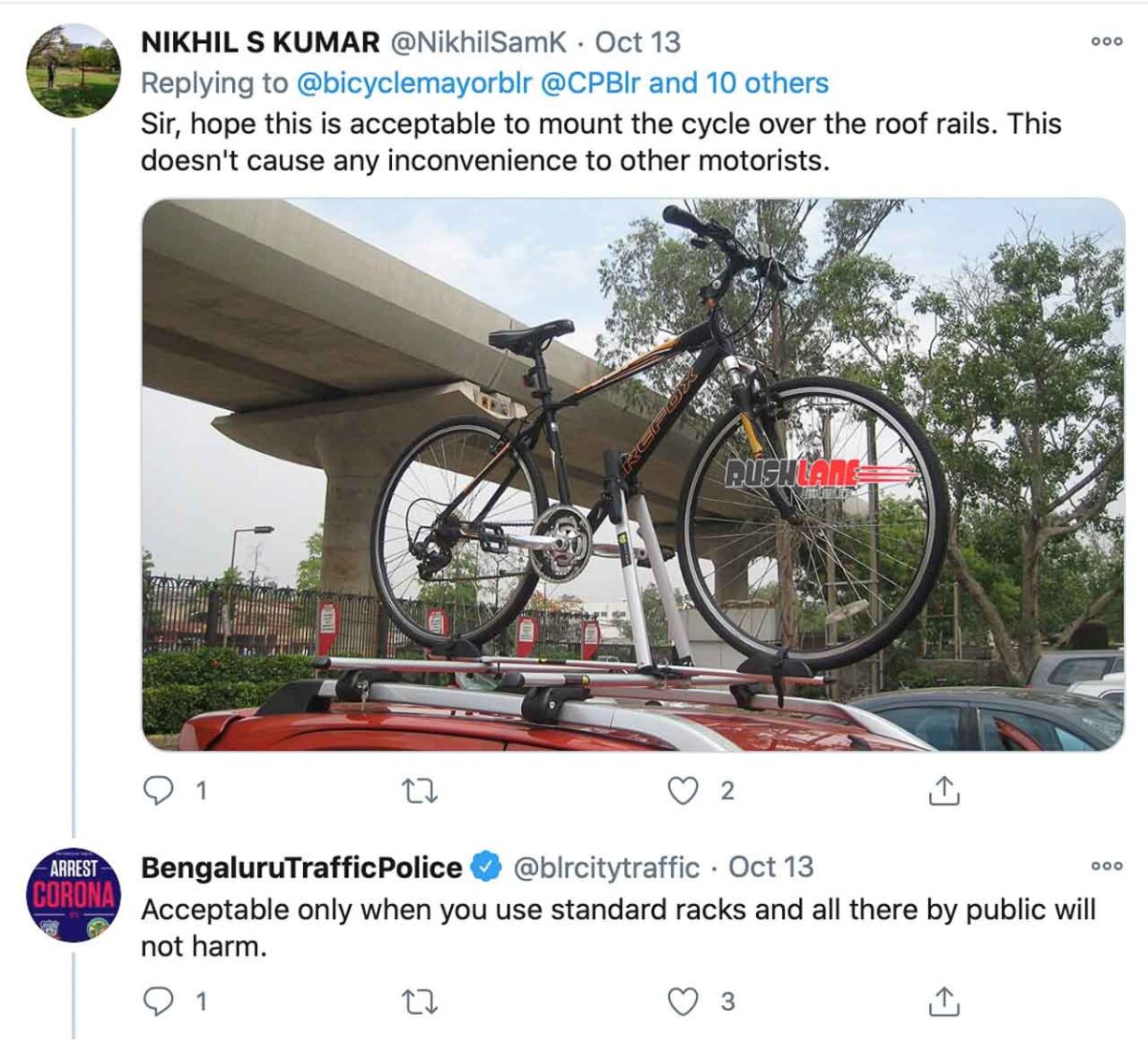 However, despite these arguments in favour of carrying cycles on racks attached to cars, the Traffic Inspector in Bengaluru continues to view this as a violation. He states that the police have the right to fine violators upto Rs.5,000 unless they have an RTO certificate permitting them to alter the vehicle.

He cites an example where cycles have been fixed to the doors and could cause an accident if the door is suddenly opened. This occurred at the Hebbal flyover causing minor injuries to a passing motorist. It seems as the only way to avoid paying the hefty fine is for avid cyclists to get the required permission for the extra fitting and written document from the RTO.