Two bikes from CF Moto – 650 NK and 400 NK will be making their official entry into India sometime soon. The company was earlier spotted testing the CF Moto 250 NK naked street bike and the 650 MT adventure tourer, while this time round the 650 NK and 400 NK were taken out for testing.

CF Moto had earlier announced its Indian debut in 2016 along with Eider Motors of Hyderabad. However, scams with dealers and arrests followed, making the Chinese brand take a retreat. Now, three years later the Chinese bike makers are back in India via new partners. 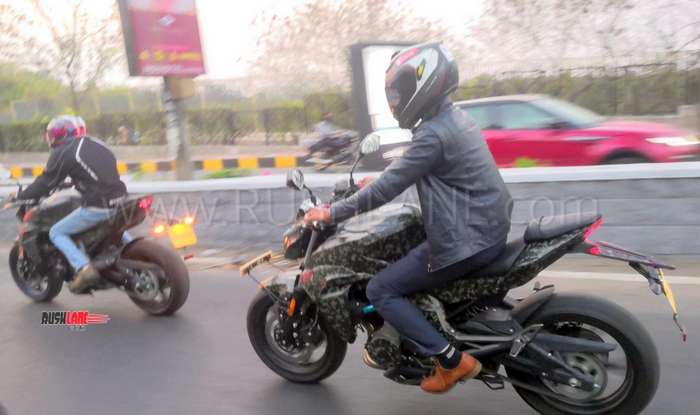 Already on sale in many countries, CF Moto 650 NK features LED headlamp, a full digital instrument cluster, LED tail lamps and 17” alloy wheels fitted with 120/70 R17 front and 160/60 R 17 tyres at the rear. It will be powered by a 649.3 cc engine offering 60 PS power and 56 Nm torque mated to a 6 speed transmission offering top speed at 180 kmph. Suspension will be via telescopic front fork and rear monoshock while braking will be through twin front disc and single disc at the rear with dual channel ABS. Once launched in India, the CF Moto 650 NK will compete with the Kawasaki 650 and KTM Duke 790 in its segment.

CF Moto 400 NK, on the other hand, is a street naked bike that will be positioned between the 650 NK and 250 NK. Spied on test along with the 650 NK, the 400 NK was seen with similar LED lights at the front and rear and a fully digital instrument cluster. It gets a diamond steel frame which results in kerb weight of 206 kgs along with a larger fuel tank of 17 liter capacity. The 400 NK will sit on CST tyres measuring 120/70-ZR17 front and 160/60-ZR17 rear.

It will be powered by a 400.4cc, parallel twin, liquid cooled engine offering 41.4 hp power at 9,500 rpm and 34.4 Nm torque at 7,650 rpm mated to a 6 speed gearbox. Suspension is via 41mm telescopic fork in front and monoshock at the rear while braking is via 300mm twin disc in the front and single disc at the rear. ABS will be offered as standard. Its competitors in the Indian 400cc motorcycle segment will include the Kawasaki Ninja 400.

AMW Motorcycles from Bengaluru, set up in September 2018, is actively testing the bikes from CF Moto and is poised to set up an assembly line to assemble these bikes in India which will come in via the CKD route.