Some Chinese car makers are infamous for copying designs of popular cars, and selling them for cheap

‘Imitation is one of the sincerest form of flattery’, they say. However, at some point of time one needs to draw the line too? Right? Or maybe not. Well, we bring to you a short story on one of the closest imitation of the Jeep Wrangler we have ever come across (no, we are not talking about the 2020 Mahindra Thar).

BAIC is a Chinese automaker and has now launched an SUV in Pakistan; which it calls BJ40 Plus. If you would prefer, you can take the liberty of calling it a Chinese Wrangler. Pakistani YouTube channel, PakWheels.com has uploaded a new walk-around video of the BJ40 Plus which showcases all details of the SUV, ahead of its launch in Pakistan.

If you were to look at the BJ40 from the side or the rear, there are high chances that you would consider that it is actually a Wrangler. If you were to check out its front facia, you might assume that someone has done a shoddy job at customizing their own Wrangler. Overall, the exteriors are very similar to that of the Wrangler. The design theme on the inside too seems to have been heavily inspired from Wrangler’s minimalist-rugged theme.

What’s not in Common?

Well, for obvious reasons, there is no ‘Jeep’ logo at the front or on the steering wheel. The front is grille and bumper design is also different, but not something which is very pleasing to the eye. Additionally, under the hood, the powertrain components will also be different.

Just like the Wrangler, the BJ40 comes along with soft-top and hard-top options. The hard top can also be removed in minutes and the SUV can be used for typical outdoorsy stuff, like a Jungle Safari.

The video showcases how to open the hard top of the BJ40 and also shows how the SUV looks like, without the hard-top. The video presenters add that even the doors of the SUV can be removed, however visual details of such a setup have been missed out. 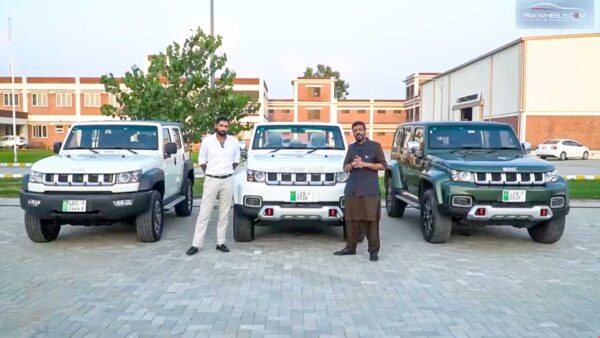 The cabin seems plush as it has been loaded with multiple creature comfort features. It gets a floating touchscreen infotainment unit, an all-digital instrument cluster, roof mounted speakers, touch-button start-stop functionality, electric parking brake (in the AT version) and much more. Interestingly, the air-con vents include BAIC’s logo in their design, which is a clever touch, we can’t deny.

BAIC will be bringing in the BJ40 with 2 engine options, a 2 litre turbocharged petrol and a 2 litre turbocharged diesel motor. To add to its off-roading capability, it will also get a 4×4 set-up. Video presenters mentioned that BAIC will be launching the BJ40 first with a petrol motor which will get an AT and later introduce the BJ40 with a diesel motor which will get a 6-speed MT.