The French automotive brand recently revealed its plan of entering the Indian market with the launch of the C5 Aircross SUV. The car has already been spotted testing on Indian roads on more than a couple of occasions. Now, another product from Citroen has been spied testing here in India.

The car in discussion here is the Berlingo which is a family MPV. It is a typical European style MPV which has a trademark boxy style and other signature styling elements from Citroen such as the grille and a split headlamp setup as shown in the spy images. The MPV is offered in two configurations- standard and XL. The standard variant measures up to 4.4 metre in length whereas the XL variant is slightly longer at 4.75 metre.

In terms of size, the regular variant is about the size of Maruti XL6, whereas the XL variant is the size of Toyota Innova Crysta. It is possible Citroen is testing the Berlingo to offer a MPV in the future which could take on these popular MPVs of India. Ofcourse, Citroen being a premium brand, the Berlingo will offer a lot more creature comforts. 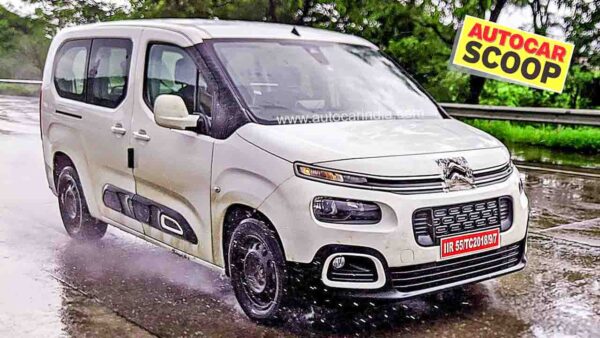 The Citroen Berlingo received a new generation last year and is sold in many parts of the world especially in Europe. The latest generation of the MPV is built on a completely new platform which is said to be a combination of PSA’s new EMP2 architecture and the older generation architecture. The car seen in the images is probably the XL variant of the MPV.

The Berlingo XL is a seven-seater MPV with bench seats on offer for the third and middle row. Buyers also get the option of captain seats for the middle row. It is also offered in many countries as a rebadged car under different brands of Groupe PSA like Peugeot Rifter and Opel Combo Life among others.

Berlingo MPV is offered in two sets of powertrains– a 1.2-litre petrol unit and a 1.5-litre diesel unit. Both these powertrains are offered in two different states of tune each. The 1.2-litre turbo petrol 3-cylinder unit generates either 110 hp or 130 hp of power. Similarly, the 1.5-litre DV5 diesel unit pumps out either 100 hp or 130 hp. Transmission duties are carried out by an 8-speed torque converter automatic gearbox as standard with the option of a 6-speed manual with the diesel engine.

It is yet to be known whether Citroen is actually planning to bring the Berlingo to India. It might very well be the case that the company is using it as a testbed for its architecture, suspension setup and engine for its upcoming made in India products.

Citroen will launch its first product- C5 Aircross SUV in the first half of next year. Initially, it will be brought in as a CKD unit. The company has already commenced its trail production a month ago. It will be followed by a sub-4 metre compact SUV, codenamed C21 which is expected to make its way to India sometime in the second half of next year.