Images of a brand new Maruti Dzire which was reportedly damaged by a dealership driver has gone viral on social media. As per Ashish Menon, who posted the photos on Facebook, states that the accident took place because an autorickshaw driver took a sudden U turn. But the images shared, seem to say a different story.

As per another reader, who was at there at the time of the accident, says that it was not due to a sudden U turn, but because of a head-on collision between the new Maruti Dzire and the autorickshaw driver. 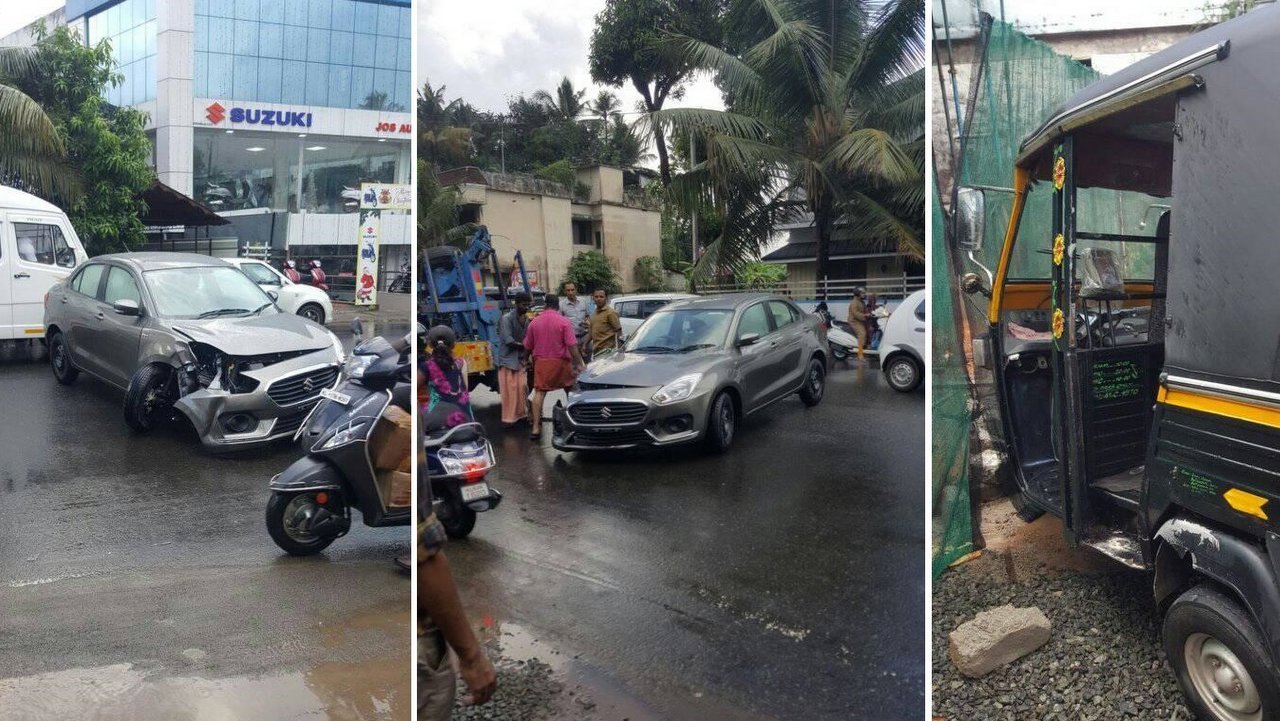 The reader says that it was raining heavily when the accident took place. The roads were wet, and visibility was not at its best. In such conditions, the auto driver was travelling at high speed. On the other hand, the dealership driver was getting the car from yard to the dealership, for giving delivery to customer who was inside the showroom at the time.

In all this, the auto driver misjudges his overtaking manoeuvre and crashes into the front right side of the Maruti Dzire. He tried to make a sudden left move, but it was too late. The speed of the autorickshaw was such that after colliding with the Dzire, it went into the side of the road, and into a under construction building, where it collided and came to a stop.

As for the Maruti Dzire, its front right side was badly damaged. The headlight assembly, bumper and wheel had come off due to the high speed impact of the rickshaw. The driver of the car escaped without any injuries as the crumple zone of the car made sure minimum impact is transferred to the cabin. And as it was not a major impact, the airbags were also not triggered, saving the interiors. On the other hand, the auto driver fell off the vehicle due to collision. He was injured and was taken to a nearby hospital.

By the time the news reached dealership, where the customer was waiting, he was perplexed as to what will happen next. But his problem was solved in no time as the dealer promised to offer a brand new car as replacement.

Being the leading car maker in India, Maruti Suzuki is not only setting new benchmarks in sales, safety and quality, but also in customer satisfaction. There have been cases where dealers of other brands have tried to sell damaged old cars as new. Speaking about new Maruti cars, all their new generation cars which are sold in the market today, offer dual airbags and ABS as standard, making it the new industry standard as far as car safety is concerned.