Both born out of the same traditions typifying the overwhelming passion for style and innovation in the automotive space. And both be right there on that elusive wish list of automobile enthusiasts. Though owning a Ferrari is more of pipe dream- possessing a Ducati is still an achievable aspiration. While a few years back the pricing of Ducati motorcycles was perched high in the affordability spectrum putting it out of reach of enthusiasts who yearned for a piece of Italian engineering- but in recent times with Ducati having forayed into segments where they offered scaled down variants of their high performance machines, it has never been easier to own a Ducati motorcycle. The new Ducati Monster 797 is one such offering from the Bolognese manufacturer that brings the brand closer to Ducati dreamers. 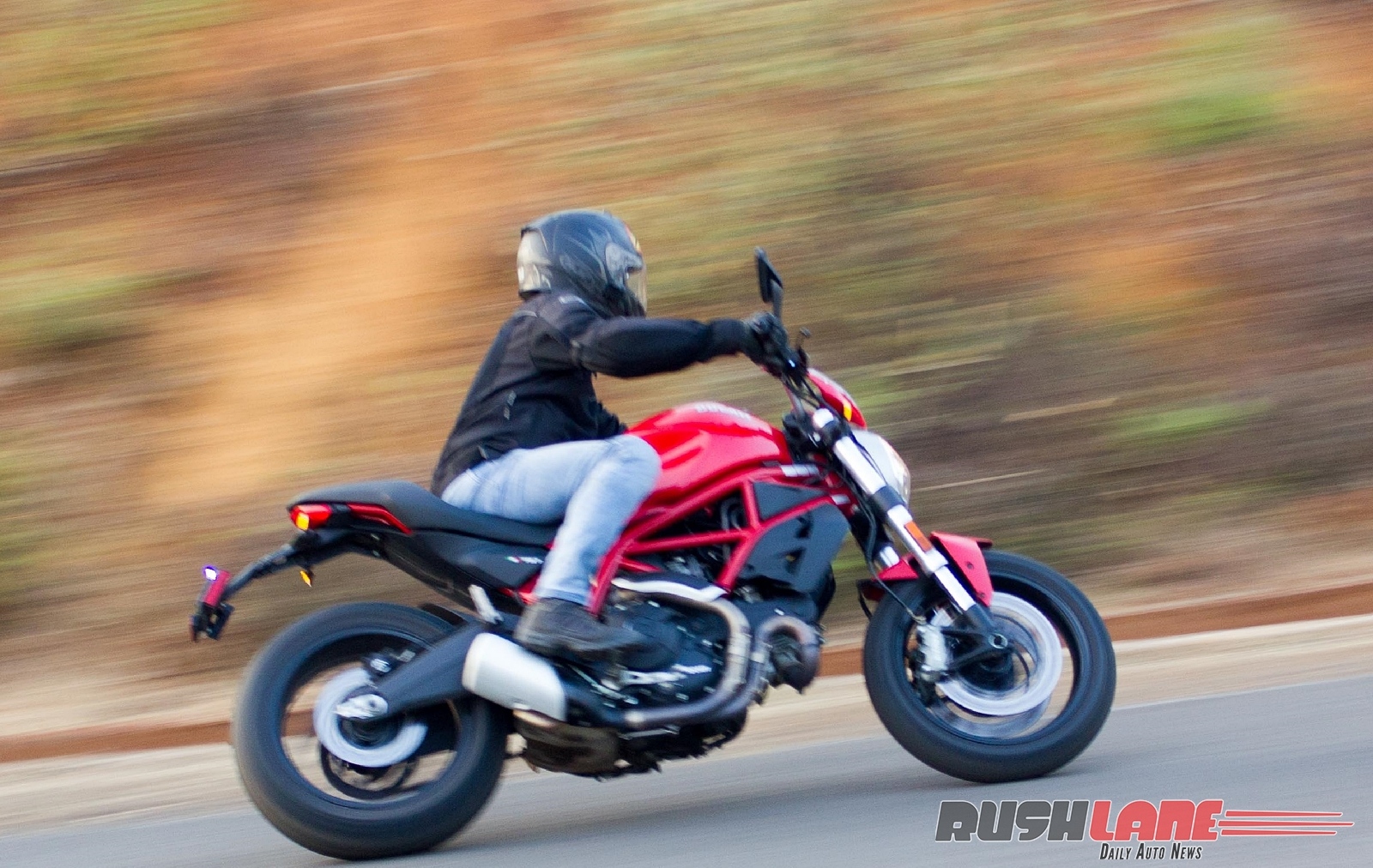 The Ducati Monster was once referred to as “organized chaos” by enthusiasts- but to admit I was never a fan of the Monster. I loved motorcycles which had a flow of continuity in their design- and the Monster as its name suggest never belonged to the clan of sane looking machines. But things seemed changed. Not that the motorcycle has lost the visuals of its predecessors, but the theme seems more in control now- rather proportionate making it a very likeable motorcycle. 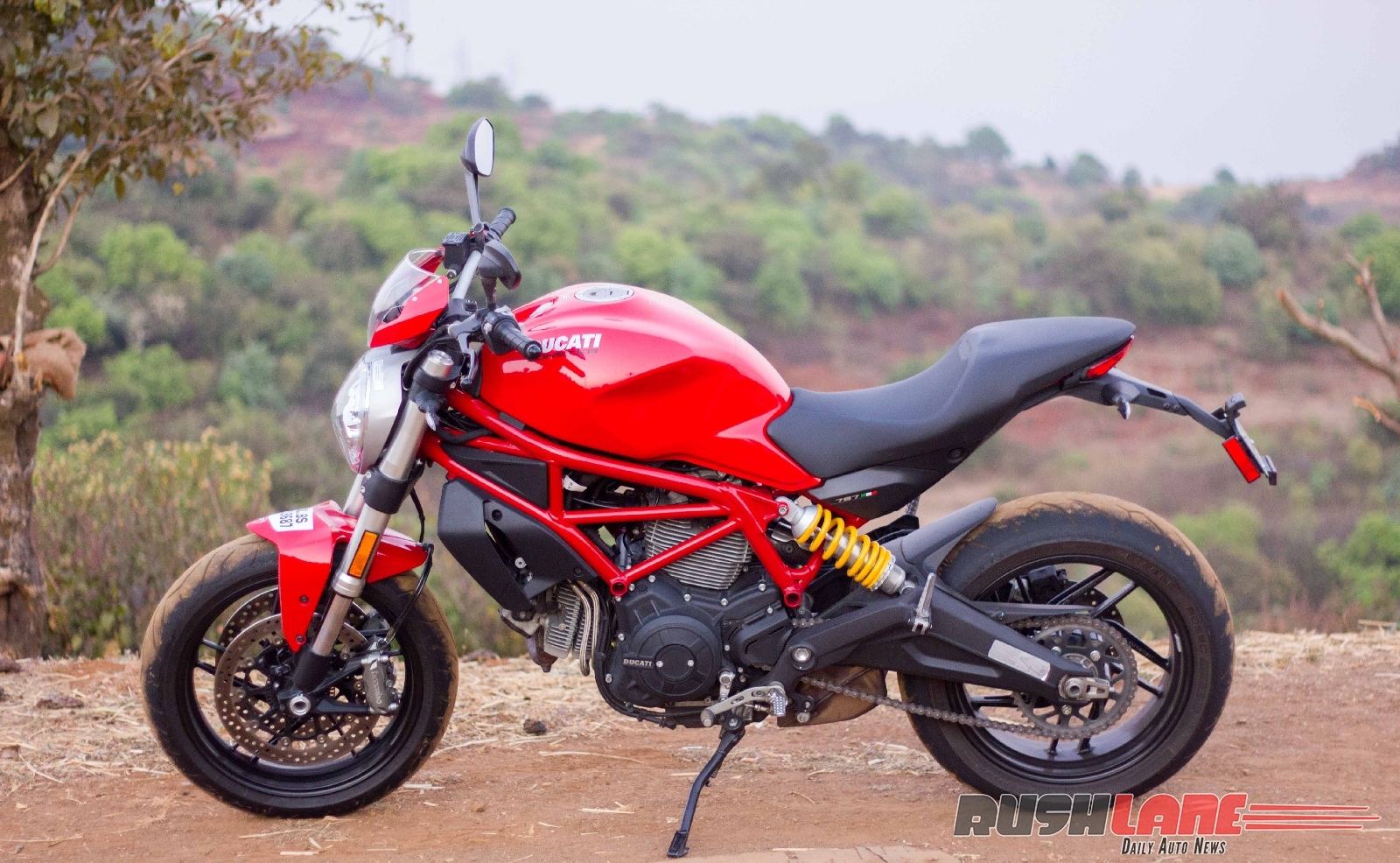 The new Ducati Monster 797 is a torquey compact motorcycle and though it might not have earth shattering force from its Scrambler swapped motor- it is more than a handful for its habitat. 73 bhp and 67 nm of torque on the street don’t seem to be big numbers but overall the Monster cranks out ample grunt to plaster a smile on your face when you whack the throttle. Swing a leg over, and couple of 100 meters is enough distance for that rider-connect to the machine. The compact dimensions, a cozy saddle with perfectly placed wide handlebars and rearsets make for a relaxed and natural slip into the motorcycle. For a 5.8 feet’er like me- the ergonomics on the Monster felt tailor made and adds to the joy of riding be it through hustling streets or a deserted highway. 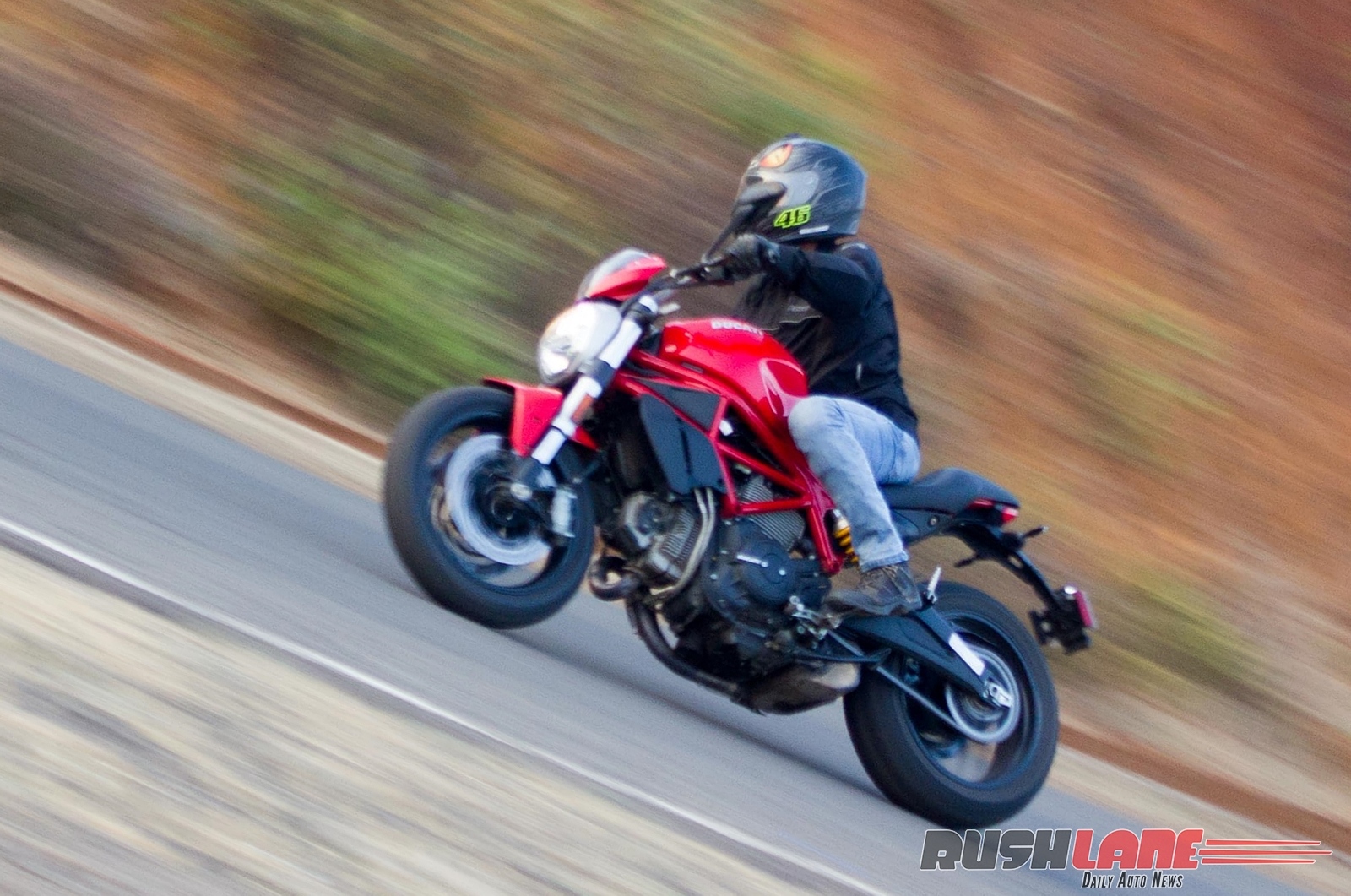 The Ducati Monster 797 was subjected to tests under every condition possible. Crawling through traffic snarls and squeezing out of narrow lanes trying to find my way, to the open blacktops towards Kolhapur and finally having fun on the snaky twisties of Lavasa- the Monster exhibits versatile capability. The engine feels refined for an L-Twin and though you feel the vibes while laddering up the rev-range, it’s rather a pleasant feeling and more of the motor flaunting its grunt. Power delivery is smooth and you won’t find flat spots across the rev-band. 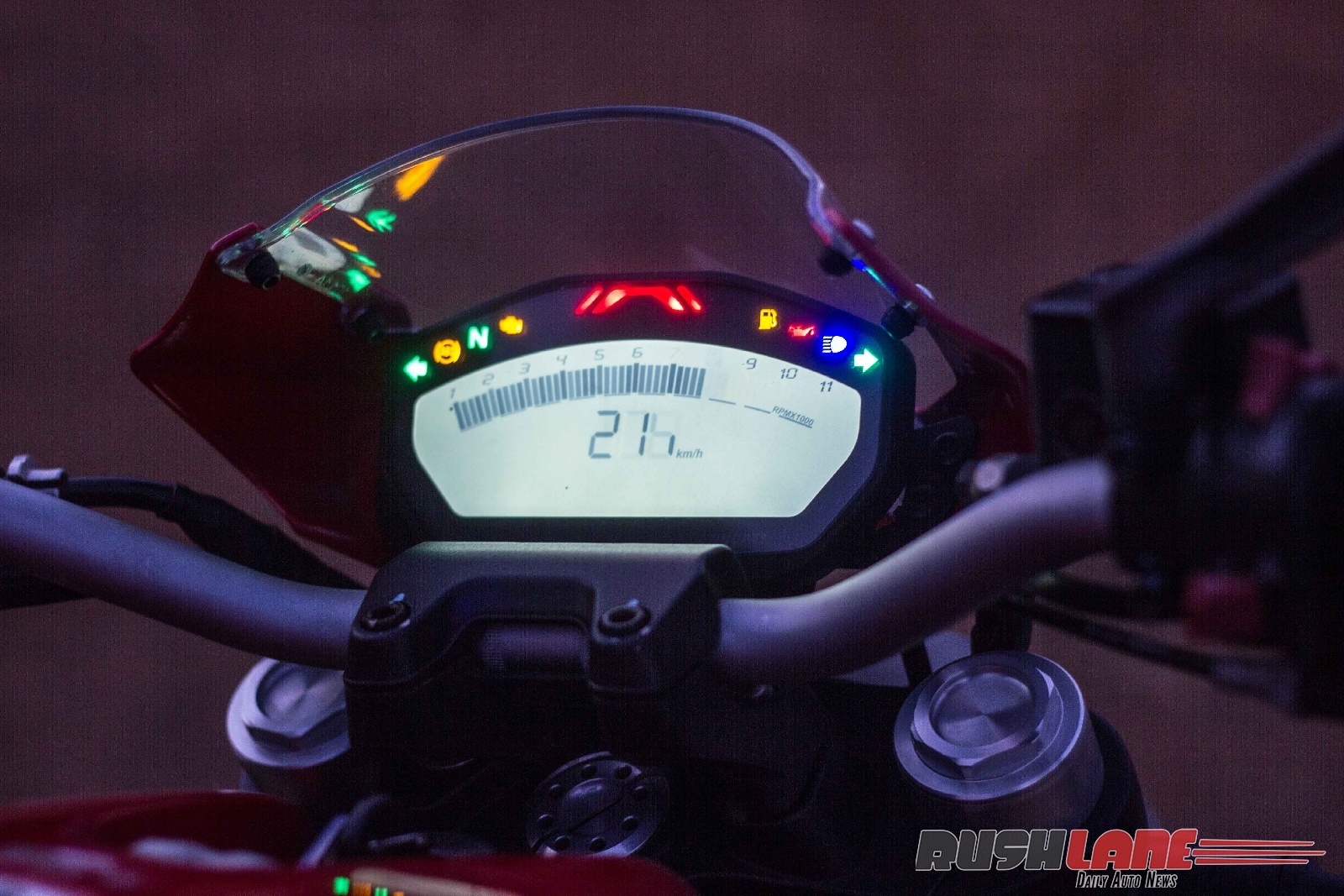 There is enough juice on offer past 2000 rpm and the linear power delivery refrains from ringing any sort of alarm bells for new riders. Though not snappy but there is this surge post 5000 rpm setting the Monster in mood to have fun. The motor didn’t at any point feel like running out of steam and even while recording a top whack of 199 kph- the only limiting factor to go any faster was the wind blast. The motorcycle did come fitted with a flyscreen but way too tiny to contribute at those given speeds. The drag feels controlled till 120 kph- anything above and you’d want to be in a ducking posture behind a larger screen. The gearbox is smooth though the only occasional chink was slotting into neutral. Engine heat felt well under control and never seemed to barbeque my legs which I was initially expecting from an air-cooled unit. 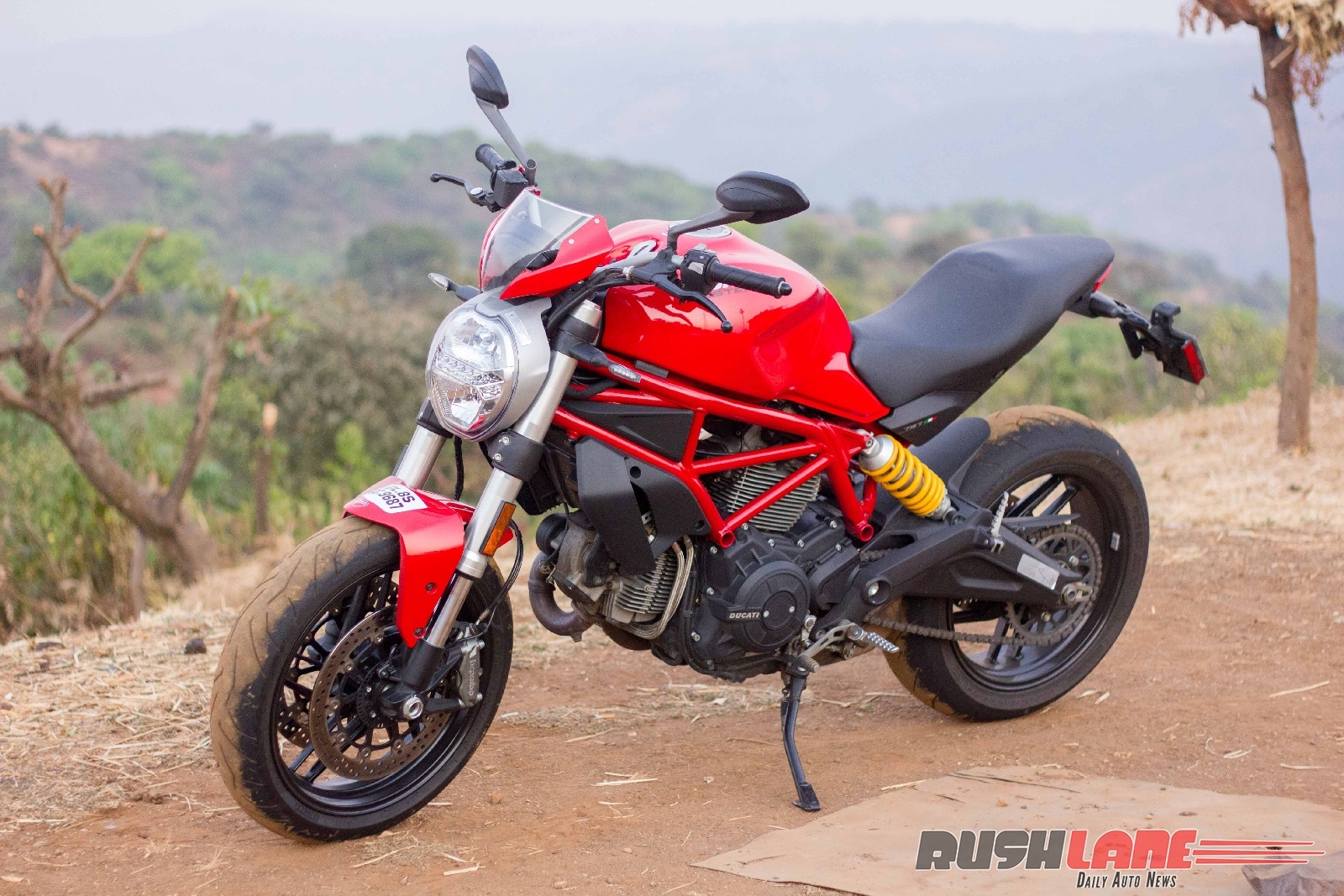 The perfectly placed anchoring points offered an exceptional comfortable ride- but as long as the roads are smooth. The non-adjustable 43mm Kayaba inverted forks and though-non-linked-yet-gorgeous looking Sach’s side shock lend a planted ride to the Monster, the stiff settings ruffle you up while tackling undulations. But on the positive side it feels neutral and composed into the corners- there is no wallow during abrupt mid corner braking or while going over rumbling surfaces at lean angles. Unfortunately the Pirelli Diablo Rosso II tyres didn’t feel as grippy into corners as they did while riding and under hard braking. I could feel the rear slide out while pushing it around the bends. 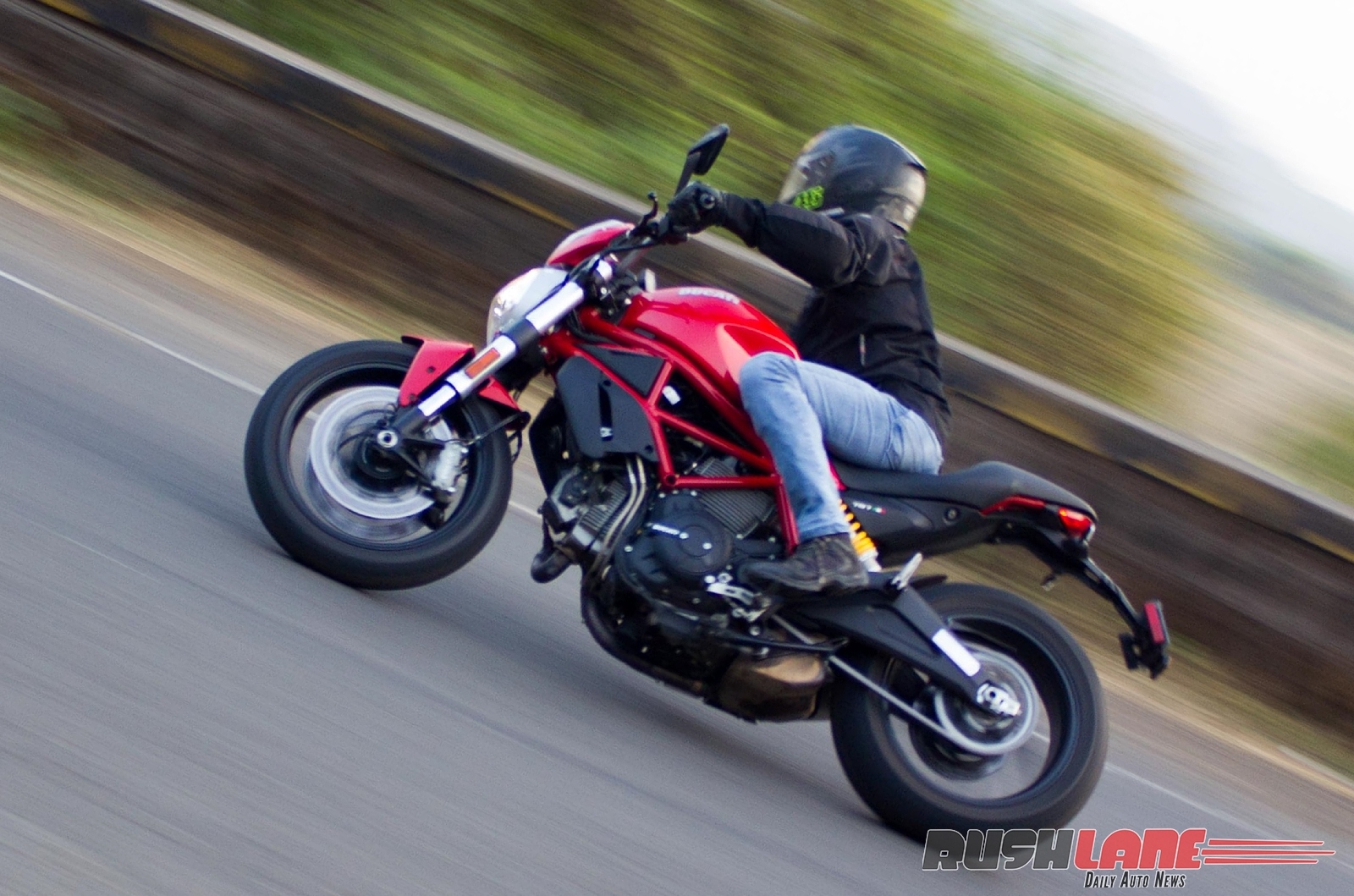 The Monster feels taut, light and effortless when shifting weight to either side- but the tyres wouldn’t match up. I’d give the benefit of doubt to the abuse the tyres might have been subjected to. The media bike had racked up enough kilometers with the tyres being close to their end of life date. But overall the Monster 797 offers great balance under all riding conditions. The braking unit is impressive offering exceptional stopping ability to the motorcycle. The dual Brembo 320mm discs with radially mounted monobloc calipers would shed speed in a hurry if needed or breeze the Monster to a complete halt in minimal stopping distance. There are no hints of drama or situations where the motorcycle feels overshooting the stopping point. The Bosch 9.1 MP ABS system comes standard as a safety net under tricky braking conditions and is the only electronic aid available on the motorcycle. 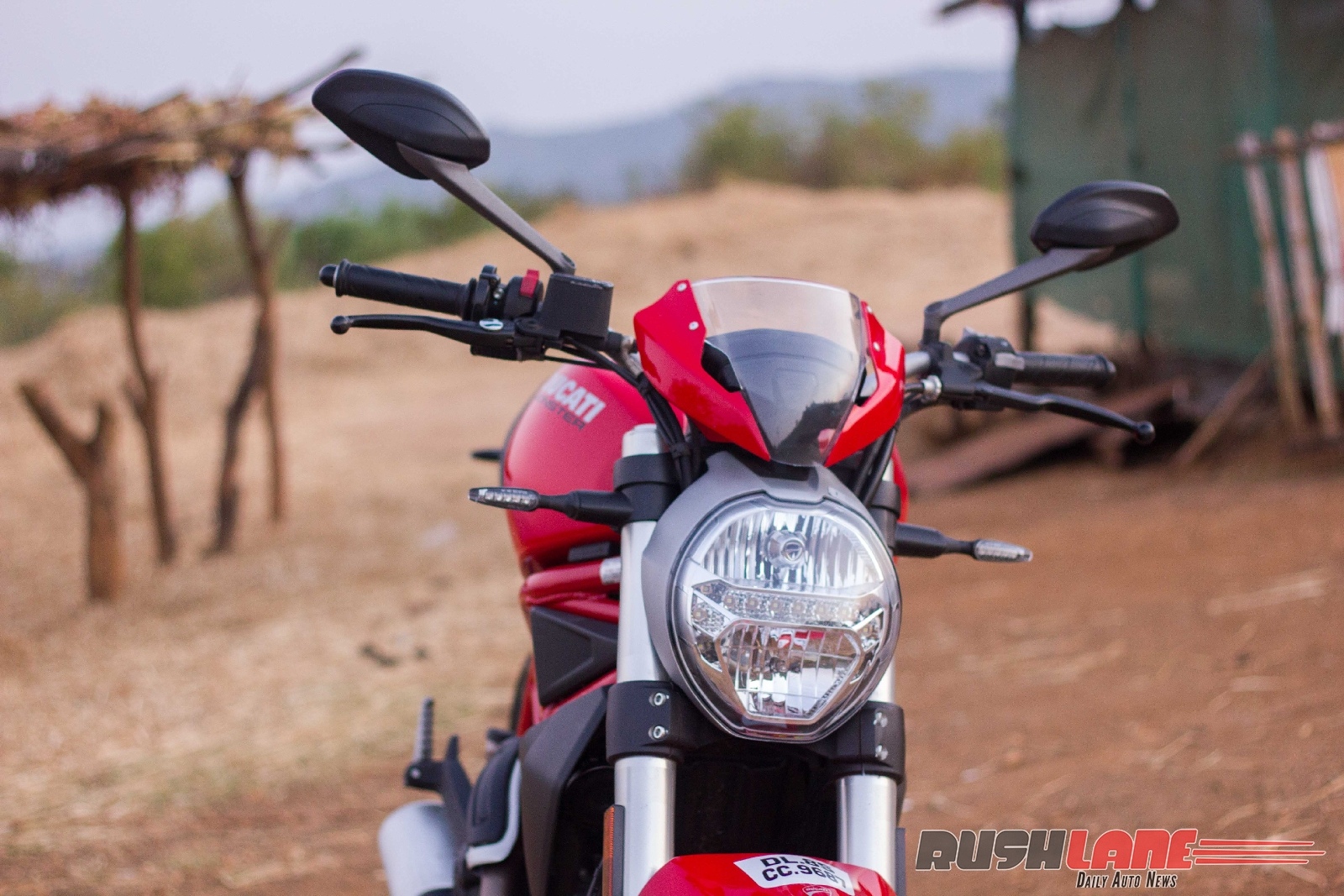 Overall the Ducati Monster 797 I’d say is one sweet all rounded package and it always put a smile on my face every time I would hop atop. Though an entry level Ducati, it’s hard to find any compromised bits. Build quality is as top notch as you can expect from an iconic manufacturer and every equipment offered on the motorcycle is top drawer. The Monster 797 is a befitting step up for someone scaling up to a big bike even from a 250cc motorcycle. The versatile trait that the Monster 797 offers alongwith the non-intimidating rider friendly proposition that makes it for a compelling consideration. And the ecstatic emotion of owning an exotic Italian brand under your belt- it alone compensates for more than half the money you paid for. Prices start at INR 8.03 lacs ex-showroom. 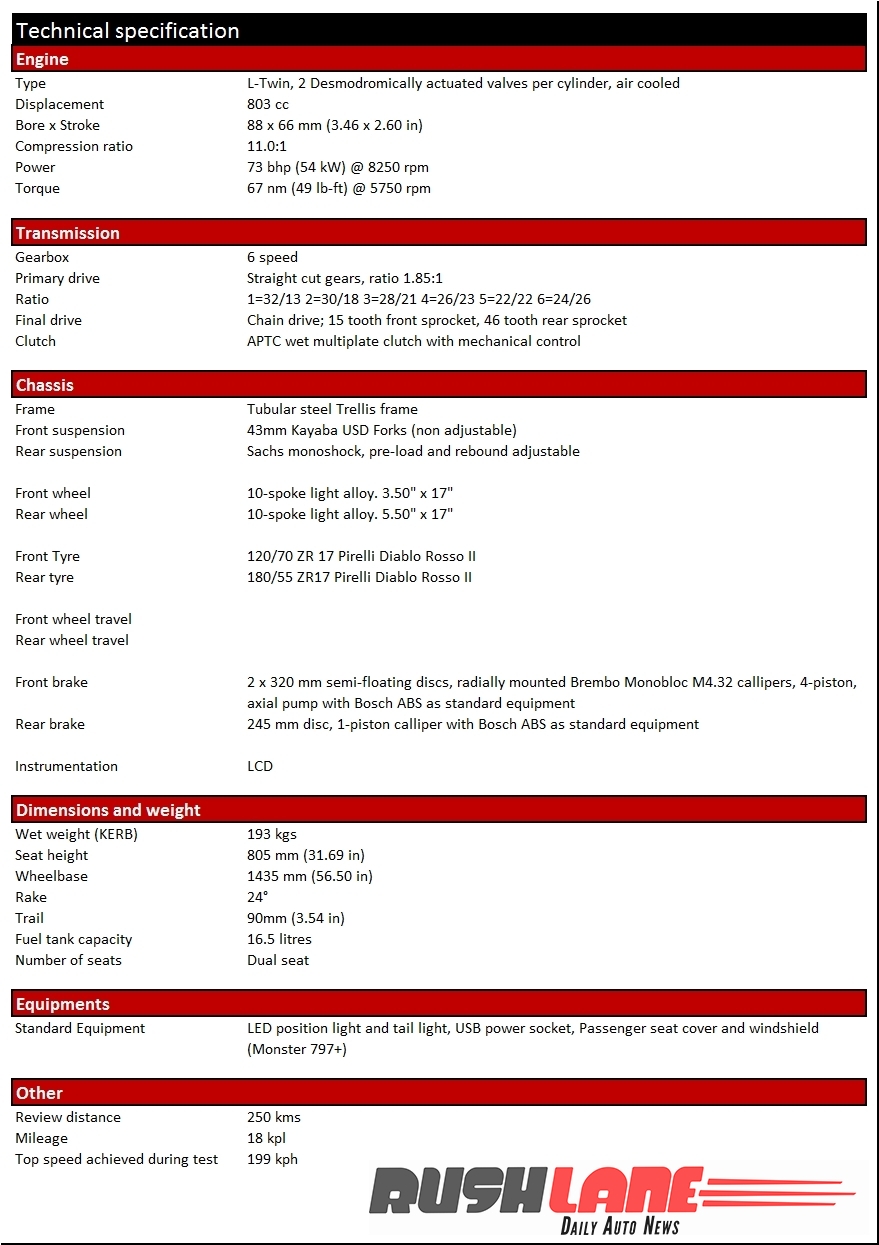