Reminisce a touring machine from the famed Italian marquee and Multistrada is the name that strikes first. Unlike major manufacturers who cater to the touring fragment with multiple offerings with cruisers, sports tourers and adventure motorcycles- Ducati has an established yet a single name on offer. But with the Ducati Supersport S, it tries to address this very deficit offering one gorgeous looking machine that’s comfortable, easy going and an absolute cracker to ride.

Having borrowed heart from the Hypermotard which also propels the Multistrada 950- the 937cc Testastretta L-twin engine, pumps out a respectable 110hp @ 9000 rpm and 93nm of torque @ 6500 rpm. The numbers might look far from shattering from this Panigale lookalike- but considering 80% of twisting force being offered around 3000 rpm- it does make the Supersport S a thoroughly enjoyable motorcycle to ride. With three ride modes to choose from i.e. Urban, Touring and Sport- the Supersport S would offer you the maximum kicks in the harried Sport mode. The Touring mode offers full power but in a steady pattern with the conservative Urban mode handy to move around the bustling streets. 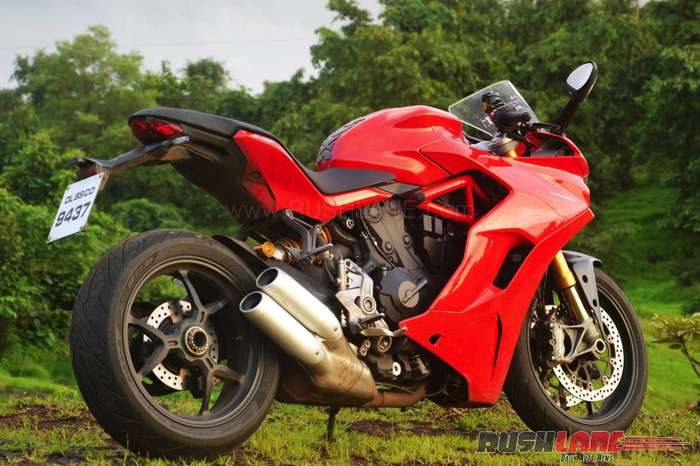 Styling brims of eye-candy and though not appearing as exquisite as the Panigales in pictures, stare it in the flesh and the Supersport S would get you desirous to own one. With the frontal half wrapped with aero and the rest left to bare its muscle- the Supersport looks zealous even while standing still. The LED DRLs add glamour and look striking when it starts getting dark. The big tank, one sided swingarm and the lateral twin-barrel exhaust augment the brawny appeal.

Overall it’s a good feeling to ride the Supersport around- not only does it feel as keen as a sportsbike, but the motor offers a spectrum of usability under all riding conditions. Being a big bike, the front does convey a cumbersome visual, but hop onto the saddle and acquaintance happens right from the word go. The raised clip-on placement aren’t too taxing on the ergos and thought the steering angle might not be as liberal- but still makes for an easy low speed maneuvering machine. 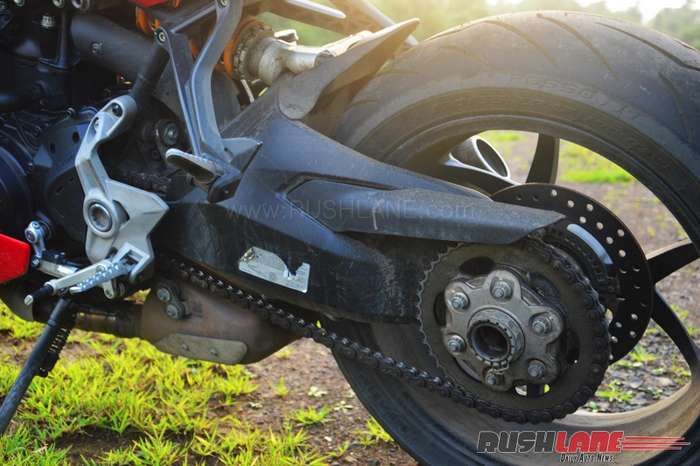 It feels revvy particularly in the sports mode delivering oodles of rush when needed. With 100 kph comes up at 4000 rpm with 120 and 150 kph at 4900 and 6000 rpm respectively- the Supersport never feels starved of power even in top gear while closer to the 200 kph mark and beyond. The motorcycle feels rock steady slicing through the wind and if needed the Brembo Monobloc M4-32 sheds momentum in an overwhelming manner with just one finger squeeze. Engine heat does start to get discomforting when confined to crawling speeds with the motor stuttering below 2000 rpm in first gear inviting frequent clutching to avoid stalls.

There are vibrations below 3000 rpm something that’s obvious from longitudinal twin motors- but once past, the revs fall back into a uniform rhythm. The gearbox feels slick and shifting through the transmission is a breezy affair- except the occasional hiccups of finding neutral. And then there’s the cherry topper – the Ducati Quick Shift (up\down), which we’d say has to be one of the best if not the best on any motorcycle today. With minimal effort and no drop in revs while you whack the throttle, it’ll make you hate to pull the clutch. 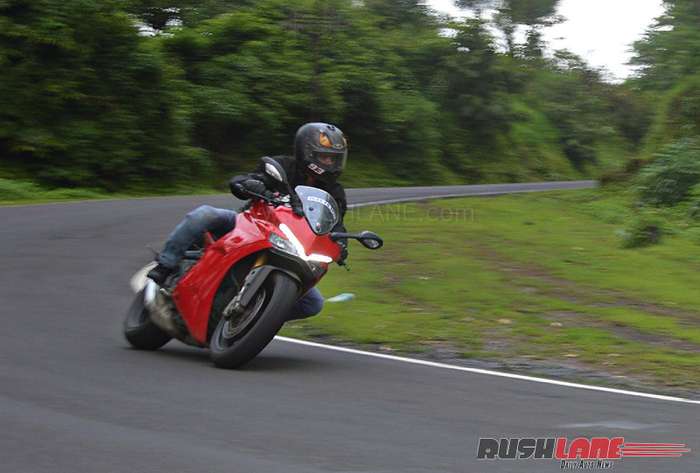 On the handling part, the Supersport S makes good use of the hardware and software it’s bestowed with. The suspension hits the sweet spot not being stiff but not overtly soft to upset mid corner adventures. It feels extremely neutral to steering inputs and the precise throttle response with ample grunt in the mid-range gives you a seamless entry and exit performance. Sticky rubber at both ends ensure the Supersport S abides by your desired line of travel. If the top notch equipment and handling traits are to be considered- the Supersport S wouldn’t do bad at all if one yearns to take it to the racetrack,

When it comes to riding comfort- the Supersport S again is nearly there with the perfect balance of being sporty and comfortable. Though not as committed as its track-frenzy siblings and neither as upright as a true-blue sports tourer, the Supersport S is a reasonably comfortable motorcycle to ride around. The suspension soaks up usual undulations and only starts to strain your joints when the going gets too bumpy. Given a good surface, you’d be well adapted to the motorcycle on a long haul without being sore at the end of the day. We also took the Supersport S to a mild offroad trail and it held itself up pretty well. The same though doesn’t hold equal for the pillion in case you wish to ferry one along. The overall bodywork with an adjustable screen offers enough shielding from drag at higher speeds. You can opt for a touring screen and cocoon yourself in case you want to speed up the numbers. 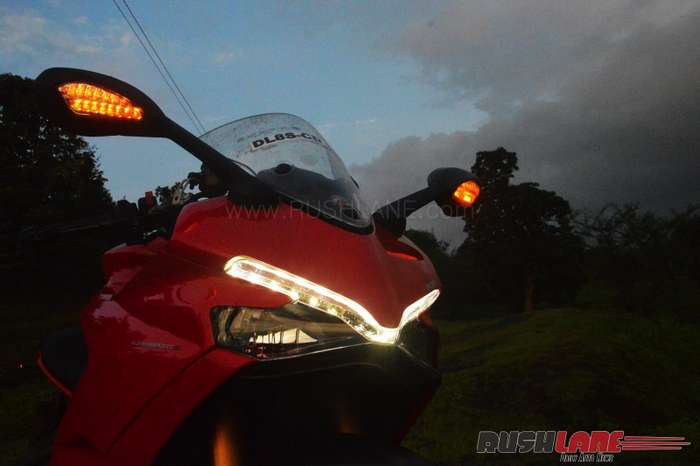 Summing it up- the Ducati Supersport S offers a near perfect unison, blending style and rush of a supersport with the comfort and tractability of a street bike. It’s an eye-ball magnet and packs enough punch to keep you satisfied on every run- just keep away from traffic. Show it a well laden highway or bunch of corners- and the joyride would muster enough smiles to plaster your face. With prices starting from INR 13,39,000/- (Ex-showroom)- what you get is the lusty Ducati design, top drawer equipment and ample grunt to cherish on prolonged endeavors without aching wrists and a stiff back.