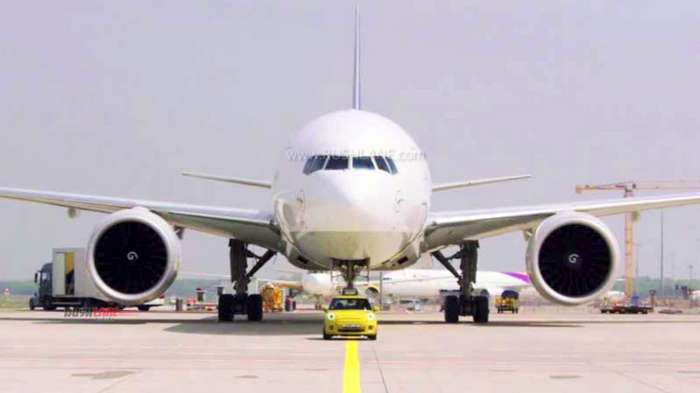 The Mini Cooper electric vehicle is not the first car to show off its torquey nature by towing a huge airplane and it certainly wont be the last. The British brand’s first ever electric vehicle is set to be unveiled in the coming months (probably even weeks) ahead of its scheduled start of production in November.

The teaser shows a camouflaged Mini Cooper electric pulling a Lufthansa Boeing 777F (F for Freight), the world’s largest twin-engined commercial jet. If you think the electric Cooper would be making mountains of torque to be able to pull the massive aircraft, how does 250 Nm (estimated) sound?

That’s about how much an average diesel hatchback produces but what makes an electric vehicle’s torque so special is the fact that it is available from the moment the motor turns its shaft.

This is also the reason why IC engined cars can seldom beat electric vehicles in the first several meters of a drag race. Evidently, the torque from the Cooper SE’s electric motor is all you need to get a 136 tonne aeroplane moving.

We expect Mini to release the video on social media anytime soon. A series of videos demonstrating the capabilities of the new Cooper SE electric vehicle would be released in a phased manner in a build up to its world debut.

Earlier spyshots reveal that the zero emission Mini retains the trademark design. The car distinguishes itself from its IC-engined siblings by means of elements like yellow accents on ORVM and redesigned grille, new alloy wheel design, etc. The interior too is expected to carry forward the design and layout from its stablemates but is likely to sport different instrument cluster and improved infotainment system.

The technical specifications have not been announced officially but we expect the electric powertrain to have a lot in common with that of the BMW i3s. For reference, the German electric hatchback produces 184 PS and 250 Nm of torque and is supported by a 42 kWh Lithium-ion battery pack. The i3s can accelerate from 0-100 kmph in 6.8 seconds and has a range of 246 km on a single charge.

The Mini Cooper SE will have Europe and the US as its primary markets. The car will be pitted against the VW e-Golf and several other new electric premium hatchbacks that are on their way to the market.