Last week, Mahindra owned Automobili Pininfarina teased the interior of its first product, the Pininfarina PF0 (codename) electric hypercar. Pininfarina’s first production car is hailed as the fastest ever Italian sportscar. It was unveiled privately to exclusive audience of prospective buyers on the sidelines of Pebble Beach Concours d’Elegance a few hours ago.

Though there is no photo of the car that is made available, this is what Mr Mahindra tweeted – “The @automobiliPinin Villa at Pebble Beach where private viewings of the 1st Pininfarina badged HyperCar are taking place. To say the reaction’s been positive would be a massive understatement! The rest of the world will have to wait till the Geneva Show to see it!”

As mentioned in the tweet by Mahindra, the global unveil of the Pininfarina hypercar will only take place by 2019 Geneva Motor Show, which takes place on 7-17 March 2019. Though Mr Mahindra has not revealed the car, there are some teasers of the car which has been shared.

From these teasers, one can see that the cockpit features a floating dual-tone dual-layer dashboard with two individual displays on either side of the squarish multi-material steering wheel. The image shows vehicle settings related information on the left display while the right display shows navigation info (will also double up as entertainment screen).

In addition to these two prominent screen, there is also a smaller display where the traditional instrument console would sit. This unit displays vital info like turn-by-turn navigation and vehicle speed. 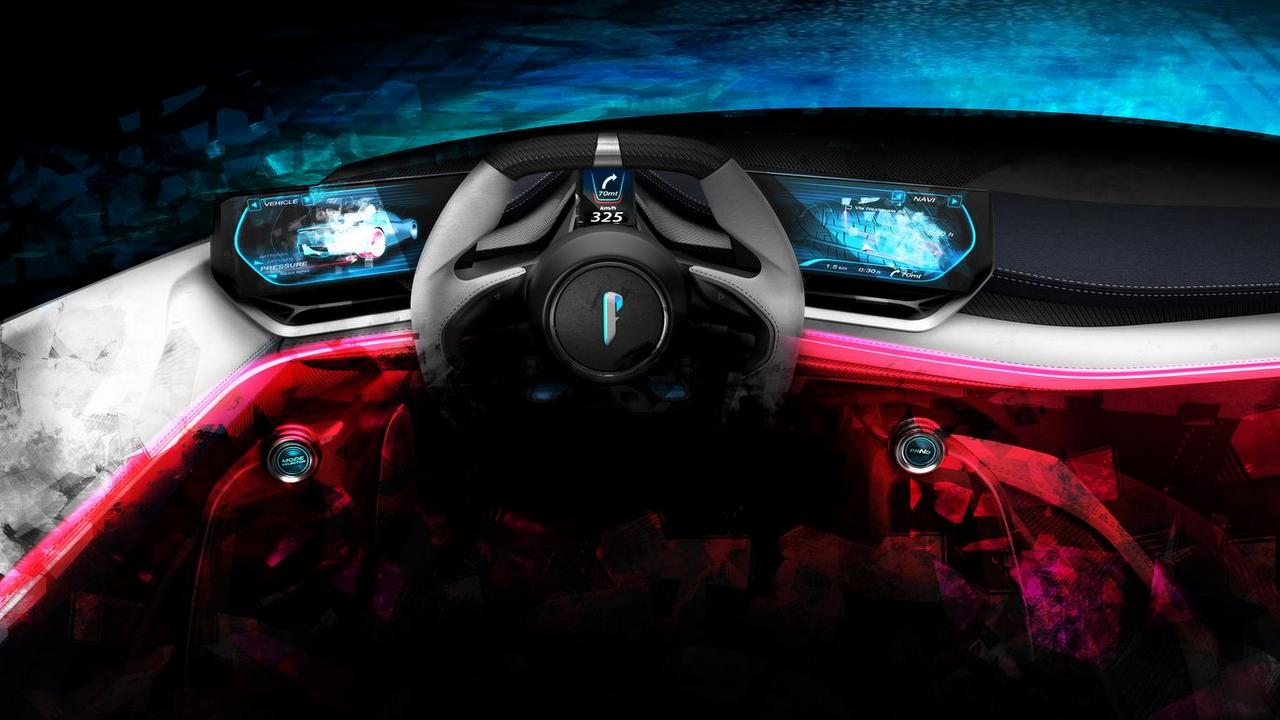 The entire suite of infotainment screens are expected to be fully configurable. The lower half of the cockpit is digitally concealed by means of a dark red shade. Only start/stop button and drive mode selector are clearly visible. Closer inspection reveals a centre console that is inclined towards the driver. Expect an uncluttered layout which complements the upper half of the dashboard.

Like any hypercar, the color theme, materials used and upholstery can be chosen from a wide array of choices. No further information about the PF0’s interior has been revealed as of now. The exterior was teased earlier through a set of sketches.

The Pininfarina PF0 will be handcrafted at the famed design firm’s Cambiano facility near Turin, Italy. The production is limited to 150 units and we expect all of them to be sold out before the official launch next year.

Automobili Pininfarina has set a very high performance level for its maiden product. The PF0 is claimed to accelerate from naught to ton in under 2 seconds before hitting a top speed of 250 mph (402 kmph). The hypercar aims to achieve a potential zero-emissions range of 300 miles 482 km.