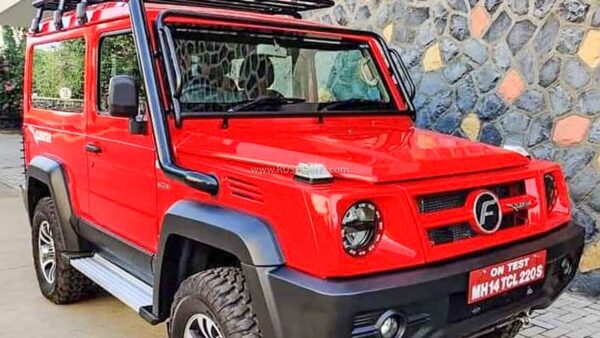 Mahindra recently launched the all-new Thar in India and has been able to garner audiences’ love from all quarters. While it took a hell of a time to reach the market, when it finally did, it managed to grab some eyeballs. Similarly, its nearest and only rival in this segment is also taking a lot of time to hit showrooms.

After being showcased at the AutoExpo 2020 earlier this year, Force Gurkha Facelift was supposed to be launched in April this year, however, the Covid-19 pandemic and the subsequent nationwide lockdown made makers defer the launch. Since then, the upcoming SUV was spotted testing on a couple of occasions on road.

Now, we have got hold of a pair of images of the updated off-roader sans camouflage which suggests that the facelifted model might soon undergo production. The images have been shot at the premises of one of the manufacturing facilities in India probably in Pune given its license plate mentions Maharashtra. The red Gurkha shown in the spied shots looks identical to the one presented at the AutoExpo earlier this year. 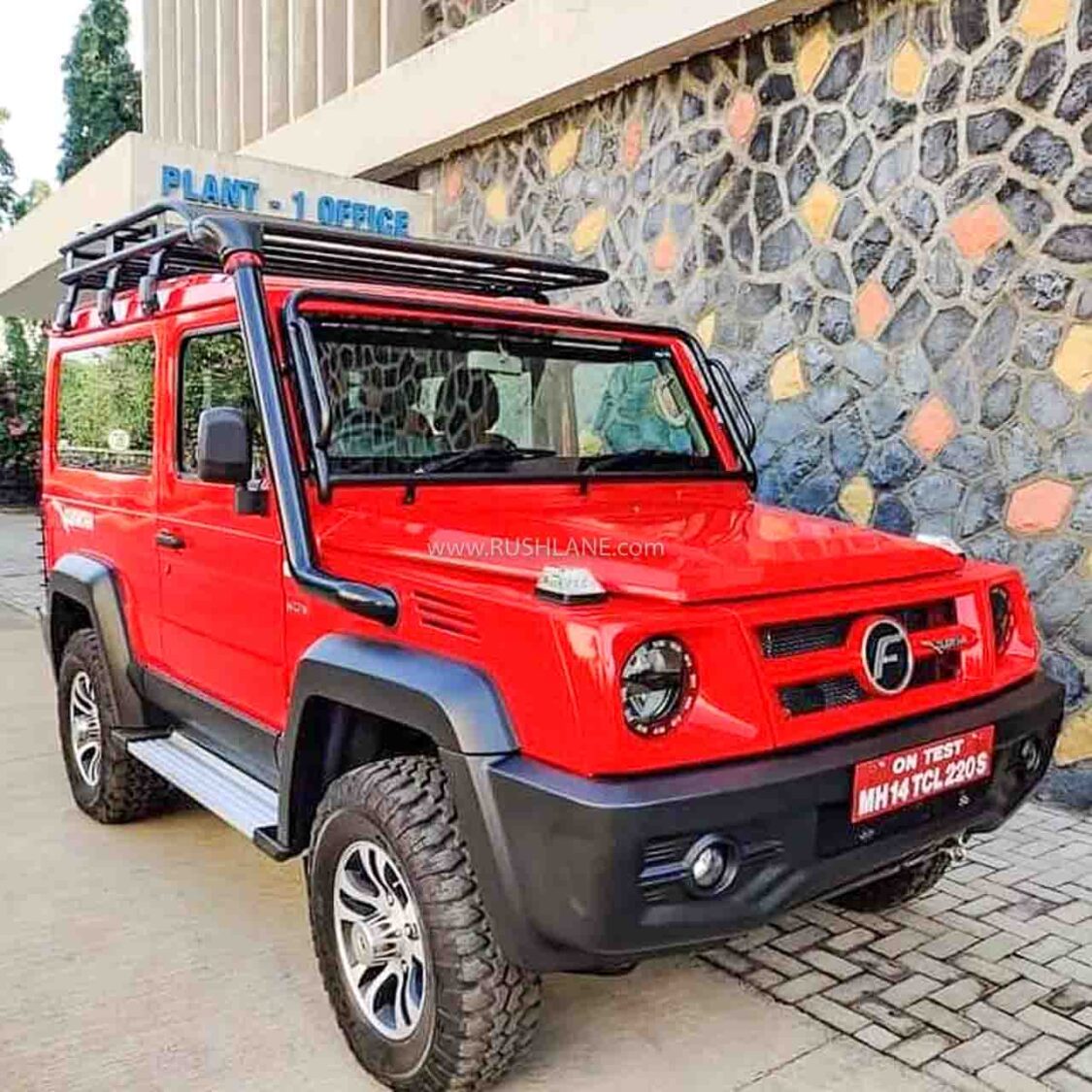 The front end of the utility vehicle has been revised with a new grille and front bumper. The resculpted bumper also gets new prominent fog lamp housings and a rectangular air-dam. It retains its signature turn indicators placed above the headlamps at the side of the bonnet along with the snorkel. It gets a new pair of bi-LED headlights with circular LED DRLs surrounding the units. Overall, the front end seems inspired by Mercedes Benz G-Wagon.

At rear, it gets a wider rear window panel at the door while the tail lamps have also been positioned vertically at the body instead of positioning it horizontally on the rear bumpers. The wheels on offer here are 16-inch alloys. It still gets its spare wheel mounted on the new tailgate although alignment has been moved toward the centre of tailgate. On the sides, one can notice the horizontal slats on the fenders for improved ventilation. It receives a single glass panel on the side as well which seems to be fixed instead of two separate panels. 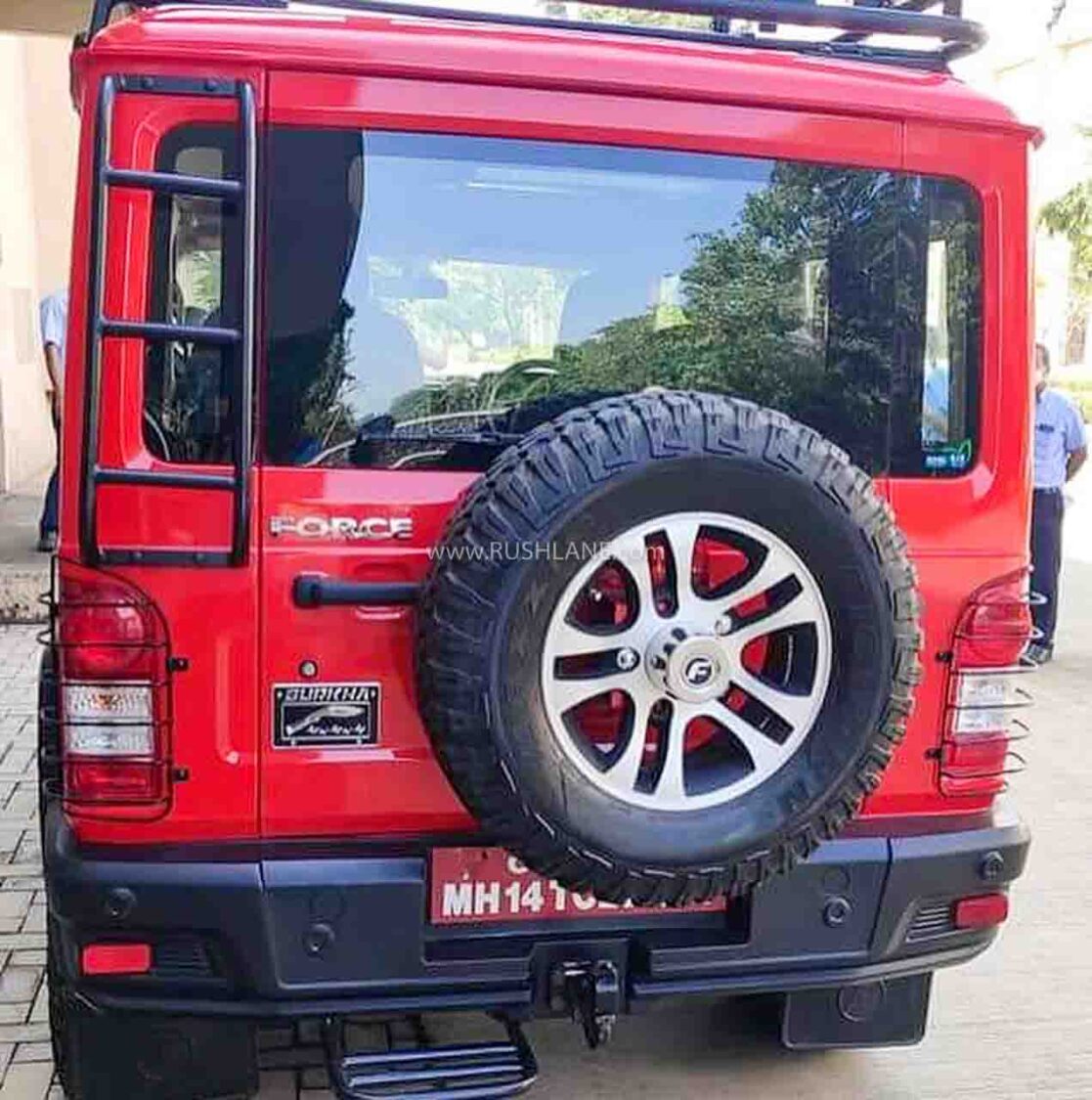 From the images released earlier, it is shown that the cabin also gets minor updates although it is still very much basic utilitarian. It gets a dual-tone theme for its interior which enhances the overall atmosphere of the cabin but it still uses age-old hard plastics on the dashboard. The layout of the dash is updated as well as new control surfaces for the air-con system and a new touchscreen infotainment system. However, the major change inside the new Gurkha’s cabin is the forward-facing rear seats.

The facelifted Gurkha still sits on a ladder-frame chassis as most lifestyle off-roaders do. It will be powered by a BS6 compliant Mercedes Benz OM616-derived 2.6-litre diesel engine that generates 90PS of power and 280Nm of peak torque. This unit will be linked to a 5-speed gearbox and a 4×4 drivetrain with a low-range gearbox. will be offered as standard.

There has been no official word from the company on its launch timeline yet but one can expect to see it in markets early next year. Like Mahindra Thar, its base price is expected to start with sub-Rs 10 lakh and go up to Rs 13 lakh (ex-showroom) for its top-spec trims.