Ford EcoSport To Get New Android Based Touchscreen – Details Leak

Ford EcoSport will reportedly come equipped with a different infotainment system from now on. The new touchscreen head unit is said to be based on Android 4.2.2 operating system (OS). The latest unit will replace the current head unit based on a Windows Fly Audio OS.

Unfortunately, the existing infotainment system cannot be upgraded to the latest Android OS since both are based on completely different platforms. The compact SUV has been losing out to rivals in the recent past and a timely update is the need of the hour. The new generation of Ford EcoSport is expected to make its international debut in 2022. 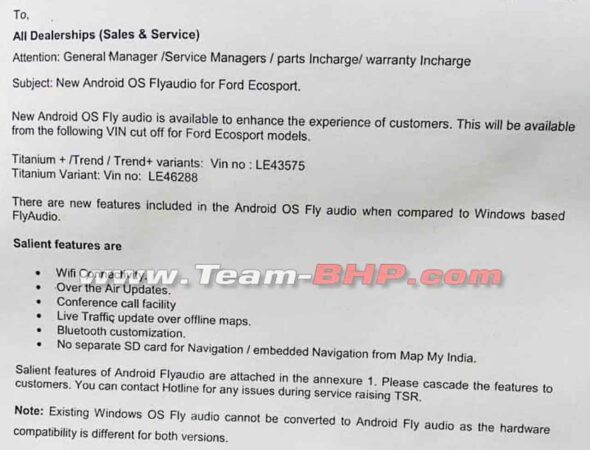 The new infotainment system comes with a host of features that include Wi-Fi connectivity, a Conference call facility, Live traffic updates with offline maps, Bluetooth customization and Over the Air (OTA) updates.

This new system doesn’t require embedding a separate SD card for offline maps. It still gets Ford’s in-car connectivity technology called Ford Pass however it still misses out on features such as Android Auto and Apple CarPlay. 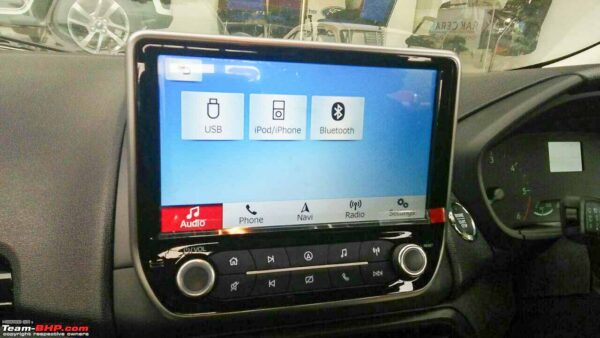 A similar setup has also been fitted in the higher-spec variants of Skoda Rapid. The said infotainment system is going to be offered in Trend, Trend Plus, Titanium and Titanium Plus trims. A notification regarding the same has been sent to all dealerships across the country.

Ford EcosSport was the pioneer of the entry-level subcompact SUV segment when it was launched way back in 2013. The sub-4 metre UV was given a mid-life facelift in 2017, however, it lost to newer entrants in this segment like Maruti Suzuki Vitara Brezza, Tata Nexon and Hyundai Venue. The competition has stiffened even more with the introduction of newer models such as Kia Sonet and Toyota Urban Cruiser. With more models to be introduced in this hotly contested space like Nissan Magnite and Renault Kiger, we can expect to see a few more updates from other manufacturers as well in the near future as well.

Ford EcoSport is offered with two powertrain options- a 1.5-litre naturally aspirated petrol unit or a 1.5-litre diesel unit. The former cranks out 122 PS of power and 149 Nm of peak torque whereas the latter pushes out 100 PS and 215 Nm of peak torque. Both engines are mated to a 5-speed manual gearbox as standard with the option of a 6-speed automatic unit in the petrol motor only.

Other Features on offer

Apart from the touchscreen infotainment system, EcoSport is offered with other features such as automatic climate control, auto projector headlamps, cruise control, a push-button start, rain-sensing wipers, and a sunroof. It is also equipped with paddle shifters for the top-spec automatic trim. In terms of safety it gets six airbags, ABS with EBD, traction control, hill launch assist and electronic stability control (ESC).