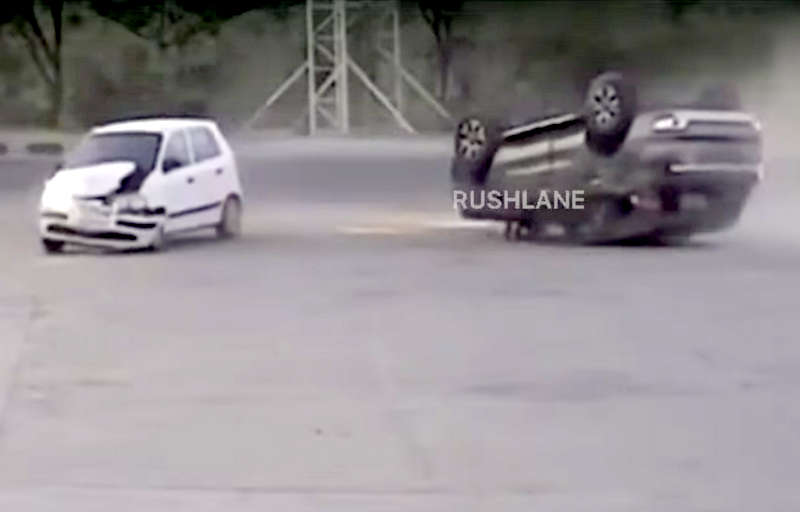 Road accidents are way too common in India, so much so that we have been topping the list when it comes to highest road fatalities for several years now. While a considerable number of those unfortunate life losses could be attributed to poor infrastructure and unsafe vehicles, there is no denying that a significant number of accidents are caused by gross negligence.

With the rising number of CCTV cameras at shop fronts, we now have a reasonably good coverage of the roads. Sometimes there cameras catch road accidents which are either atrocious or utterly ridiculous. We will let you decide which one of these categories does this particular crash belong to.

We Indians are known for being perpetually in a hurry, especially on the road. The concept of right of way is non-existent and it is always first-come-first-serve with us. Such an mentality is eventually going to land us in trouble simply because the guy driving the other car also thinks the same. It is only a matter of time before you find yourself in a sticky situation by not respecting the right of way as this Ford Endeavour driver found out.

Accident location is Morbi, Gujarat. No major injuries were reported by any passenger in either of the cars.

As you can see in the footage, the SUV was trying to cut across the oncoming lane in a bid to leave what looks like a state highway and enter a parking lot. That part of the road was straight and there was absolutely no way the Endeavour driver would have missed spotting the oncoming Hyundai Santro Xing.

And yet, the Ford, instead of yielding for the Hyundai, decided to get in the line of fire. Perhaps the Endeavour driver expected the Santro guy to break simply because the size disparity.

Well, the end result is a lesson that cannot be forgotten easily. The Santro Xing T-boned the Endeavour and the next thing we know, the premium SUV is lying on its roof. We feel sorry for the occupants of the Santro who took a hit for no fault of theirs.

Going by the extent of damage on the hatchback, the impact is not devastating but we hope they had their seat belts on. And what a narrow escape for the Maruti Dzire which almost got caught in the middle of this nonsense!

So, the next time you find yourself having to cut through the oncoming lane, please pause, watch, and go only if the coast is clear. You will save a lot of trouble for yourself and fellow motorists.