RUSHLANEDAILY AUTO NEWS
HomeCar NewsFord India cost-cutting on Endeavour? Owner finds out that his car is...

Ford India cost-cutting on Endeavour? Owner finds out that his car is missing chassis strengthening part

A new member of popular automotive forum, Team-BHP has posted an important update with the community. Calling himself as ‘AG’ on the forum, this owner of Ford Endeavour from Roorkee shared a video of his Endeavour on Youtube. He had purchased the 3.2 Titanium variant in July 2017.

Looking at one of his Endeavour videos, one of the comment came from an expert who had reviewed the same car. This is what the comment read – “Your Everest has less underbody support. Look at the video I posted at 4:15, you will see a K-truss to add extra stiffnes to chassis.” (Ford Endeavour is known as Everest in most part of the world. In India it could not be named Everest due to trademark issues – courtesy Everest Masalas). 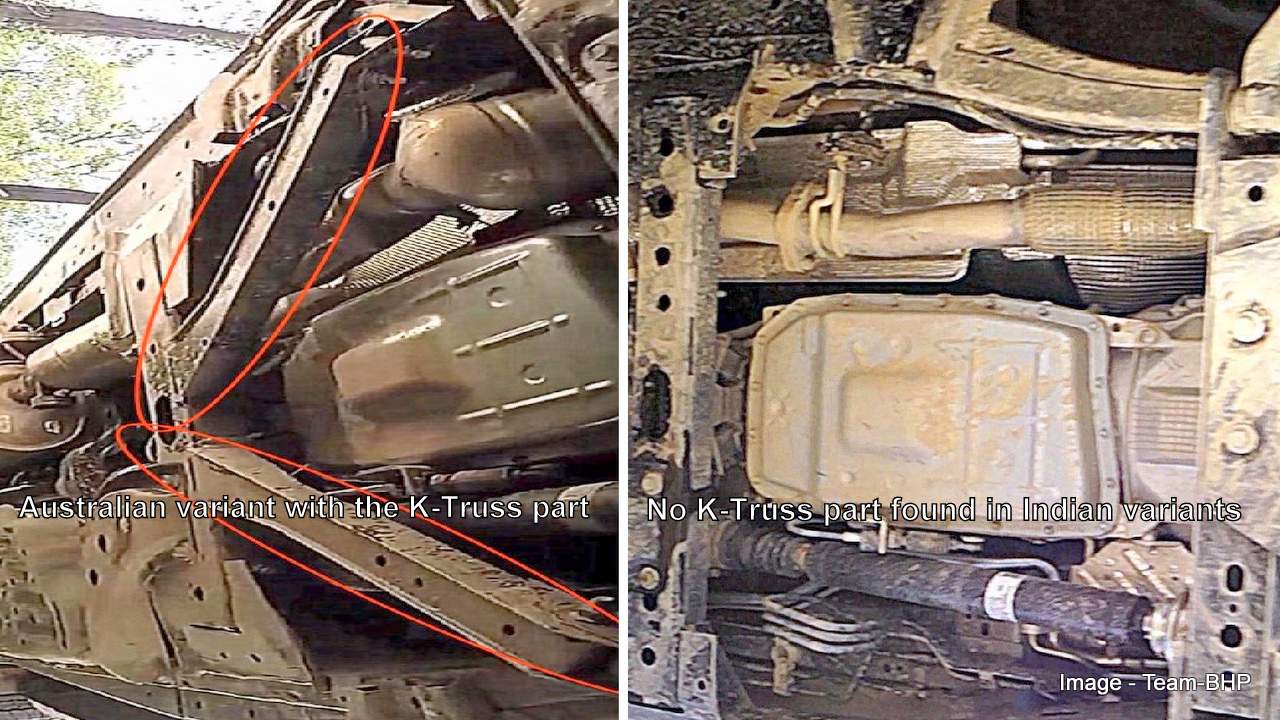 After looking at the video of the expert who had reviewed the Australian Endeavour, ‘AG’ was surprised to see that what the expert was saying was actually true. The Australian-spec Endeavour did have the K-Truss metal part which was there to enhance the chassis, which then helps during off-roading, adding structural rigidity in crash, etc.

Why was such an important part missing in AG’s car? Was it because India does not need cars with extra strength? AG decided to dig deeper into the issue. He looked into his Endeavour’s owners manual. To his surprise, the K-Truss part is featured in the owners manual of India-spec Ford Endeavour.

So in the owners manual, the chassis strengthening K-Truss part is mentioned, but it is not there in reality on India-spec Ford Endeavour. What could be the reason?

The owner of the car, AG states – “The print version of the Owners Manual supplied with the Endeavour also shows the presence of the missing K-Truss. This clearly shows that there is no explanation or mention of this glaring discrepancy in the Indian version of the Everest. It is my belief that with this change in structure, the ANCAP ratings of Everest cannot represent the Endeavour in true sense. This is the first time I have observed a structural deviation in the Indianised version of an International vehicle. This in my opinion shows manufacturing double standards for premium vehicles as well that are sold in India and are built abroad. Safety is one of the pillars that Ford India promotes as a key differentiating aspect of their products for the Indian market. Cutting costs on the chassis itself by removing these members and thereby affecting the overall strength and rigidity of the vehicle leading to a compromise in the safety is disappointing.”

Another member, n.devdath points out – “This will definitely affect chassis performance, not only in crash tests but also under offroad conditions. Also, it comes across as pretty stupid for the owner’s manual to show a different chassis layout than what is sold without any disclaimers whatsoever.”

GTO writes – “Still, while not pardonable, I understand cost-cutting on an EcoSport which has a starting price of ~8 lakhs. But on a premium SUV which has prices overlapping with Mercedes’ & BMWs? Disgusting. Shameful. Ford must learn where to save their pennies and where to spend them. It doesn’t know a thing about selling 30-lakh rupee cars in India if it has stripped them out of such parts which owners will never realise. How much did you save, Ford? 5,000 bucks?”