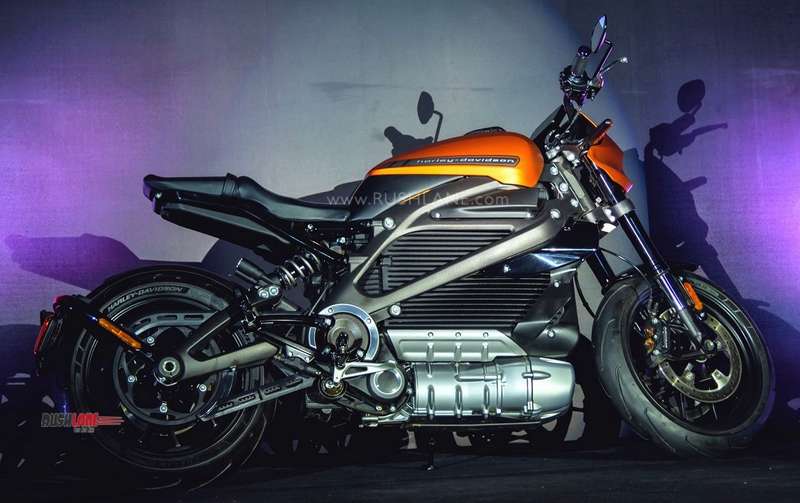 Harley Davidson Livewire electric bike is the company’s first electric motorcycle. Following its global debut, Livewire has now been unveiled in India. It is expected to be launched by the end of this year or early 2020. The company will be taking the bike across cities for a familiarisation tour.

Priced in global markets at US$29,799, and on sale across US, Canada and Europe. Harley Davidson Livewire could be priced at around Rs.40-50 lakhs in India. It is fitted with a battery pack and electric motor and offers a range of 235 kms in the city when fully charged.

Harley-Davidson LiveWire electric powertrain, the H-D Revolution comprises of a 15.5 kWh battery pack. The motor offers 78 kW power or 104.6 bhp and 116 Nm peak torque which is offered right from the start. Being an electric bike, it has no exhaust sound. But there is a sound that the bike emits. Harley says it is a mechanical sound, which does sound like that of a jet engine. The sound is emitted by the electric motor. Watch the video by Ikjot Singh Bhasin below, which reveals the sound of the Harley electric bike.

Livewire is equipped with a Level 1 charger that plugs into a standard 120 volt or 240 volt household outlet with its power cord positioned under its seat. It also gets the latest DC fast charge technology (Level 3). 0 to 80 percent DC fast charge takes 40 minutes. 0 to 100 percent fast charge is done in 60 minutes. However, as on date the fast charger will not be applicable for use when Livewire is launched in India as it can only be used in European and other international markets.

Harley-Davidson LiveWire electric uses a cast aluminum frame resulting in a lighter weight. The electric bike sits on premium co-branded Harley Davidson-Michelin Scorcher Sports tyres measuring 180mm at the rear and 120mm in the front. Suspension is via Showa piston forks in the front and fully adjustable Showa monoshock at the rear.

Braking is handled via Brembo Monobloc front brake calipers with 300mm dia rotors on the front wheel. Harley Davidson Livewire gets a total of 7 riding modes which include 4 pre programmed modes of Road, Rain, Sport and Range. There are also 3 added custom modes wherein power, regeneration, throttle response and traction controls can be customized. Launch in India is in a few weeks, which is when price will also be revealed.