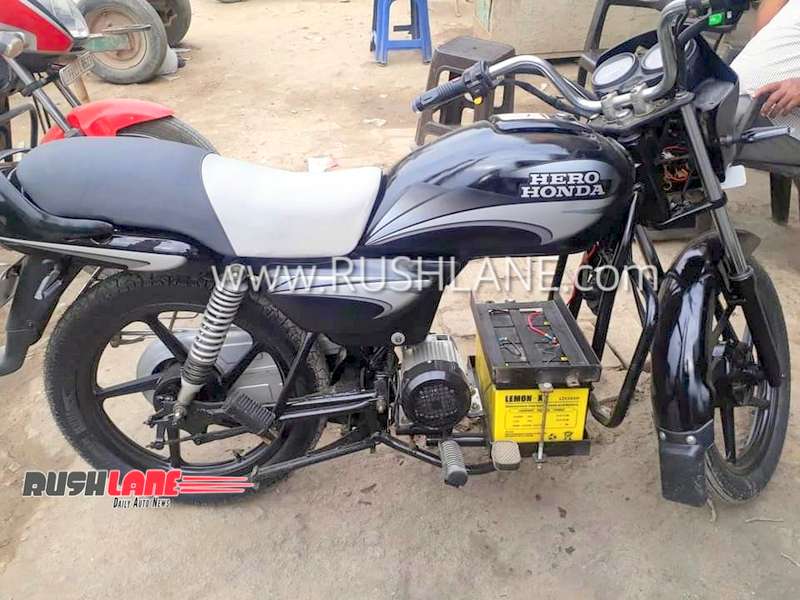 An eclectic range of electric two wheelers have already started arriving in the market and it looks like the existing conventional motorcycles and scooters are about to witness weakening of their appeal.

If the government has its way, we could be bidding farewell to sub-150 cc two wheelers sooner than later. Even if that happens, we would still be left with too many IC engined two wheelers that are already in use. What could be done about them?

Well, a mechanical from Hisar, Haryana, has come up with a potential solution. He simply took a conventional commuter motorcycle, got rid of its petrol engine and replaced it with a battery. A typical ‘jugaad’ that we as a nation is known for. Watch the detailed video of a similar installation below.

He used BLDC motor with speed controller for this modification. He has used deep discharge battery, so there no risk of any blast or fire hazard. Specifications are not known but we could see that the entire system is pretty simple. We don’t see any dedicated power electronics module, so we reckon it is a simple DC motor which derives its current directly from the battery. The motor then drives the sprocket directly without the help of a gearbox.

Also, we don’t see any provision to plug the battery in to a socket directly for charging. We guess, the battery needs to be recharged the same way a dead vehicle battery is recharged (use distilled water, connect the negative and positive terminals using clips to a power source).

Using this Hero Splendor electric motorcycle could be a cumbersome exercise. Moreover, a truck battery (that too used) is not likely to have adequate cycle life for a sustained EV application. While this modified motorcycle is interesting as a garage build, we have serious doubts over its practicality.

For starters, the mechanic has removed the engine and modified the tubular frame to accommodate the battery. We are not sure how much did this modification compromise the chassis’s strength. Total cost of this modification is Rs 7,000 for the e-kit, plus the cost of battery.

Given that the electric motor varies its speed very drastically during normal operation of the motorcycle, the battery is loaded dynamically and this could push it beyond its designed limits, leading to fire, or in extreme cases, an explosion. So, it is imperative to have a properly designed battery, relevant power electronics, and a carefully designed battery management system.

We expect a wide variety of retrofit EV kits for existing two wheelers to be available off-the-shelf in the coming months. We hope, the government intervenes and regulates this segment by allowing only the approved vendors and fitters to make the powertrain swap.