The accompanying video shows a group of young bikers performing stunts on a public road in Rajkot, Gujarat. The bikers who were in possession of entry level and less powerful bikes like the Honda Navi and Hero Splendor are seen blocking the road.

While they are displaying their skills – a crowd of onlookers is gathered around to witness this performance. The stunts continued but the situation soon got out of hand when a civil cop along with a traffic cop arrives on the scene and thrashes a biker with his stick. 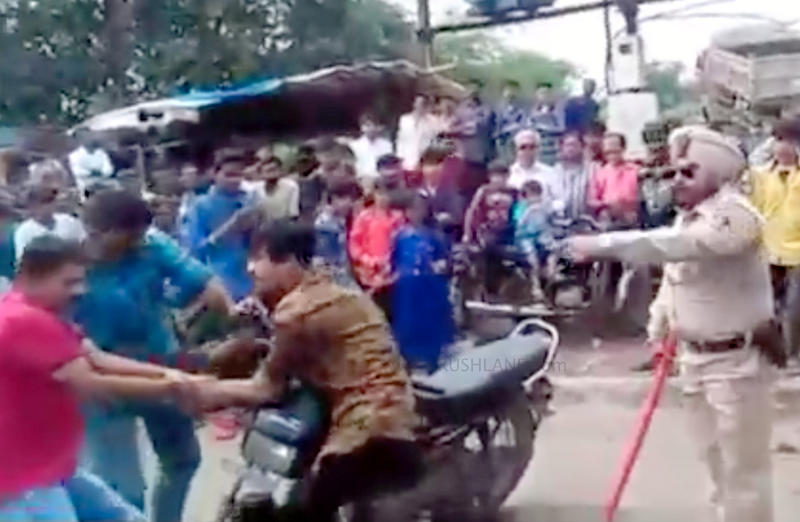 There were already two other police in plain clothes at the scene they are seen holding onto one of the stunt riders while the other cop bashes him badly. While one particular stunt rider was getting all the blows, the other riders quickly disappeared from the spot. It may be noted that none of the performing youngsters wore any helmets or safety gear while performing these dangerous stunts.

Though the cops brought this situation under control, what they did by bashing up the riders was illegal. The police can arrest the riders or seize their vehicles but they cannot resort to hitting. However, with the public blatantly ignoring safety regulations, there have been many such instances when the cops have taken to hitting and bashing up offenders while there have also been cases when the cops have literally pleaded with culprits with folded hands to urge them to follow traffic regulations.

Stunt riding is considered as a sport in some countries, but not in India. The instances of stunt riding are growing in India. There have been many such instances reported all across the country and the riders seen to be oblivious of the dangers involved not only to themselves but to the others on the road. Similar occurrences have been reported in Kerala and Karnataka as well while the cops are conducting surprise checks to bring this dangerous sport under control.

Stunt riding is an exciting sport that has gained popularity in India. There are training centers where this sport is taught. However, every stunt rider is warned that this sport is to be performed in an enclosed area and not on public roads. Many things can go wrong while stunt riding on public roads. Other road users are at risk and the rider puts his own life on the line while performing these stunts sometimes leading to fatalities.