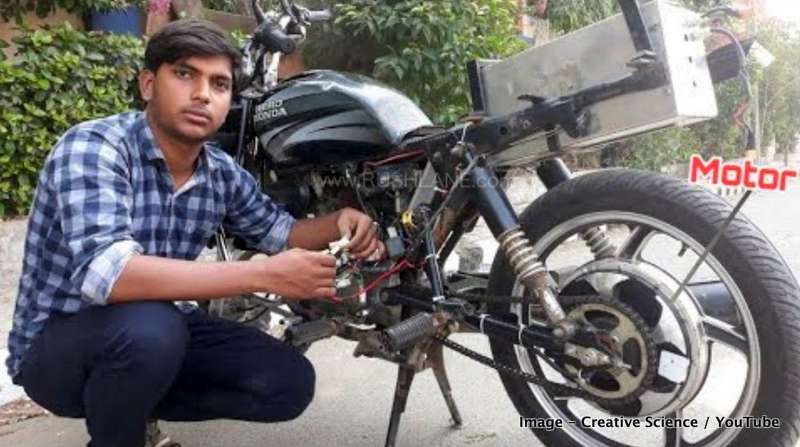 Hero MotoCorp may not have plans to launch a hybrid motorcycle, but an enthusiast has gone ahead and created one using some nifty customizations and aftermarket products. The video uploaded by YouTube channel Creative Science provides detailed information about the steps involved and the various components that have been used in making the hybrid bike.

The modified bike runs both on petrol and electric power. For this customization project, the motorcycle used is Hero Splendour Pro. Most of the major changes have been introduced at the rear and under the seat.

One of the most complex procedures in this customization project is the installation of the battery. Stock seat has been completely removed and the frame underneath has been modified to accommodate the battery.

Stock rear suspension has also been replaced with a longer unit to allow more space to fit the battery. A 72v, 30 amp lithium-ion battery has been used that is claimed to give a mileage of 90-100 km on a single charge. The battery is encased in a steel box for protection against the elements.

Another useful feature is that the lithium-ion battery can be recharged automatically when the petrol engine is running. This in turn will increase the overall range of the bike. The seat looks like a customized unit and it completely conceals the battery. The entire project has been flawlessly executed and at first glance, it’s difficult to identify it as a hybrid electric motorcycle.