Royal Enfield Himalayan modified into a Scrambler – The Marlboro Man

Pune-based Ricochet Motorcycles has transformed a 2018MY Himalayan BS4 into ‘The Marlboro Man’, a capable, go-anywhere classic scrambler

The Royal Enfield Himalayan is easily one of the most desirable entry-level adventure touring motorcycles in the world. Many foreigners consider it as a great starter bike for hardcore offroading. Directly rivalling KTM’s all-new 390 Adventure, the Himalayan was updated to BS6 specifications (alongside a few other tweaks) earlier this year. Ex-showroom prices currently start at Rs 1.86 lakh.

Besides the KTM 390 Adventure, the Himalayan is a key rival or alternative to products such as the Mahindra Mojo BS6 and BMW G 310 BS6 (in final stages of testing) as well. Notable inclusions in the 2020MY BS6 version extend to switchable ABS, hazard switch, new colour choices, sturdier side stand, etc. The dual-sport motorcycle has had a slight drop in output in the process of becoming compliant to the stringent emission norms.

Over the months, we have shared multiple creative examples of the Royal Enfield Himalayan. Examples range from a form-over-function tracker build from Indonesia to the turbocharged MJR Roach in the UK. Here’s another tastefully modded Himayalan, this time from India:

Pune-based custom bike builders Ricochet Motorcycles has given new life to a 2018MY Royal Enfield Himalayan (BS4). The team has essentially customised it into a classic, motorsport-inspired scrambler. Dubbed ‘The Marlboro Man’, the project is almost a year old yet remains timeless aesthetically.

Ricochet Motorcycles states that the basic idea was to create a “go-anywhere motorcycle” after ironing out certain shortcomings of the donor. Starting off with a completely new rear subframe, the Himalayan entered the transformation phase with an aim to reduce bulkiness and improve overall dynamics. The Marlboro Man follows the same colour theme as the American cigarette manufacturer it is named after. To amp up its motorsport traits, Ricochet Motorcycles has also added a race plate sporting “9” (the client’s lucky number). 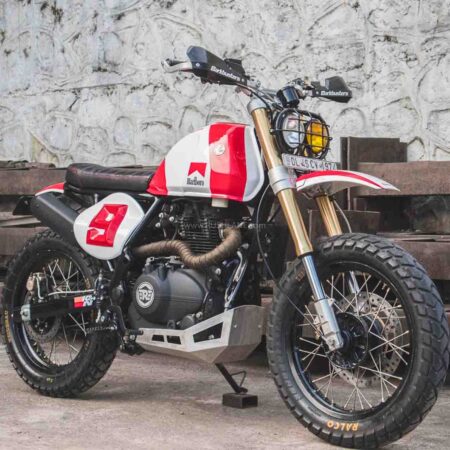 The stock front suspension was swapped with endurance dirt bike-spec USD forks (custom triple tree). This increased the right height by around 50mm while considerably reducing the wheelbase. The 18-inch spoke wheels are shod with 110/90-section Ralco and 130/80-section Heidenau knobby tyres at the front and rear, respectively. Meanwhile, the engine remains mostly the same except for the addition of K&N air filter and a one-off exhaust system, developed completely in-house. 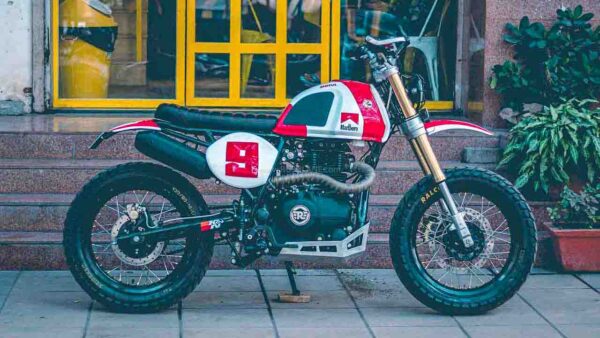